Is now the best or worst possible time for a Death Wish reboot? 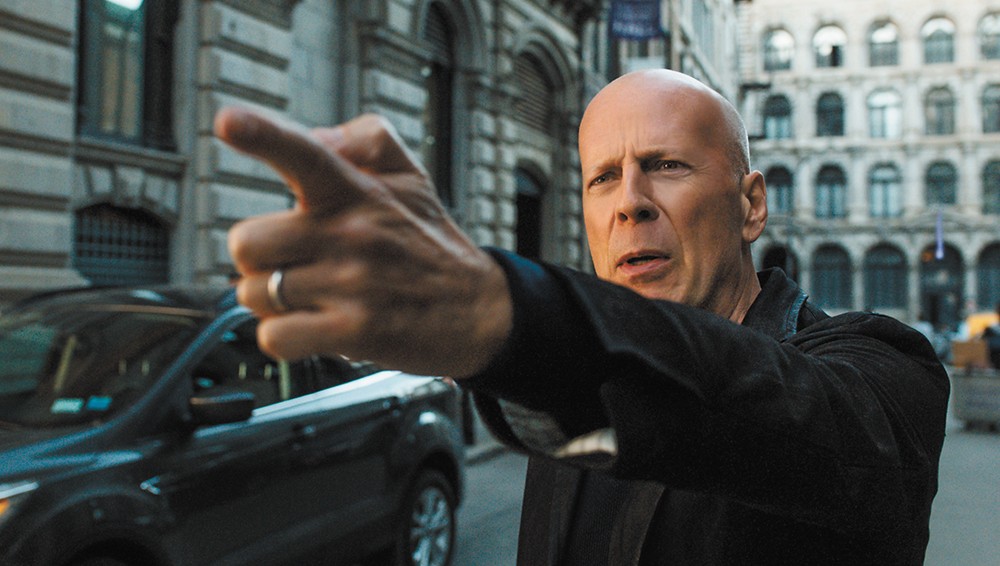 The premise of Death Wish is the same now

as it was nearly 45 years ago.

Paul Kersey is a family man whose world is shattered when his wife and daughter are beaten and raped by a gang of home intruders. His daughter is badly injured; his wife dies. Paralyzed by grief that gives way to anger, Kersey gets himself a gun and starts indiscriminately killing off all the bad dudes scurrying about New York City like so many cockroaches.

The 1974 film, loosely based on a novel by Brian Garfield, exists in a kind of far-right fantasia wherein a liberal softie (played by Charles Bronson) can transform into a ruthless Dirty Harry type overnight. It's the "good guy with a gun" argument in cinematic form. Violence, the movie shows, is a scourge upon society. It is also the only solution.

The original Death Wish has now been remade by gorehound Eli Roth (Cabin Fever, Hostel) and has Bruce Willis taking on the Bronson role. It was originally slated to hit theaters last Thanksgiving, but its release was stalled just a few days after a gunman opened fire on a Las Vegas music festival on Oct. 1. MGM, the studio distributing the film, didn't cite the massacre as the reason for the delay, but the timing couldn't have been incidental.

And now Roth's Death Wish is finally in theaters, right on the heels of yet another mass shooting, this time in Florida.

Watching one of the film's trailers, in which Willis legally procures an arsenal of weapons while AC/DC's "Back in Black" rip-roars on the soundtrack, I had a thought: Why this movie, and why now? It's not just that I'm suffering from a perpetual remake hangover; I don't know if I want to sit through a ridiculous thriller about how easy it is for a middle-aged white guy to become a self-employed one-man army.

I looked back at the original Bronson-starring Death Wish out of morbid curiosity and found a troubling but fascinating snapshot of America's anxieties in the early '70s. It's like finding an old Polaroid yellowing in a shoebox: Director Michael Winner's film captures the griminess and uncertainty of its era, when TV news reports of skyrocketing crime rates, the war on drugs and the intensifying Watergate investigation were the norm.

Of course, the movie's attempts at gritty, urban realism are kneecapped by the sheer ridiculousness of its action set pieces: Everywhere Kersey goes, he not only encounters menacing, leering muggers and murderers but seems to be emanating some kind of pheromone that attracts them.

That absurdity is only amplified in the four(!) Death Wish sequels, which descend further and further into some kind of fascistic hellscape. What's so strange about them is that they're hilariously outlandish and queasily violent at the same time, and their treatment of women is particularly nauseating: Female characters exist in the Death Wish universe only to be brutalized so Bronson can go on another rampage.

It's easy to laugh at the general incompetence of the Death Wish series, but it's also difficult to ignore the poisonous morality and murky politics at its core.

I can't imagine Roth, one of contemporary cinema's least subtle practitioners, bringing much nuance to this dusty old formula, though I'm willing to keep an open mind. (As of publication, the film hasn't been screened for critics.) And perhaps it's unfair to make an example of the new Death Wish when so many movies now playing (Black Panther, Game Night, Red Sparrow, Annihilation, even Fifty Shades Freed) revel in gun violence.

But the very conceit of Death Wish seems wildly out of place today, so glib in its presumption that the law only exists to be usurped. Will this new iteration, like its forebear, find something — anything, really — to say about the violence it's depicting, or will it merely try to titillate us with it? Either way, do we need it? ♦

The original print version of this article was headlined "Die Harder"

Death Wish is not showing in any theaters in the area.