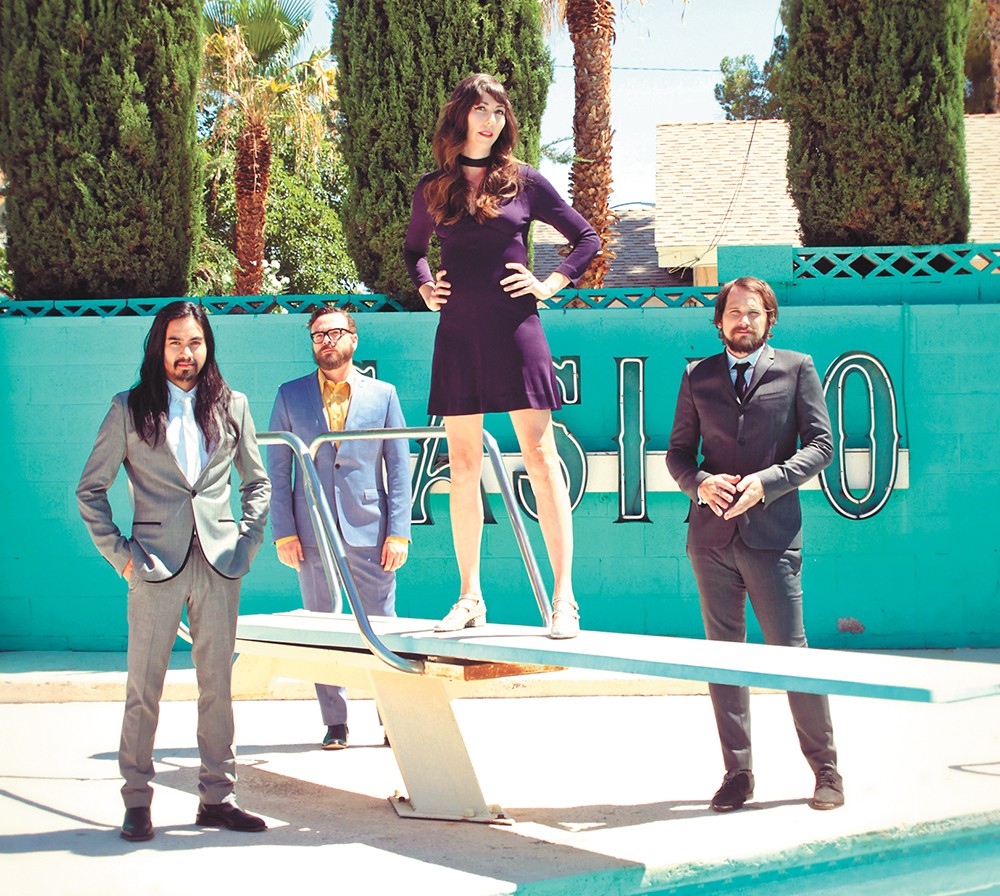 It's a popular narrative that "rock is dead,"

or at least, guitar-based music isn't as relevant as it was even just 10 years ago. Joe Lester says that's true to some extent: Now, electronic dance music producers have greater influence on the Top 40 than guitar-pickers. But as the keyboard player for long-running modern rock band Silversun Pickups, Lester knows that trends in popular music go through surprisingly short cycles.

"You can see it by playing festivals every third or fourth year," he says. "Like, there's a whole bunch of bands on the bill one year, and then two-thirds of them aren't around anymore." Flavors of the month come and go and sometimes guitar bands are relatively dormant, "but people still like rock music," he says.

Indeed, if rock was dead, Silversun Pickups wouldn't still be around. The L.A.-based four-piece formed in 2000 and became indie-rock darlings after releasing their debut album, 2006's Carnavas, which featured the singles "Well Thought Out Twinkles" and "Lazy Eye." The latter went into heavy rotation on college and alt-rock radio stations, which was remarkable because it clocks in at just under six minutes and doesn't have a chorus to speak of.

He spoke with the Inlander during a break before the band embarks on a lengthy North American tour, including a date at the Knitting Factory on Halloween night.

Lester was born in Seattle, but moved to Indio, California, when he was 11 years old. There wasn't much of anything to do out there in the desert while he was a teenager, but the town has since become the site of the Coachella Music Festival.

"It still f---s with my head every time we play that festival," he says, "because it's literally, like, 15 blocks from my mom's house."

Lester learned to play guitar as a teenager, but, in his own estimation, not well. He was, however, still super into music. After moving to L.A. for college, he became a regular at underground and indie-rock shows and started playing bass because it "had fewer strings and was less confusing." He joined the indie-rock trio Pine Marten, which regularly split bills with the Silversun Pickups' original lineup.

"We were all really good friends, played together all the time," Lester says. So in 2002, when his band fell apart and Silversun reshuffled its roster, he was an obvious pick-up — but they didn't want him to play bass: "They were like, 'Do you want to play keys?' And I was like, 'Sure?' I didn't really know how to play keyboard, so it was really learn-as-you-go."

Without any sort of classical training, Lester mostly relied on making crazy synthesizer noises that melded into the sound of frontman Brian Aubert's overdriven guitar.

"You couldn't necessarily tell where the guitars started or the keyboards ended; they would sort of wash together," he says. "But as I've gotten more accomplished as a programmer and with playing, we've sort of drifted away from that. I've taught myself a lot and my playing is more distinct now."

As the band's catalog of songs has grown — they've recorded more than 60 — it could be tempting to leave old hits like "Lazy Eye" out of the set, but "that would be kind of a dick move," Lester says. "Just because we've played it 4,000 times doesn't mean people at the show have heard it that much."

He says that all four members of the band are grateful that their songs have connected with such a wide audience, allowing them to continue the cycle of touring and recording.

"When you tour, it's 11 or 12 people all living on a bus, and we have this joke that there's no f---ing way grown adults who aren't married should spend that much time together," Lester says. "It takes a certain kind of person to want to do that in the first place, and it helps that we were all friends beforehand, and we all still like each other now.

"That's the biggest part — making music together is still exciting." ♦