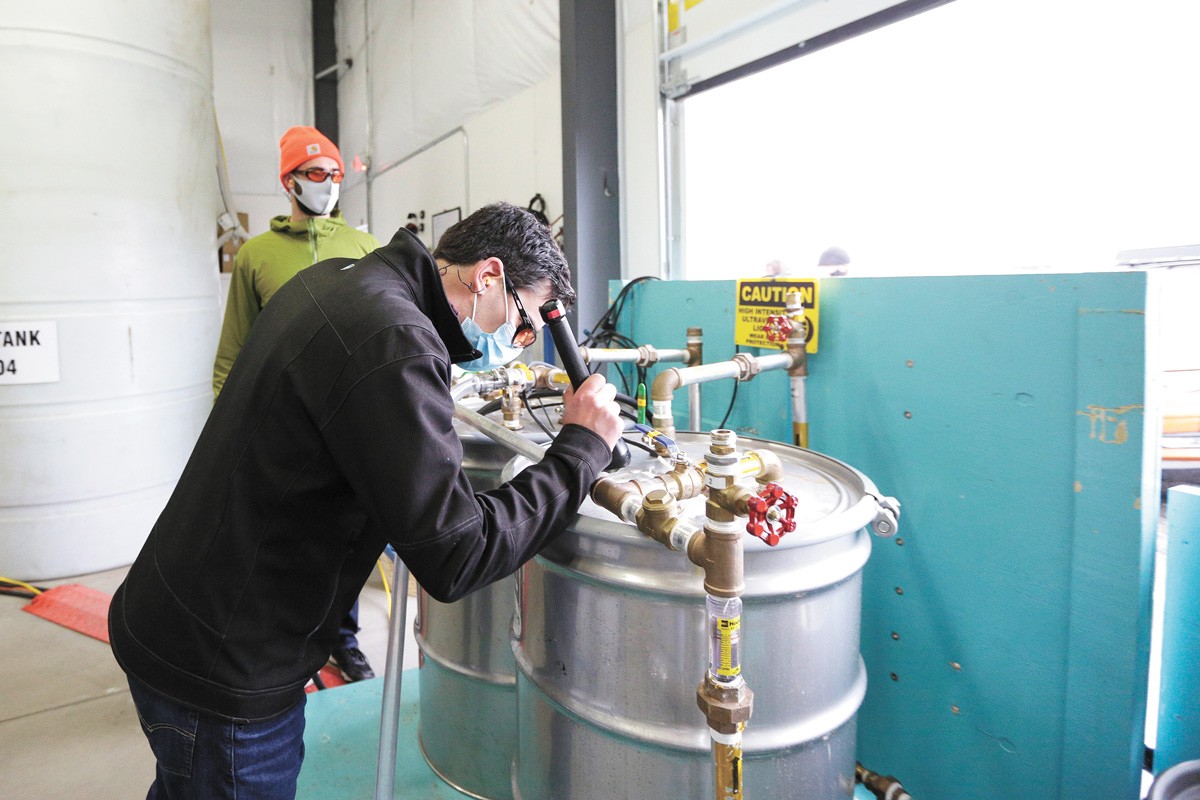 Young Kwak photo
Geologist Ward McDonald checks the water level on a system designed to break down PCBs found in the ground at Kaiser Aluminum.

A few years ago, environmental staff at Kaiser Aluminum were faced with a big decision: Keep filtering contaminated water through a less-than-perfect walnut-shell system, and scale that up to a larger size, or search for a better solution.

While more steps remain in a pilot test pitting one advanced technology against another, it appears that they may have found one that's far more efficient at the long-term goal of eliminating contamination.

For years, the company's Trentwood location in Spokane Valley has been dealing with a massive groundwater plume contaminated with toxic polychlorinated biphenyls (PCBs). The legacy contamination built up over decades of operations at the plant, which was originally built by the U.S. government during World War II. Over the more than 75 years since, the plant has been used to manufacture everything from aluminum sheets and plates used for airplanes and aerospace technology to aluminum products used to make beverage cans, cars and other consumer items.

Although they haven't been used in decades, PCB-containing additives were for years put in machinery oils to reduce flammability and create a safer working environment. Some of that oil leaked over time and contaminated the site. Other manufacturers in the area used similar PCB-containing materials, so the groundwater under Kaiser's plant also gets added contamination as water flows through surrounding soil.

To deal with the problem, Kaiser has conducted multiple interim cleanup projects removing and capping soil and then setting up a pilot water treatment plant under an agreement with the state Department of Ecology. The first pilot filtration system, which has been running since 2015, uses castor oil (created from castor beans) and walnut shells to grab PCBs out of water that's pumped up from the plume.

But while the walnut-shell system captures about 70 percent of PCBs, it really moves the problem from one medium to another, from the water to a solid waste product, explains Brent Downey, Kaiser's environmental affairs manager.

The contaminant-covered walnut shells then have to be taken to an approved landfill (currently Waste Management's Graham Road Recycling and Disposal site in Medical Lake).

So before building an even bigger walnut-shell system on the scale needed to treat water for years to come, Downey says the team at Kaiser researched a literature study and proposed to Ecology that they test a new theory using ultraviolet (UV) light.

Researchers had shown, on paper, that UV light in combination with hydrogen peroxide could actually break down PCBs.

So since late 2019, Kaiser has been working to test the theory, with a small custom-built system and a shelf-ready system treating contaminated water at the plant. With about 103,000 gallons going through the UV system so far, the results have been so promising (with potential to break down more than 90 percent of PCBs) that it's gaining attention at Ecology.

"When I shared this with my colleagues at Ecology across the state, their eyes and ears perk up, and we're all very excited about its potential to degrade PCBs and possibly other concentrate compounds," says Jeremy Schmidt, Ecology's site manager for the Kaiser cleanup. "We couldn't possibly be more excited."

PROMISING NEW USE OF OLDER TECHNOLOGY
Technically speaking, it's not a novel idea to use either hydrogen peroxide or UV light to treat contamination. After all, one of the UV units now treating 25 gallons per minute of water at Kaiser's pilot plant was available on the market, and Schmidt notes that his master's thesis was on adding hydrogen peroxide to soil to break down chlorinated solvents.

However, it's the combination of both high-intensity UV and the "advanced oxidation process" using hydrogen peroxide that makes this pilot unique.

"The technology isn't that different than some of the technologies we used in the past in some ways, but then it's very different — it uses hydrogen peroxide and UV which creates a radical," Schmidt says.

The radicals then break down other compounds.

After a small 5-liter batch test in a lab in fall 2019 confirmed the academic theory that UV could be used to break down PCBs, Kaiser got approval from Ecology this spring to test a new pilot. The company invested in an off-the-shelf UV unit and commissioned its own UV system created by ecoSPEARS, which for now treats about 3 to 5 gallons of water per minute. The UV systems came online in June and have continued through this fall as workers figure out each system's potential efficiency.

The way Kaiser's treatment works now, contaminated water is pulled up from the plume, run through either the walnut shell or UV treatment, then pumped back to a small area at the north end of the site to naturally infiltrate back through soil and rock into the groundwater. From there, it will eventually be treated again.

Ecology doesn't want any cleanup to take forever, Schmidt says, which is why the agency asked Kaiser what the full-scale plan should be after the first pilot with walnut shells had been going on for a few years. A full-sized treatment process that can more quickly address the underground plume needs to be in place on the roughly 60-acre property by 2023.

While Kaiser refocused energy on testing the promising UV technology, it's still not clear yet which option the company will go for when it comes to that permanent option.

Downey says the options are still being considered and the cost considerations of each haven't been determined yet.

It's also not clear yet exactly which compounds the PCBs are breaking down into, though in theory it's likely biphenyls, carbon dioxide, water and some salts, Downey says. Ecology will require a clear picture of exactly which compounds are created as a byproduct, as well as analysis of their toxicity, before this technology could be selected as the final option.

"They're at such low levels that we're unable to see all of them," Downey says. "What we can actually see is the fingerprint of the PCBs going downward."

On average, the amount of PCBs going into the pilot systems has been between about 200,000 and 300,000 picograms per liter or parts per quadrillion (ppq). Coming out, the threshold they're trying to hit (until one is set in an official legal document with Ecology) has been under 44,000 ppq, which is allowable for drinking water.

With some removal of PCBs over time already thanks to the walnut filtration, the UV system saw an average of 210,000 ppq coming in, and the water going out was below that 44,000 threshold, Downey says.

That figure is still significantly higher than the rules for surface water, such as the Spokane River, which are much more restrictive, and require that water flowing into the river from polluters contains no more than 170 ppq, since the chemicals bioaccumulate in fish over time. Multiple polluters into the river (including a different permitted system Kaiser operates) are working on long-term plans to come into compliance with that very low threshold.

Still, the promise to destroy PCBs rather than just move the problem from one place to another appeared promising to some in the environmental community when the project was up for public comment this spring.

"This approach has shown a good potential to destroy [PCBs], which is superior to capturing and removing the [PCBs]," Mike Petersen, executive director of The Lands Council, wrote to Ecology on April 19. "We appreciate the willingness of both Kaiser and the Department of Ecology to try this new treatment and believe that it has the potential to be used in many other settings across the country."

Kaiser staff didn't want to say yet if they're planning to share or market the UV technology should it prove highly effective at destroying PCBs, but Jason Walsh, senior vice president of manufacturing, says the company is exploring lots of options. Background information has been shared with other entities looking to address legacy contaminants.

"We need and want to be a vibrant member of the community here, so we need to work on these actions and be a responsible citizen here in the Valley and beyond," Walsh says. "We're working on the cleanup, and we know it doesn't happen overnight, and we're prepared to keep continuing." ♦