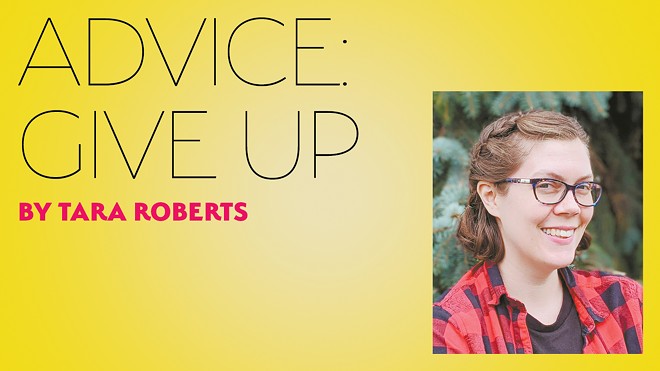 Once I burned a fried egg so badly I threw the whole thing, pan and all, into the snow on my back porch.

It stayed there for weeks. At first it was a symbol of failure: coal-colored, crispy-edged evidence of my inability to do a simple thing. Soon it took on a whiff of legend. My kids would side-eye it, nestled in its puddle of slush, as they went out to play. I imagined their thoughts: Did you see how she just chucked it out and shut the door? Unpredictable, dude. You never know what she's going to do.

By the time I moved the pan from the porch to the trash, it was an affirmation. The pan was irredeemably scratched, lumpy and rusting, even before I cemented an egg to it and tossed it into the elements. I'd hung onto it out of guilt or habit, I guess. My dramatic move confirmed what I should have known before I tried to fry the egg at all: I needed to give up that pan a long time ago.

Now, the easy metaphor here would be to make 2020 our cruddy frying pan, ready to be shown the door forever. But I'm not willing to say the year was irredeemable. It was weird and exhausting and often terrible, but I managed to fry a few decent eggs in it.

What I'm going for with the pan is one of those figurative eggs, a lovely nutritious lesson cooked to perfection by 2020: Sometimes it's good to give up.

Like all humans, I'm a big fan of good intentions and comforting illusions. The year that we all just survived forced me to give up so, so many of them.

Here's a small one: As a child of the 1980s and '90s, I swore my family would eat dinner at the kitchen table, not in front of the TV. It was one of the last perfect-parenting items I clung to, long after letting go of "no video games on weeknights" and "my children will fold their own laundry." (Haha no. Ever seen a 9-year-old try to fold a T-shirt?) After 2020, the TV trays are falling apart from overuse. One Sunday my kids ate lunch, dinner and an unholy number of snacks parked on the couch to binge a season of Survivor. We had a blast. I gave up, and everyone's fine.

A bigger one: I always liked to think of myself as adaptable and resilient. But up to this point, the curveballs life threw at me were pretty straightforward and common. I said I had learned everything is fragile, everything is uncertain. I don't think I really understood the extent of what that could mean until 2020.

I watched the pandemic dismantle every aspect of my children's lives outside of our home. I am privileged to still have a job, but it looks wildly different than it used to. I haven't seen my extended family for months. Little wonderful things I never thought would go away, like going to the movies or singing in church or having a beer in a friend's kitchen, stopped overnight. Other people have lost all this and much more.

The pandemic changed massive spans of life, all at once, for an unknown time, for everybody (even the people who like to pretend it didn't). Every time I thought the finish line was in sight, it crept farther away, until it was so fuzzy and distant it was hard to believe it existed. The truth is, I need to give up the finish line and a whole array of other benchmarks, demands and expectations. I need to give up, for real and not just in principle, the illusion of control.

I asked my friends what they're happy they gave up in 2020. Their answers were funny, honest and true. Fast food. Facebook. Reading the comments on Facebook. Shaking hands. Shame. Feeling obligated to justify saying "no." Silence in the face of racism. People-pleasing. Choosing to be miserable. Underwire bras. Toxic friendships. Debt. Pants. And — from a friend who lost her job at six months pregnant in the middle of a pandemic and understands this way better than I do — an echo of my own thoughts on control.

So I'm declaring 2021 the year of giving up even more. Find your illusions, your expectations, the cruddy frying pans you're still hanging onto out of guilt or habit. Chuck them out the door and don't look back. Grin as people watch in awe. Unpredictable, dude. You bet — after all, everything is. ♦

Tara Roberts is a writer and college journalism adviser who lives in Moscow with her husband, sons and poodle. Her work has appeared in Moss, Hippocampus and a variety of regional publications. Follow her on Twitter @tarabethidaho.

The original print version of this article was headlined "Advice: Give Up"

Speaking of Now What , Essays