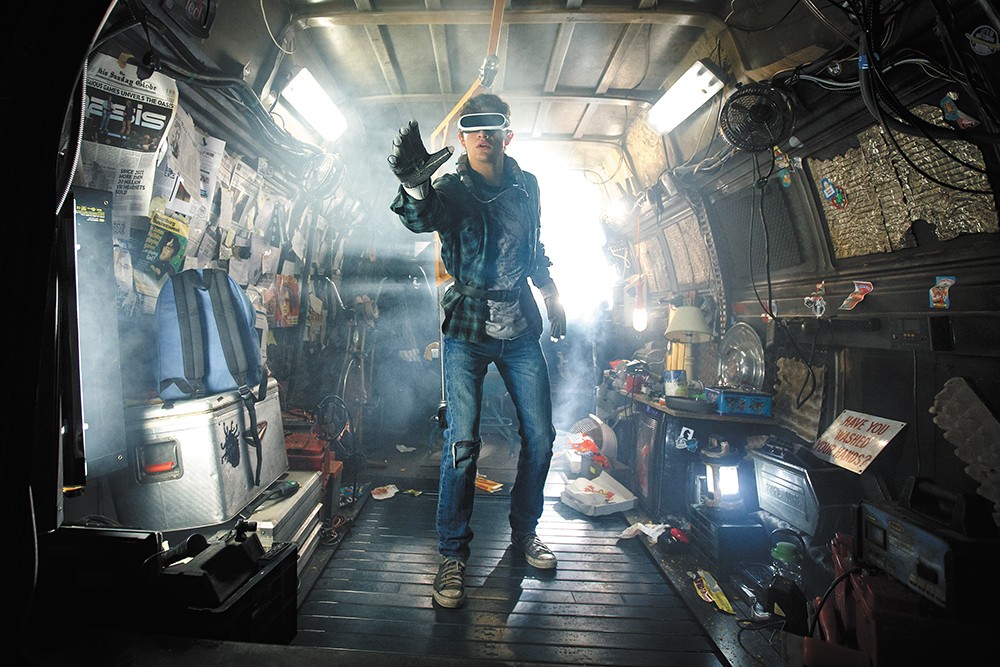 In the world of Ready Player One,

minutiae is the ultimate weapon. The more nerdy pop culture facts you've got hardwired into your brain, the more powerful you can become.

It's the future — 2045, to be exact — and our crumbling society has escaped headlong into a digital utopia known as the OASIS, part open-world environment, part virtual reality video game. It's also the setting of history's most elaborate scavenger hunt: The OASIS' late programmer, a reclusive genius named James Halliday (Mark Rylance), has hidden a trio of Easter eggs within his creation, doling out clues that tacitly refer to the 1980s music, games, comic books and movies he loved.

Find all three hidden keys and you'll be rewarded with a significant stock in the OASIS fortune.

That Willy Wonka-meets-Tron premise originated in Ernest Cline's bestselling (and oft-derided) 2011 novel, and it's been translated to the big screen by director Steven Spielberg, perhaps the only living filmmaker whose work has inspired as much fervent fandom as George Lucas. It's pure geek fantasy, in which challenges are won not with brawn but with your knowledge of secret rooms in Atari games.

Our hero is typical of Spielberg's ouvre, a so-ordinary-he's-extraordinary teen orphan named Wade Watts (Tye Sheridan). He resides in the Stacks, towers of interconnected trailers that stretch up for hundreds of feet amidst piles of twisted metal and decaying trash, and spends days at a time within the OASIS, playing as a silver-haired daredevil named Parzival and exhaustively studying Halliday-related trivia.

Rival corporations have employed staffs of hundreds to try and crack Halliday's puzzle, but nobody has come close. And then Wade has an a-ha moment and solves the first clue, and more gamers follow, including sniveling tech CEO Sorrento (Ben Mendelsohn) and the beautiful Art3mis (Olivia Cooke), a motorcycle-riding badass and inevitable love interest.

Much of Ready Player One is set within the OASIS, and the computer graphics and motion-capture effects, overseen by Industrial Light and Magic, are as expressive as I've seen. Spielberg has a lot of fun with the elasticity of his digital environs, and his camera — or its digital equivalent — never stops moving: A first-act car race, which includes such obstacles as a lumbering Tyrannosaurus rex, a building-hopping King Kong and speeding L trains, is pretty exhilarating and recalls that breathless chase scene through Morocco in Spielberg's animated Tintin movie.

The rest of the movie doesn't quite measure up to that sequence, though, settling into a straightforward rebels-versus-bureaucracy narrative we've seen before. The human element of the story is also frustratingly hollow: Wade is a seriously dull protagonist, but that's almost by design, as if he's a blank avatar we're meant to project ourselves onto.

And then there are the rampant pop culture references, which were all over the book and have been criticized by some as lazy name dropping. Characters frequently (and shamelessly) plug the cult properties that define them — Akira, Buckaroo Banzai, The Dark Crystal, the ouvre of John Hughes — and pay homage to long-forgotten cultural ephemera. (Remember Madballs? Doesn't matter, because Ready Player One sure does.) It's like being stuck in a game of nerd Mad Libs.

It doesn't feel quite as clunky here as it did in the novel, but try not to cringe at an awkward dance sequence inspired by Saturday Night Fever, or a moment in which Parzival holds a boombox aloft like John Cusack in Say Anything and blasts Twisted Sister from it. Other tributes are more elaborate, but no less goofy: There's an in-game upgrade called a Zemeckis Cube, which rewinds time and comes installed with Back to the Future musical cues, and a middle sequence that's an extended riff on Stanley Kubrick's The Shining.

That Kubrick bit is, I think, representative of the whole endeavor: It's clever for a minute, but then it just keeps going. Although it's always barreling toward the finish line, the movie feels a bit baggy at 140 minutes, and the energy runs out before the film does.

But this is unmistakably a Spielberg product, and his fingerprints are all over it. The trademarks of his regular cinematographer Janusz Kaminski are everywhere (dig that harsh light that's always streaming through the windows), and he adopts a visual language that recalls his collaborations with Spielberg from the early 2000s, namely Minority Report and A.I. Artificial Intelligence. And save for the soundtrack of retro-pop hits (Prince, Hall and Oates, New Order), Alan Silvestri's score sounds an awful lot like vintage John Williams.

The style does elevate the material a bit, although I doubt the basic parts of Ready Player One could have ever been assembled into a truly transcendent work of cinema. It's shiny escapism and nothing more, so its attempts at shameless sentimentalism (and it wouldn't be a Spielberg film without that) simply don't work.

Ready Player One isn't the calamity it could have been, but it's still mid-tier Spielberg, a glossy Saturday morning cartoon on a blockbuster budget. It's sort of fun as far as it goes. I wonder how much replay value it'll have. ♦

The original print version of this article was headlined "Virtual Boy"

Ready Player One is not showing in any theaters in the area.

Speaking of Ready Player One 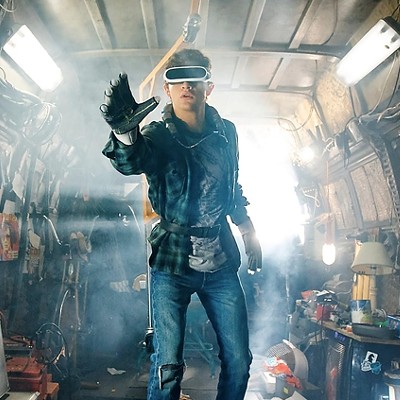