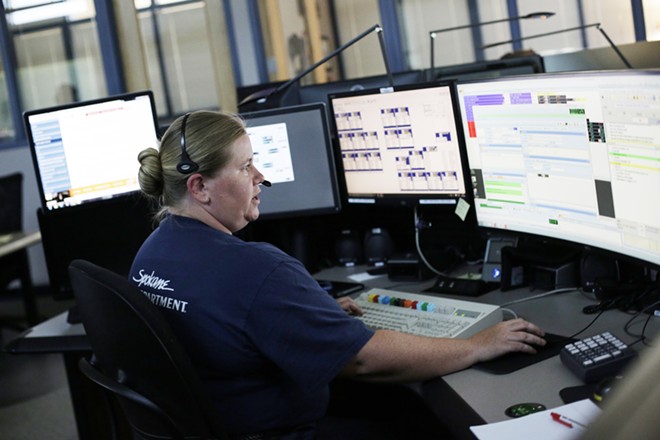 Last week, Inlander staffer Daniel Walters wrote a story about a potential plan to streamline emergency dispatch services in Spokane County. To recap, Spokane County emergency services are attempting to decrease the amount of time between when the dispatch center is called and when first responders arrive on the scene. Right now, it takes them about 2 minutes and 40 seconds. Walters reports:

“A coalition of local government officials have moved toward creating a new public development authority — tentatively called SPOCOM — to take all the pieces of the current 911 system and put them under one organization."

It turns out, this is a hot-button topic among our readers. The Inlander received more letters to the editor regarding this topic than normal.

Below you can find those letters, edited for clarity and length, responding to the article: “One Call, That’s All: Will a Plan to Combine All the 911 Dispatch Agencies in the County Save Lives or Cost Them?”

Several employees took issue with the claims made by supporters of the proposal, arguing that they didn't understand the current system.

A LACK OF TRANSPARENCY:

This is in response to the 911 article on July 26th: As a fire communications specialist for the Spokane Fire Department for 20 years, I am very surprised and shocked at the amount of incorrect information given about the process and duties of dispatchers, along with the lack of interaction by the people planning this [integration] process. If this change is for the better, you would think that it would be transparent, and it has not been.

There have been multiple meetings, including the most recent Strategic Positioning Meeting, which is a meeting where there is only one out of 29 people attending that represent the people on the floor doing the job. I am also very saddened by the fact that I have dedicated my career to the Spokane Fire Department and to the citizens of Spokane and the surrounding communities during emergency times of need, yet those pushing this proposed integration are not looking out for the public's best interest nor the employees that serve them. Thank you.

Commissioner Al French implies that we should overlook failed efforts at integration and move forward.

Taxpayers voted for an increase in the 911 tax to improve services that are essential to maintaining order and saving lives. A lot of that money has already been invested in employing a consulting firm, travel to look at already-integrated centers and recruiting a director. This suggests the integration committee is only considering evidence that agrees with its purpose of creating a new agency and integrating the already-established services. If the integrated model is best, it should withstand the comparison to those centers which have integrated and, finding it wanting, have returned to a specialized dispatch model. New York City is one such example. A thorough examination of why they failed could only improve the existing specialized center or a successful integration. Spokane’s City Council has repeatedly asked questions which remain unanswered. The current approach is and if they are going to spend the money, they must consider both sides of the equation. ...

Our current system is not broken. Could it improve? Certainly. It appears, though, that the integration committee has not considered implementing measures that could affect that improvement without completely scrapping the services already in place.

Regarding the July 26 article about the plan to combine 911 dispatch agencies:

The process to [integrate] has been exceedingly fast — consultants have been hired, a PDA has been formed and an executive director named, with no participation from actual dispatchers. No costs have yet been discussed or disclosed and requests for information by Spokane City Council have gone repeatedly unanswered.

Bryan Collins, Spokane Valley's fire chief, quipped that it can be frustrating to be asked the same question multiple times during a 911 call. He is referring to the address verification process, an extremely important piece of information to get right. And yet, in fact, we've recently streamlined it. It has significantly cut down on response times. As a fire dispatcher, I can personally vouch for it shaving about 15-20 seconds off of my dispatch times. Seconds count. ...

There is plenty of data and anecdotal evidence to show that our current, already integrated system is working. Yet improvement should always be welcome in any organization. So let's take the time necessary to be sure we actually have a problem before we throw the current model out and start over. Improvement may mean just a technology upgrade. Let's make sure the public is going to continue to receive the very best service we can give them and take the time to do it right.

This is in response to the article on consolidating the 911 dispatch center. This idea of consolidation has been tried numerous times with the same outcome: failure. If this was a good idea, then it would have worked a long time ago. This is not a good idea, period. The article said this time it is more political, which is very much true. The city of Spokane's Mayor’s Office is pushing for this to happen quickly because its term is up at the end of 2019.

The board of directors and all the stake holders want this to happen quickly and they are pushing it along as well. They have hired a director for a consolidated agency, but not all of the city of Spokane's employees and unions feel this is the best direction. The City Council has passed an ordinance to suspend consolidation until questions have been answered. Questions that have been asked by employees, unions, City Council members and others. Those questions have not been answered and are usually responded back with more questions and no answers. City Councilman Mike Fagan said it best: "We ain’t paving some streets here. We’re talking about saving lives."

The article suggested the system is broken, or that is what they tell us. That is completely wrong. ...

The article mentioned that communication between fire and law enforcement is complicated. Well, it’s not. A few years ago, the entire county purchased new Motorola radios that allow for various agencies and counties (including a few in North Idaho) to communicate. ... Our new phone system was also updated around the same time, which is now all computer based. We have stopped dialing seven-digit numbers when we call other agencies. We push one button and the phone calls who we want it to call. The only time we dial seven or 10 digits is when we are typically calling a citizen to answer their questions. ... Fire Chief Bryan Collins stated that it can be frustrating to continually be asked the same questions when you call 911. That is true, and we in dispatch experience that daily. The solution to that would be to train the call-takers in asking the questions that first responders need to ask. ...

Fire Chief Brian Schaeffer stated that this consolidation will likely not save money. He is correct. This will likely cost more money in the first years or longer. Then why is this still going on? If it won’t save money, where is the benefit? Those are questions that have been asked numerous times, and yet... We still get no answer. ...

This letter is only my opinion on the consolidation of emergency dispatch in Spokane. Thank you for taking the time to read this.