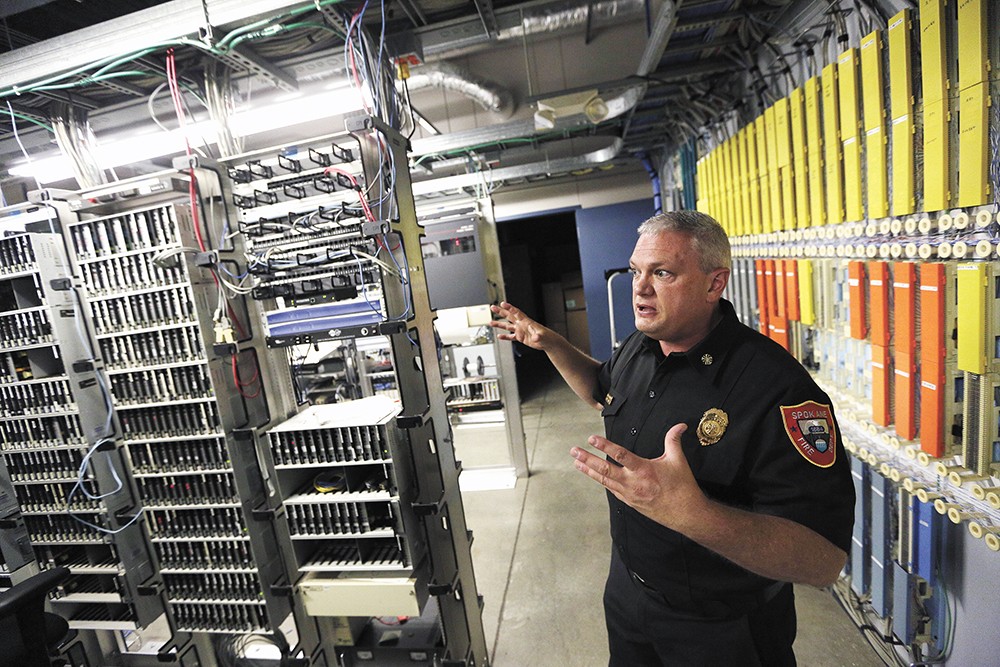 Spokane Fire Department Chief Brian Schaeffer has an experiment he says he conducts when he talks to groups of children: "OK, everybody. Close your nose and hold your breath," he tells them. "How long can you hold your breath?"

The point is to show the kids how much speed matters when responding to a stroke, heart attack or respiratory event.

"Your brain starts to die after a lack of oxygen," Schaeffer says. "Five, six minutes your brain dies and you can't recover from that."

In Spokane County in 2017, two minutes and 40 seconds passed on average between when callers dial 911 and when emergency services were dispatched. In other words: If the emergency services can speed up those phone calls — make the dispatch system more efficient — lives can be saved.

That's exactly what they're trying to do.

By Sheriff Ozzie Knezovich's count, in the last dozen years, this is the sixth time the public safety agencies across the region have looked at combining all the different 911 dispatch systems — 911, police, sheriff and fire — under one agency. Or maybe even the seventh.

But this time, it seemed like there was more momentum — and political support — than ever.

Last year, the Spokane City Council and the mayor endorsed developing an "improved integrated response to emergencies" as an explicit part of the city's strategic plan, while voters approved a sales tax. A coalition of local government officials have moved toward creating a new public development authority — tentatively called SPOCOM — to take all the pieces of the current 911 system and put them under one organization.

But last week, the Spokane City Council unanimously passed an ordinance that would prohibit the city from signing any agreements about the combined communications center without council approval.

Even Spokane City Councilman Mike Fagan — a conservative who generally opposes attempts by the City Council to constrain the mayor's office — signed on to the City Council's effort to slow down the push for an integrated dispatch center.

"The biggest question that I've got — no one has explained to us what the value to the citizens is," Fagan says. "We've asked some questions. With all due respect, folks, we haven't gotten any answers."

So far, SPOCOM is moving forward: A conditional offer to an executive director to run the integrated dispatch center has already been made.

But Spokane police, fire and other city employees, have raised serious objections. They say the group pushing for an integrated 911 system hasn't even made it clear what's broken about the current system — much less how the new system is going to fix it.

Yet to both proponents and opponents of SPOCOM, the stakes are clear.

"We've got livelihoods at stake. We've got lives at stake," Fagan says. "We've got to get it right. We ain't paving some streets here. We're talking about saving lives."

Schaeffer's standing in the Combined Communications Center, the building with the big antenna behind Spokane Community College. When you dial 911 in Spokane County, your calls are sent here, generally starting with one agency before being transferred to one of three others." 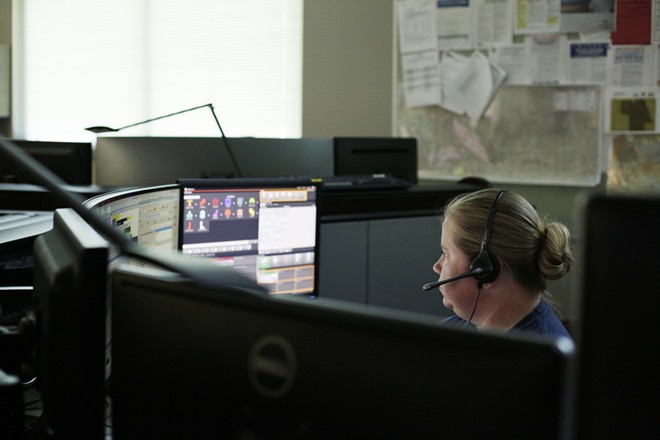 Schaeffer stands in the middle of one dispatch room, full of identical-looking monitor displays. One side's sheriff's dispatch. The other side is for police. One room, but two different union bargaining groups. Two different sets of procedures.

Schaeffer wants to tear down the walls — maybe even literally.

Schaeffer notes a number of problems with the status quo. Some incidents require frequent communication between police dispatch and fire dispatch — a task Schaeffer says is made all the more complicated when they're run by two different agencies. Despite being in the same building, the two dispatch groups generally have to dial seven-digit numbers, Schaeffer says, each time they want to communicate with each other.

Two years after the county's new computer-aided dispatch system for law enforcement was launched, he says, it still can't reliably communicate with the city's fire dispatch system without glitches.

And though a recent change to procedure has cut down on the number of times a caller has had to repeat the address of their location, he's concerned there's still too much redundancy. He's not the only one worried.

"If you've ever called 911 it can be frustrating to continually be asked the same question multiple times when you're having an emergency," says Bryan Collins, Spokane Valley Fire chief.

From Spokane Police Chief Craig Meidl's view, meanwhile, the quality and speed of the police dispatchers are stellar — there are just not enough of them. That means, at times, there's no one available at dispatch to run, say, credit card numbers to check if they're stolen.

Neither Schaeffer nor Meidl have a utopian vision of the SPOCOM proposal.

"It will likely not save money," Schaeffer says. "If it does save money it won't be a lot of money."

Still the SPOCOM model, eventually, might cross-train dispatch employees in multiple areas, giving the combined agency — in theory — a lot more agility. Someday, a police dispatcher could fill in for a fire dispatcher if they're understaffed or overwhelmed. In some circumstances, the 911 call receiver who first answers the phone could dispatch directly or guide the caller through the initial response of an emergency.

What if, Schaeffer suggests, the 911 call receivers were able to instruct callers about how to do CPR or other lifesaving interventions?

"The majority of Washington is all integrated," Schaeffer says. "We're still siloed. There's still a bureaucracy for every single organization in this building."

"The integrated model is busted," says Randy Marler, president of Spokane's fire department union, pointing to the New York City's failed experiment with a combined dispatch system. "Our current model is the perfect blend and there is no functional reason to change."

A proposal that threatened to yank employees out of their current bargaining unit was always likely to be controversial with the unions. But when a member of a city union discovered a draft document on a shared server — suggesting that employees would have "an opportunity to apply for a position with the new entity" — it inflamed concerns even more.

Today, fire and police leaders say, that document is obsolete. The new plan would transfer employees to the new organizations, not force them to reapply. Nobody is going to have their pay or benefits cut. If they like their current role, they can keep their current role.

But union members like fire dispatcher Kelly Masjoan say that their bigger concern is whether SPOCOM will actually be an improvement. So far, Masjoan says, the dispatchers themselves — haven't really been asked what they think.

"We just would like to be the people in the trenches saying, 'Here is what the job entails,'" says Masjoan. "We're concerned that maybe we're not going to decrease response times. We might increase them."

Masjoan stresses just how much expertise is required to be an effective fire dispatcher — years of experience and training — and worries that a push toward cross-training will simply dilute those tightly honed skills.

Both Meidl and Schaeffer issue a promise: If they're not convinced that SPOCOM will be an improvement over the current system, they won't support it.

For example, Meidl wants to make sure that SPOCOM is just as responsive to the concerns of the Spokane Police Department as the current system. He still has a lot of questions to get answered.

As soon as the executive director for SPOCOM is hired, the hope is, then the nitty-gritty details over the labor negotiations can get started.

Stuart Consulting Group looked at 175 different emergency communications centers across the country, and determined that the integrated systems were dramatically "more effective, efficient, affordable." There was less employee turnover. Training was more intensive. The costs of running the centers grew more slowly.

Collins, the Spokane Valley Fire chief, points to the slew of other municipalities in Washington state that have gone to an integrated system, in particularly praising the system in Vancouver.

But Judson McCauley, president of the Firefighters Union in Vancouver, isn't exactly glowing about the Clark Regional Emergency Services Agency. At times, certain important channels go unmonitored because of low staffing. Sometimes calls are missing information or take far too long to wind their way through the dispatch system.

"If there are significant issues, it's hard to transmit it up the chain and make the third-party agency make the change," McCauley says.

"It is so incredibly easy to look at efforts that weren't successful and say every effort is not going to be successful," French says. "If you don't try, then shame on you for not trying."

THE GENESIS OF AN EXODUS?

Lt. Vicki Brown, a Spokane fire communications supervisor, has seen apprehension like this before. She was there back in 1998, when the string of local Spokane County fire dispatch agencies officially consolidated into a single organization. Indeed, the transition was messy — with union challenges, personality clashes and a steep technological learning curve. But it was worth it.

"Having all the fire comms in one center, all of us in the same room, is astronomically better than the old system," Brown says.

But that doesn't mean she's convinced this new proposal will work out. If it looks like it's going to be a horror story, she's not going to stick around. And some of her other colleagues are ready to leave no matter what SPOCOM looks like.

"The older dispatchers — I know a couple of them that will not go across," Brown says.

That's exactly what Schaeffer and Meidl are worried about. They don't want talented veterans resigning.

"Experience is radically important. We don't want to lose any of that experience with the new organization. That is a true fear of mine," Schaeffer says. "That's a clear and present threat." ♦

The original print version of this article was headlined "One Call, that's All"

Have nearly eight years of Condon and Stuckart made Spokane safer?