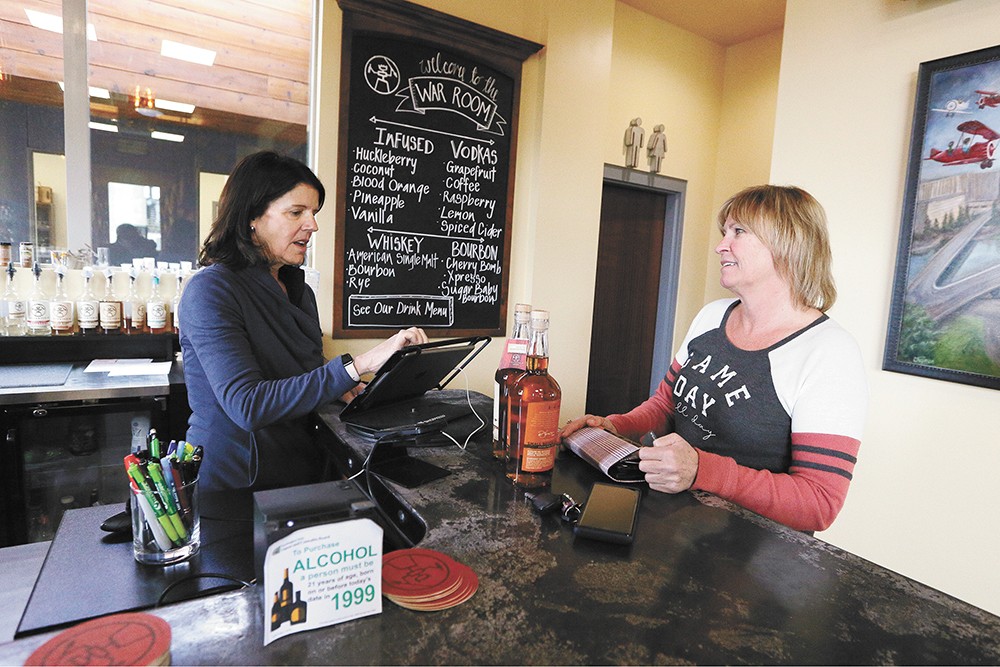 That shuttering has, of course, impacted business. Rich Clemson, co-owner of Warrior Liquor Distillery, says the closure of their east Spokane tasting room has resulted in an estimated 50 percent reduction in sales. He says 400-600 customers came through the tasting room per month, with folks stopping in for tastings before taking home a bottle or ordering cocktails.

Clemson says he considered those customers, many of them regulars, to be a focus group of sorts, providing him with feedback on some of the new products that were ready to be introduced to the market. Those products are now on hold.

"Everything was in an upward trajectory," Clemson says, "but that all got wiped off the face of the earth. I find myself saying the old phrase, 'it is what it is.'"

Don Poffenroth, the president of Dry Fly Distilling, says that there may have been a dip in his in-person sales, but that alternate avenues of sales have nearly made up for it.

"People being shut in has increased consumption," he says. "Our retail business doesn't exist anymore, but online sales have increased to cover for that loss. Sales from outside the region have slowed down considerably, but Dry Fly's sales figures in and around Spokane have actually gone up.

"But we're starting to see trickling of non-Northwest business coming back," Poffenroth adds. "There seems to be a move in this last week of people seeing the light at the end of the tunnel."

Over at Warrior, Clemson says he has lost a couple employees for the time being, as they weren't totally comfortable working in an environment that required human interaction, however limited. But he's hopeful that they'll be back soon, as will customers in his tasting room.

"We're starting to be cautiously optimistic," Clemson says. "I think the worst is behind us. I'm an optimist by nature, there'll be a different tomorrow. There are some days that are slow, and some that are busy."

Before the statewide closures, Dry Fly was already in the process of opening a new location in the downtown Spokane building where the Spokesman-Review once printed its papers. There has since been a delay in moving out the old press equipment, Poffenroth says, but the upcoming tasting room and distillery is still a go.

Distilleries are relying on bottle sales now more than ever, and although local tasting rooms aren't open, they are still providing bottle-to-go sales, and you can also arrange to have someone bring your orders to your car. Warrior's tasting room, at 714 N. Lee St., is open every weekday from 8 am to 4 pm. Dry Fly, 1003 E. Trent Ave., is open Monday through Saturday from 8 am to 5 pm. Savage Boar Spirits, 11902 W. 21st Ave. in Airway Heights, has an easy online order function; savageboarspirits.square.site to choose your spirits and arrange for a pickup. Up North Distillery, 846 N. Boulder Ct., in Post Falls is open Wednesday through Sunday, and they're currently offering bottles of their pre-mixed cocktails — margaritas, whiskey sours, bloody marys and even gift packages just in time for Mother's Day. Go to: store.upnorthdistillery.com for all the options.

"If everything worked out perfectly, we'd be [open] by the end of the year, but 'perfect' doesn't happen in construction," he says. Now they're aiming to open by early 2021: "We had a month or two setback in that scenario, but it allowed us to dial in on engineering details and get the design perfected."

Both distilleries have also been producing batches of hand sanitizer; right before he hopped on the phone with the Inlander, Poffenroth was handing out sanitizer products to a truck full of firefighters. Clemson also says they've been working with local restaurants to provide sealed bottles of liquor that those businesses can then sell with cocktail kits as a way of bringing in revenue while their doors are closed.

"This community has been incredibly grateful, from groups that have fundraised for us to the average consumer who picks up product and makes a $2 or $3 donation," Poffenroth says.

"On the other side of this, people are going to appreciate the community more," Clemson says. "I hear that refrain from a lot of our folks — they're going to want to support what we have." ♦

The original print version of this article was headlined "Lifting Spirits"