What stands between your shopping cart and local farmers 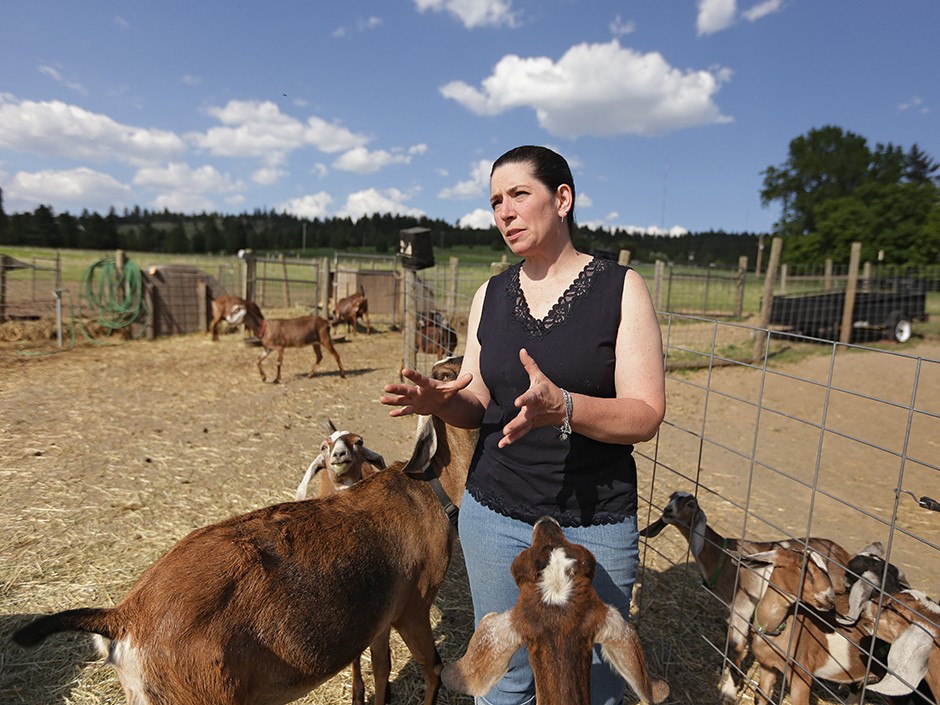 Young Kwak
Lorie Arnold at Heron Pond Farms: \"You\'re not going to get anything more local than right here.\"

It only takes two words. Lorie Arnold kneels down on the dusty ground and yells, in the same sugary inflection people use to talk to puppies: “Baby girls!”

A passel of young Nubian goats rush out the barn door, poking their noses through the fence so they’re face to face with Arnold, touching their noses to hers. At the same time, five older goats push their way up alongside her, nuzzling her cheek, their floppy ears brushing her shoulders. With her brown hair pulled backed into a tight ponytail, Arnold rattles off each goat’s name (this year’s kids have a fairy tale theme; last year it was ’50s and ’60s sitcoms). She knows how old each one is and what its personality is like. She bottle-fed most of them the night they were born and counts on them for milk every summer afternoon.

Arnold, owner of Heron Pond Farms near Tower Mountain in Spokane, sells goat cheese at Main Market, Rocket Market and Saunders Cheese Market and to restaurants like Casper Fry and South Perry Pizza, as well as some heritage pork.

The operation is vibrant and increasingly successful — with more goats each year, she hopes to sell at Huckleberry’s soon — but most grocery shoppers in Spokane won’t drop Arnold’s products into their baskets. She’s not able to catch the eye or meet the huge demand of big grocery stores.

“You’re not going to get anything more local than right here. I am still very small,” Arnold says. “Big corporate stores work with big corporate people.”

Only about 2 percent of the food people in the Spokane region buy is grown in the area, according to Natalie Tauzin, a healthy communities specialist at the Spokane Regional Health District. That’s despite the county being home to about 2,500 farms selling products with a market value of more than $117 million, according to the 2007 Census of Agriculture, the most recent data available.

It’s a seemingly backwards system that’s been developing here and across the country as agriculture has become more industrialized and centralized. Regions have specialized in and focused on certain types of production instead of diversifying what they grow and sell. That’s left areas across the country, including Eastern Washington, with growers who export their goods for processing and production before they’re seen by grocery store shoppers.

Now, Tauzin and others hope they can start to change the system at the local level. A new regional food council is in the works to identify barriers to sourcing local food and solicit a study of the region’s food economy — hard data they could use to make the case for new processing plants or legislation to help small farmers — with the goal of getting local food consumption up to 10 percent of the total by 2020.

Ken Meter runs a Minneapolis-based research company that studies regional food systems, mixing business, economic and social analysis. He says he’s done 95 studies in 32 states trying to give people looking to improve access to local food “the power to explain what’s happening” in their regions. He hasn’t analyzed the Spokane region, but says he believes its results would be similar to a study he did of an area of north-central Montana called the Golden Triangle. There, wheat makes up a major part of local agriculture and farmers lose about $64 million a year in production costs — a loss his analysis found could be lessened with more local food distribution instead of exports.

Spokane City Council President Ben Stuckart, one of the food council leaders, says the group plans to commission one of Meter’s studies on Spokane’s food economy. Such studies cost between $10,000 and $30,000, Stuckart says, and the group is in talks with other food-conscious organizations that could be potential donors.

But it won’t be as easy as just attracting a vegetable processing plant or slaughterhouse. Other, more complex problems stand between farmers and shoppers, from the cost of farmland to federal subsidies that make corn-syrup-laden processed foods so cheap to the multimillion-dollar insurance policies many food distribution companies require of even the smallest farmers.

Risks plague both ends of the process, the farmers and the buyers, says Pat Munts, who helps farmers improve their production and market their crops at the WSU Spokane County Extension and the Spokane Conservation District. Stores have to be willing to take a risk on small farmers, and farmers have to know the store’s demand will be enough to justify increased insurance or new tools needed to increase production.

“We have a core of people here in town who go out and look for locally grown food,” Munts says. “We need to take that from activists to get the mainline grocery buyer to be willing to step out and explore a little bit.”

Tauzin ticks off the same barriers, adding that it can be difficult to convince buyers that local matters. Shoppers are used to seeing tomatoes year-round, sometimes for less than $1 a pound, she says, but for a small farmer investing months and money into growing tomatoes to support his or her family, $1 isn’t enough.

While the Health District’s primary focus is on getting people to eat healthy food — no matter where it comes from — she also sees increased local agriculture as a chance to create better jobs, which could give more people the money to buy higher quality or local food.

The efforts to open the food market to more local growers could extend into Spokane’s backyards. With the help of 50 people who signed up at a regional food conference last month, Stuckart plans to craft an urban farming ordinance by the end of the year.

As it stands, Spokane city residents can have up to four animals and aren’t allowed to sell what they grow on residential land. Stuckart wants to allow more animals, hoofed animals like goats and sale of homegrown food. Similar efforts focused mostly on which animals are allowed in residential areas have gained traction (and some backlash over noise concerns) in Missoula, Coeur d’Alene and Wenatchee.

Councilman Mike Allen says he found himself up against the law last year when he wanted to have chickens along with his dog and cat.

“Economic development happens on a lot of different levels,” Allen says. “One of the base ones is that people who want to make a living growing food or making crafts shouldn’t necessarily have to live in the country. They should, if they have the space, be able to do that in the city.”

Munts says urban changes would help many of the people she sees in her farming and gardening classes who want to start on a very small scale before investing in something bigger. Meter says such operations could be the future of farming.

“Urban agriculture will be essential,” Meter says. “I think in the future as oil prices get more expensive, we may not eat certain foods unless they’re in walking distance from our house.”