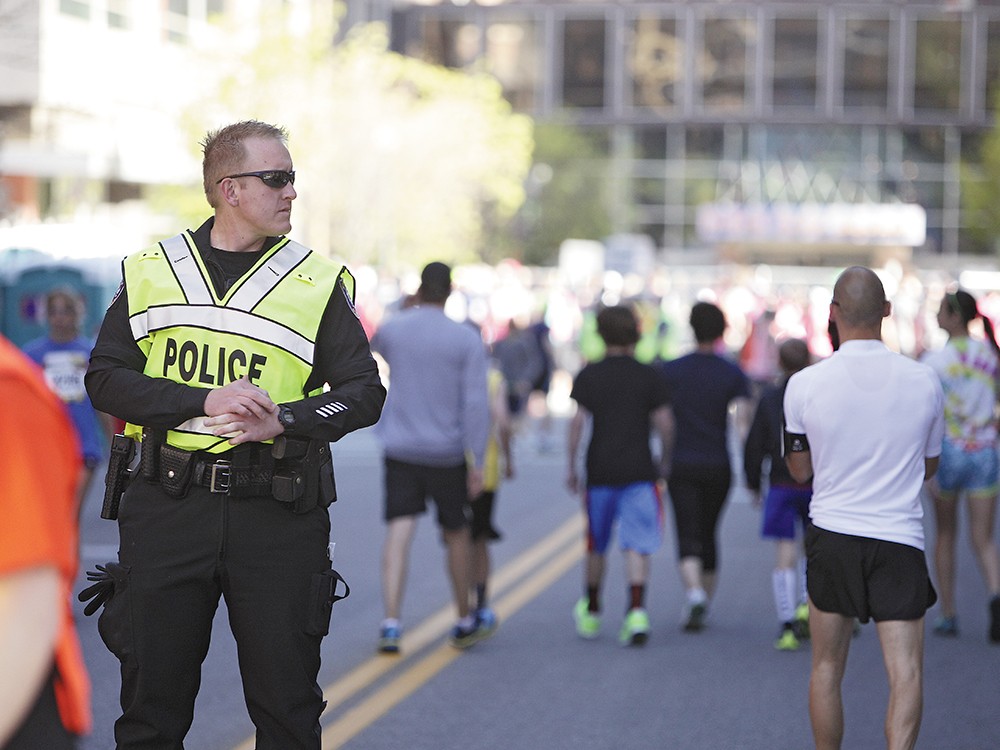 A dispatch supervisor for the Sheriff’s Office has made more than $22,000 in overtime alone during the first six months of 2013. A Spokane Police detective has similarly clocked nearly $18,000 in overtime.

Police Chief Frank Straub says recession belt-tightening steadily drove down staff levels, leaving numerous vacancies unfilled and digging a “hole” that local departments have only started to dig out of.

“The numbers have gotten down too low,” he says. “[But] we’re not going to jeopardize the safety of our officers by understaffing the shifts.”

Without funding in recent years to replace retirements or other openings, Straub and Sheriff Ozzie Knezovich say they have had to cover existing shifts with fewer officers, stretching their people thin and driving up overtime hours.

Both departments now resort to paying overtime rates of time and a half for shifts they once staffed with regular duty officers. Knezovich expects his overtime costs could run more than $500,000 over budget this year. City records show the Spokane Police on a similar trend to run about a half million dollars over budget in overtime.

And with officers picking up more and more shifts, both departments also voiced concerns about employees getting tired or burning out.

“Staffing is a huge issue for us right now,” Knezovich says. “We have no cushion left.”

Straub says several factors have contributed to extra overtime costs this year. While many officers have been called in to backfill vacant shifts, his new efforts to target crime “hot spots” have also increased demands on patrol officers and specialty units.

Beyond that, Straub says the department also spent more on overtime to strengthen public event security in the wake of the Boston Marathon bombing.

“That heightened everybody’s concerns around big event security,” he says. “That was a big driver.”

Department records show overtime costs to cover this year’s Bloomsday almost doubled compared to 2012, increasing from approximately $29,000 last year to $57,000 this past May. Hoopfest overtime expenses also increased about $13,000 over last year.

“We’re always behind in staffing,” he says.

Meanwhile, many police and sheriff’s employees have banked thousands of dollars in overtime payments. At the Spokane Police Department, Det. John Willard has picked up enough extra shifts to make more than $19,000 in overtime for the first six months of 2013.

The Sheriff’s Office has several employees making $15,000 to $20,000 in overtime for the first half of 2013. The top earner is Sgt. Mike Kittilstved, who has banked more than $22,800 working overtime with the regional Gang Enforcement Team.

“They work a ton of overtime,” the sheriff says.

Law enforcement agencies typically operate with high overtime rates. Patrol duties and shifts cannot go unfilled if a high-profile case eats up manpower or an injury benches an officer. Citizens still expect someone to respond when they call 911.

“We’re pretty much at the point now where we’re spending more on overtime than we should be had we been appropriately staffed,” he responded.

Other regional departments have spent significantly less money on overtime this year. In Idaho, the Coeur d’Alene Police Department spent just $135,000 for overtime during the first six months of 2013. The top overtime earner, Officer Jared Reneau, made $7,700 during that time. Most Coeur d’Alene officers made $2,000 to $5,000 in overtime.

The Kootenai County Sheriff’s Office, which warned of understaffing and increased overtime in its 2013 budget proposal, spent more than $313,000 on overtime.

Much of the Kootenai County overtime goes to jail staff with Deputy Wade Kiedrowski collecting the most at $11,800 for the first half of 2013. Average overtime for the department’s 58 patrol deputies during that same period was about $1,218.

Gavin Cooley, Spokane’s chief financial officer, acknowledges the Spokane Police Department will be significantly over budget by year end, but he believes some additional tax revenue and in-house savings will cover the expenses.

“We’ve known we were going to have this overtime,” Cooley says. “[Straub] has been very clear that he’s going to do whatever it takes to create a safe community. That’s what he’s been charged with.”

Both the Spokane Police Department and the Sheriff’s Office hope some relief is on the way. City budget priorities announced Tuesday ask for funding for an additional 25 SPD officers. County commissioners also recently approved five deputy positions to fill a few of the vacancies at the Sheriff’s Office.

Entry-level commissioned officers often take at least 18 months to get trained and put on the street. Straub says he has made seven recent hires to fill previous openings. Knezovich says he has two new deputies going through training.

For the time being, both departments will continue to rely on overtime to fill shifts. Straub says his overtime numbers should level off now that most of the city’s special events have finished for the year. Just Pig Out in the Park remains.

Straub and Knezovich say they plan to closely monitor how their employees pick up overtime shifts to prevent overworking or overtime abuse. They say they try to make sure employees do not stack up shifts or let work hours overwhelm their home lives.

“We’re watching it really closely,” Straub says. “It’s something that we have to pay attention to.”

Knezovich says he knows his employees could be stretched thin, and he works to prevent overtime from having negative impacts on job performance or family.

“You can only work so much overtime before you start burning out,” he says. “It takes a toll.”