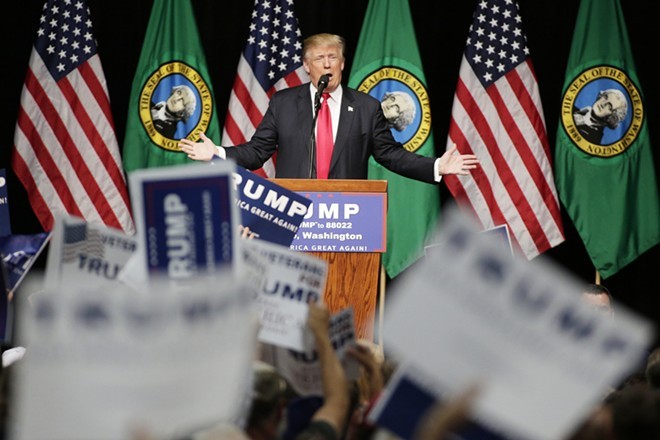 Young Kwak photo
Trump spent plenty of time praising police in his big rallies, but won't pay the Spokane Police Department back what his rally cost the department
$100,000 is enough to pay the base salaries for two entry-level police officers. But last year, the Spokane Police Department spent more than that in overtime costs to help provide security for three presidential campaigns that held rallies in Spokane.

In June, The Spokesman-Review reported that the Spokane Police Department billed all three candidates who held major rallies in Spokane, asking for reimbursement.

But, ultimately the Clinton, Sanders and Trump campaigns didn't pay back a dime. Spokane Police Department Spokeswoman Michele Anderson says, as far as the police department knows, none of the campaigns even responded.


Police departments across the country tell similar stories. Dave Levinthal, for the Center for Public Integrity, contacted numerous municipalities that attempted desperately to get the presidential candidates to reimburse them for their costs.


"They sent invoices, they sent bills, they called, they followed up," Levinthal says in an interview with The Inlander. "I don’t think Spokane is unique."
As rallies and protests turned to violence, the cost for security was particularly steep.

"The bottom line is that in a number of different cities, the candidates will sweep in a couple days prior to an event they scheduled at the very last minute," Levinthal says. "Obviously, you’re talking about a massive, massive police and local law enforcement force.

The Secret Service will develop a plan to secure an event, and rely on local law enforcement to carry that plan out.
It's a point then-Director of Law Enforcement Jim McDevitt attempted to drive home in his letter requesting reimbursement:

"With respect to your recent visit, you must know that such campaign costs necessitate and increased law enforcement presence, both for public safety and candidate safety as well," McDevitt wrote. "In a mid-size city such as Spokane, with a law enforcement cadre that is already deluged with normal day-to-day law enforcement duties, the overtime costs associated with such short-notice events, such as campaign visits, cause our overtime budget to skyrocket." The Spokane Police Department has often received pressure from the city administration to try to control police overtime costs. In 2015, an explosive meeting about overtime costs triggered a police spokeswoman to request a transfer, a move that, once all the dominos had fallen, created the biggest city scandal in the past five years.

It's not like the campaigns don't have the largess to pay the bill: Trump has $7.6 million left in his campaign coffers, Levinthal reports; Clinton has $838,000, and Sanders has $4.71 million.
Similarly, sometimes campaigns do reimburse the cities. Clinton paid an $8,500 bill for an early November rally in Philidelphia with Katy Perry, Levinthal notes, and the Ted Cruz campaign paid $1,200 to Green Bay, Wisconsin, and the Sanders campaign paid the city $11,472.
Even the Trump campaign, Levinthal writes, paid Green Bay a $1,403 police bill for hotel security on March 29 and a $9,550 for an event Oct. 17. But it refused to pay a $9,380 security bill from the same city — a decision he says left Green Bay officials flummoxed.

"[The Trump campaign] paid some of the bills and didn’t pay some others," Levinthal says. "It didn’t have any rhyme and reason."
Unlike Trump or Clinton, the Sanders campaign's federal filings do cite nearly $450,000 owed to Spokane and other municipalities for security costs.

"Ultimately, nobody wants to take responsibility for these costs,"  Levinthal says.

Some municipalities, however, don't expect anything in return.

"[They say] 'We’re the police, doesn’t matter if [there's a visit by] a presidential candidate or a movie star. We’re going to do our job. We’re going to do our finest to secure our event," Levinthal says. "They see that as just a core function of what they do, and they don’t expect any additional payment for it."

Questions about a Spokane police shooting, sexism in Idaho House and morning headlines

Def Leppard, Poison, Tesla coming back to Spokane this summer