He's back: Bernie Sanders is heading to Spokane again for a rally this Thursday 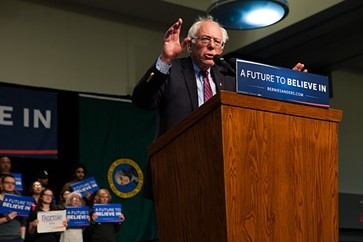 Kristen Black
Sanders spoke to a Spokane audience this past Sunday, March 20.

After nearly 10,000 people lined up outside the Spokane Convention Center this past Sunday to see presidential candidate Bernie Sanders, forming a line more than a mile long that wove through Riverfront Park, the self-proclaimed Democratic Socialist senator from Vermont is heading back to the Lilac City tomorrow. Yes, you read that right — Bernie is coming back to Spokane to see his adoring supporters this Thursday, March 24.

Clearly he's hoping to gain some last-minute support from Evergreen State voters before our primary caucus this Saturday. Some predictions are that Washington voters will favor Sanders over Hillary Clinton. Before his first Spokane stop, Sanders drew 17,300 people to a Seattle rally. He'll be back in Seattle this Friday, too, for a stop at Safeco Field.

Just today it was announced that Sanders has won the support of Idaho's 23 delegates. He still trails Hillary Clinton, who has 1,217 delegates compared to his 915.

To have a chance at seeing Bernie in person during tomorrow's rally, head to this link. Doors open at 9 am at the Spokane Arena, with the rally to kick off several hours later (some outlets are reporting at 2 pm). As with the Sunday event, bags are not allowed and attendees are asked to only bring necessary personal items like their keys and phone. Admission is on a first-come, first served basis and tickets are not required, but you can RSVP on Sanders' website if you'd like.

Happy Hour of the Week: The Blackbird’s drinks and appetizers sing sweetly