Kristen Black
He was in Spokane.

Larry David impersonator, Vermont senator and self-described democratic socialist Bernie Sanders made a whirlwind visit across Washington state yesterday as part of his political revolution/campaign for the Democratic nomination for president. After making earlier stops in Vancouver and Seattle, Sanders made an appearance at the Spokane Convention Center, where, according to official accounts, he drew 9,820 people.

Sanders currently trails former Secretary of State Hillary Clinton in the delegate count. But he’s making a play for Washington’s 118 delegates and Idaho’s 23. Both states hold their Democratic caucuses this week. and Sanders, who has done well in demographically similar states, is hoping to bolster his delegate count.

Kristen Black
The crowd lined up early in the evening, and a line stretched deep into Riverfront Park, people hoping to cheer on Sanders. While people waited, pro-life activists harangued the line through a megaphone and graphic pictures of abortions.

Inside the main room (overflow rooms were set up in the building) the crowd was mostly younger millennials, a demographic that Sanders has done well with. Some wore dreadlocks. Some wore political t-shirts and took selfies to a rotating playlist that included “America” by Simon and Garfunkel, Willie Nelson’s “On the Road Again,” “Power to the People” by John Lennon and “Burn Baby Burn” by the Trammps.

According to Eichstaedt, Sanders told those gathered that he would undo a recent act by Congress that lifted the country's ban on oil exports (which could increase the number of volatile oil trains passing through Spokane), and that he supports incorporating environmental concerns into a renegotiated treaty with Canada over the Columbia River.

“He’d also support a ban on all fossil fuel extraction on public lands,” said Eichstaedt of his conversation with Sanders.

“I am a supporter of this political revolution,” said Pakootas (who earlier told the Inlander that he hadn’t formally endorsed Sanders). “I support Bernie Sanders' positions. We have been ignored and neglected by our leaders in Washington for too long. You see, I know what it’s like to be ignored and neglected by my government. I grew up on the Colville Indian reservation.” 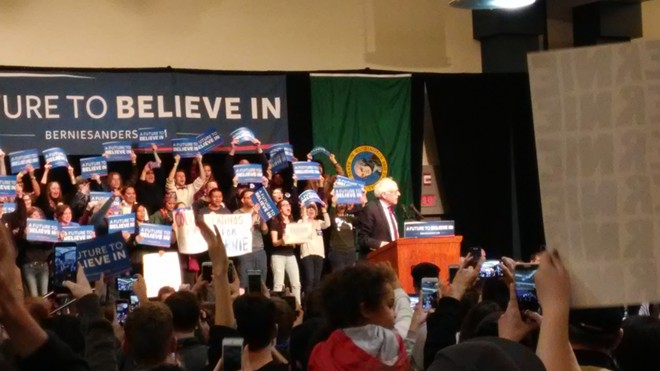 Jake Thomas
Bernie Sanders at the Spokane Convention Center
After 9 pm, Sanders, who had a hoarse voice, took the stage. Here’s what got the biggest applause:

On Republican frontrunner Donald Trump
Sanders mentioned a poll that found him ahead of Trump in Utah, one of the country’s most conservative states.

“The reason I think that Donald Trump is not going to become president...is because the American people will not elect a candidate who lies all of the time,” said Sanders.

On the birther movement
"You know, it's a funny thing, President Obama’s father was born in Kenya. My father was born in Poland. Nobody has ever asked me for my birth certificate. It might have something to do with the color of my skin."

On democracy and oligarchy
"What democracy is not about is billionaires buying elections. When you have the Koch brothers and a handful of billionaires willing to spend $900 million in this election cycle to elect candidates who represent the wealthy and powerful, that is not democracy, that is oligarchy. Together we are not going to allow this country to become an oligarchic society.”

On Republican-led efforts to make it harder to vote
“I say to the cowardly Republican governor, you do not have the courage to engage in a free and fair election. Get out of politics; get another job!”

On Wal-Mart workers having to go on food stamps or other government assistance
"That is what rigged economy is about, so I say to the Walton family [which founded Wal-Mart], the wealthiest family in America, get off of welfare pay, your workers [enough]."

On Hillary Clinton’s giving a paid speech to Goldman Sachs
"[F]or some strange reason that I can't figure out, I've never been invited to speak to Wall Street for $225,000."

"I think, to tell you the truth, that if someone gives a speech for $225,000, it must be an extraordinarily brilliant speech. It must be a speech that can transform humanity. It must be delivered in Shakespearean prose. I think a speech that great should be released to the American people"

On Native Americans
“Native Americans have been cheated, they've been lied to, treaties they've agreed to have been broken, and today in many Native American communities all over this country we are seeing incredible levels of unemployment, alcoholism, suicide, inferior health care. We owe an enormous debt of gratitude to the first Americans. We have learned so much from their culture and way of life.”

On universal healthcare
“So let me repeat to you what I have believed for my entire adult life, and I've been criticized for saying this, so let me say this again and that is I believe, that healthcare is a right of all people."

Bernie, Bill, March Madness and other stories you need to know