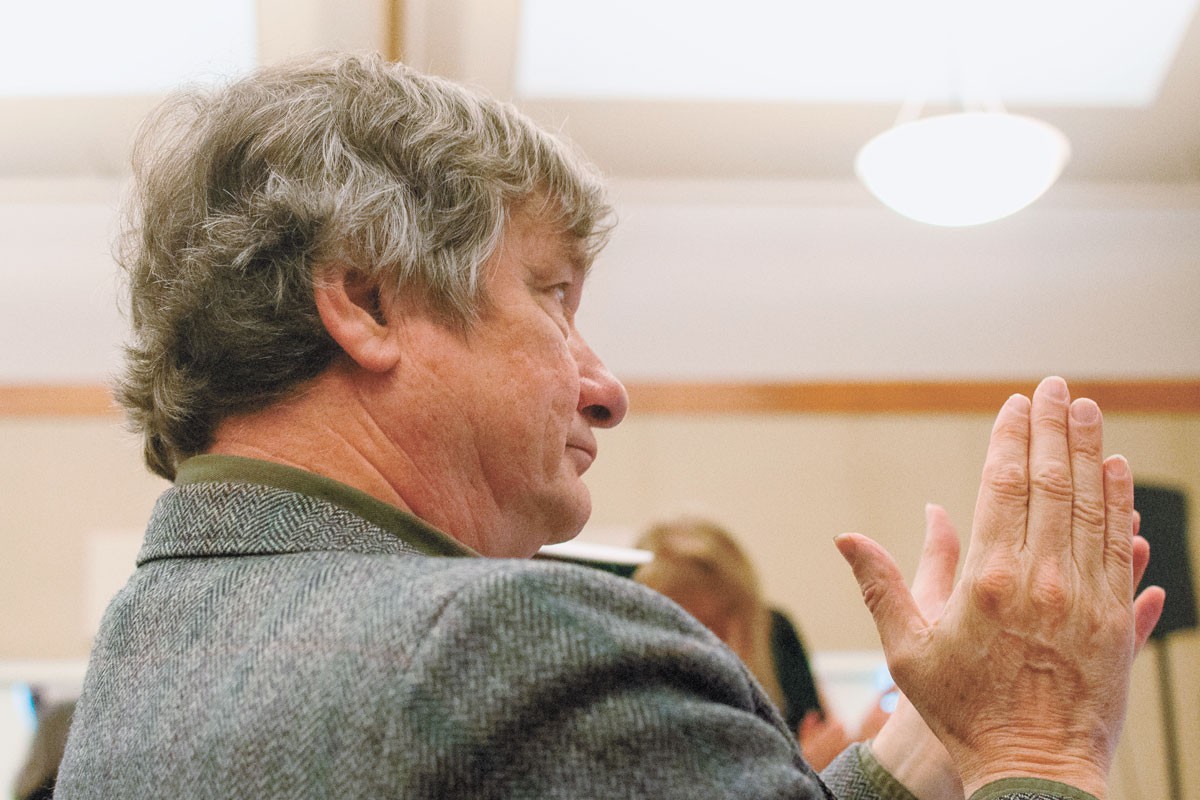 Daniel Walters photo
Rob Chase is described, even by Democrats, as an affable guy. But his flirtation with a variety of conspiracies has raised more pointed concerns.

As Spokane Valley Rep. Matt Shea leaves the Washington Legislature, the 4th District is losing a Republican conspiracy theorist who once speculated with radio host Alex Jones that President Obama's FEMA shelters were actually being built as prison camps. By the end of his run, Shea had been accused of domestic terrorism by an independent investigator and booted from the Legislature's Republican caucus.

But before choosing not to seek re-election, Shea recruited one of his longtime supporters to run in his place: former Spokane County Treasurer Rob Chase.

In his demeanor, Chase is the caustic Shea's polar opposite. He happily sits down with political opponents for conversations over coffee. He speaks readily with the press, talking to the Inlander on the phone for this story for over an hour.

"He's a very affable guy," says Andrew Biviano, the former Spokane County Democrats chair whose wife once ran against Chase for treasurer in 2014. "He likes to engage in intellectual exercises."

"He wouldn't recognize the harm inherent in some of the theories he was entertaining," Biviano says.

Chase's online writings suggest he's just as much of a conspiracy theorist as Shea.

"There is a lot at stake in this battle," Chase writes in an April 20 blog post on the far-right Inland NW Report website. "Our Republic."

The post, titled "Plannedemic?," describes Chase's take on "QAnon," the bizarre and frequently anti-Semitic conspiracy theory that predicts a showdown between Donald Trump and a horde of child-sacrificing Satanic leftists who control the world.

To Chase, the theory details the latest fight in a "battle that's been going on at least a few hundred years" with "patriots" like Trump trying to thwart "an ongoing plan by the Deep State to destroy America, because that is the only way they can establish a Global New World Order."

Or maybe it goes all the way to the top, Chase speculates.

"A few people I have talked to even suspect this is all part of an elaborate scheme so complex that even Trump and Hillary are high-fiving each other when the curtain is drawn," Chase writes. "If that is true we can only hope for Divine Intervention."

Today, experts on extremism have become increasingly alarmed by how wide the QAnon theory — which the FBI has called a domestic terrorist threat — has spread.

Lance Gurel, Chase's Democratic opponent, says that a reasonable person wouldn't use his position to promote such an idea.

"People have been killed because people believe that some people in authority say that this conspiracy is true," says Gurel.

GRAND UNIFIED CONSPIRACY THEORY
The life of the QAnon conspiracy began on 4chan, an infamous internet forum filled with trolls and racists. In 2017, an anonymous user dubbed "Q" began making cryptic posts claiming that Hillary Clinton was about to be arrested. Followers began buzzing that Trump was preparing to round up the vast global network of sex traffickers, pedophiles and Satanic cannibals that they believed controlled society.

Clinton, of course, was never arrested. But even as Q's claims were proven wildly wrong again and again, the QAnon theory remained — adapting, mutating, reproducing.

QAnon sucked so many other conspiracy theories into its orbit — cryptography, alien numerology, 9/11 trutherism, anti-vaccination activism — that "the full web of it encompasses every element of banal politics, science fiction and cult religions," says Charlie Warzel, a New York Times columnist who writes about technology and disinformation.

In the last few years, adherents of QAnon have blocked a bridge to Hoover Dam with an armored truck, murdered a mafia boss, threatened to kill Joe Biden and tore apart a homeless camp.

"QAnon unfortunately has a real potential for incitement to violence," says Reaves. In several cases, she says, QAnon supporters have kidnapped children.

But Chase says he's intrigued by QAnon, even though he doesn't quite "have a handle on what it is."

"A lot of what they say is really interesting," he says. "The cryptic information and all that. I'm open to it."

While he doesn't consider himself an outright QAnon supporter, the ideas slotted neatly into Chase's long-running world view that sinister, centralized forces are pulling the world's strings.

"There is a deep state — there is a shadow government that's been behind the scenes for, gosh, a century probably," Chase says. In his conversation with the Inlander, he references theories about Freemasons and the Vatican, about Hillary Clinton, John McCain and the JFK assassination.

Ultimately, he says he's not quite sure who really controls the world.

In fact, when it comes to QAnon, he wonders if it's all actually a hoax secretly controlled by Hillary Clinton supporters, he says.

"For all I know, it's 'controlled resistance,'" Chase says.

But whatever misgiving Chase has, they haven't stopped him from repeatedly promoting the theory. On the local "Pacific Northwest for President Trump" Facebook page, he's repeatedly directed followers to check out QAnon posts or podcasts, writing in January that "Q is posting again. This will be a week to remember," and in April that "Q is all hopped up tonight."

Chase has posted "#WWG1WGA," the abbreviation for "where we go one, we go all" — a viral expression of solidarity to QAnon supporters.

Warzel, the Times columnist, says the foundation of the theory is dangerous enough that the "just asking questions" explanation doesn't cut it.

"There's no questions to ask," Warzel says. "One of the central premises of it is you need to seek the death penalty for political opponents, that these people need to be eradicated. ... It's an outrageous theory. It's dangerous at heart."

CURIOSITY WITH A Q
QAnon, of course, is hardly the first time Chase has dabbled in conspiracy theories.

"I wonder if this is true and just being ignored," he writes in a 2017 comment, posting a long-debunked faked image purported to be Obama's Kenyan birth certificate.

"I wonder if this is credible," Chase writes in a 2016 post, linking to a hoax claiming that tens of thousands of fraudulent Clinton votes were discovered in an Ohio warehouse.

In 2015, in his capacity as the county treasurer, he went as far as to call Fairchild Air Force Base to report that he saw "several chemtrails over the courthouse." The "chemtrails" conspiracy theory argues that contrails that form behind jet engines are actually chemicals being sprayed for nefarious purposes.

"They referred me to FAA," he wrote on Facebook. "The guy I spoke to chuckled and said it was just ice crystals."

But Chase — who invited a chemtrail speaker to present to the local Republican Coffee Club — says he still doesn't know what to think about the issue.

Just last year, Chase shared a link on Facebook to a "report on who carried out 9/11."

The report alleges that the Twin Towers attacks were an "inside job," involving Saudis, "the Zionists" and Vice President Dick Cheney, and that the "Boston Bombing, Sandy Hook, Orlando, San Bernardino, and Las Vegas" attacks were "false flag" hoaxes.

When a fellow Republican Facebook commenter described the report Chase shared as a "total dumpster full of shit," Chase counters by pointing to 7 World Trade Center, the building that he claims appeared to have collapsed with a "controlled demolition."

"You never hear anyone talk about, you know, in the mainstream press, Building 7," Chase tells the Inlander.

In fact, if Chase had closely followed mainstream journalism, he would have seen exhaustive reporting not just detailing how fires weakening the support columns led to the sudden collapse of the building, but also debunking QAnon and chemtrails.

But he says he hasn't really trusted the mainstream media since he ran for Congress in 2002, when they botched their reporting in the run-up to the Iraq War.

So where does he get his information from instead?

THE TRUTH IS OUT THERE 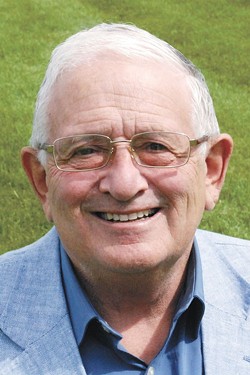 Lance Gurel, Chase's Democratic opponent
Gurel, Chase's opponent, calls the promotion of QAnon theories just one example of Chase's reckless ridiculousness. Chase's call to split Eastern Washington into its own state is another.

Sheriff Ozzie Knezovich, a longtime passionate critic of Rep. Shea, accused Chase in the Spokesman-Review at that time of not being "willing to stand up against radicalized hate" and accused him in the Inlander of "radicalized hate towards law enforcement."

But this time, Chase is running in the Spokane Valley district that overwhelmingly turned out to re-elect Shea, despite a decade of news reporting on Shea's controversies. They already chose Chase over a more moderate alternative.

In the 4th District, Chase — as the only Republican to make it through the primary — is favored to win no matter what he says or who he allies with.

In June, Chase kicked off his campaign at the home of John Charleston — a fervent promoter of QAnon on Facebook — and the former Spokane GOP Chair Cecily Wright. During the kickoff speech at the event, Chase repeatedly referred to his campaign slogan, the one emblazoned across his campaign sign: "Truth Matters."

But as he talked in one moment about how the coronavirus looked like a manmade bioweapon and in another that some people think COVID-19 is just a "psyop operation," he also appeared to acknowledge that, in plenty of cases, he didn't quite know what that truth is.

"Who do you trust?" Chase asked. "One of our problems in our country is we don't really know who to believe. There's so much out there." ♦