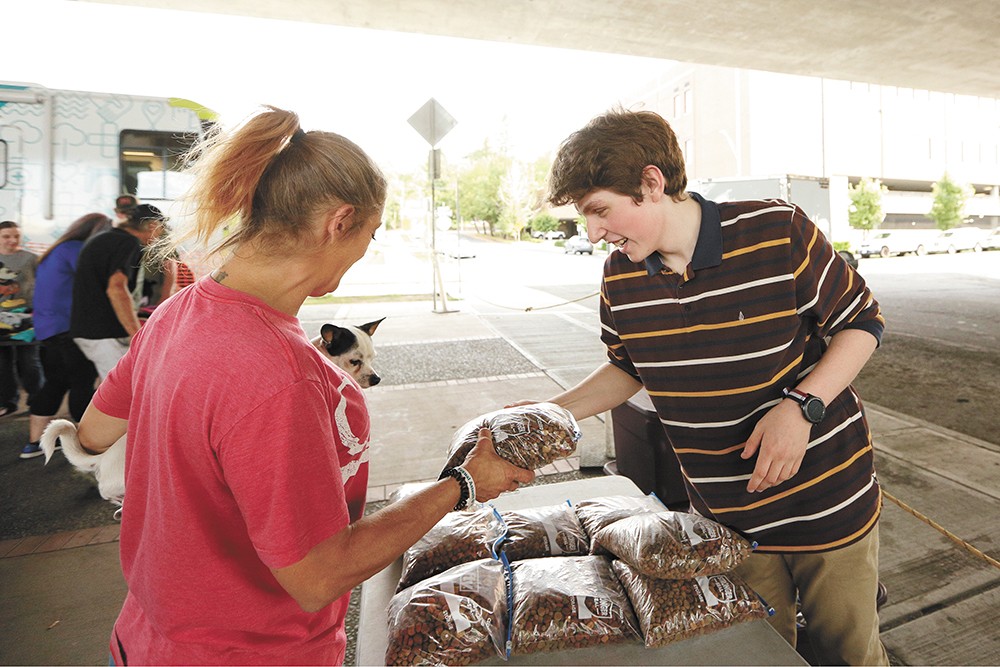 family and more, being a teenager and finding time to volunteer one's time with a nonprofit would, justifiably, be a big challenge for most. Yet ask two local teens who each spend the bulk of their free time helping others, and doing it all is a natural fit.

Avery Plank, 16, is about to start his junior year at Mt. Spokane High School. When he's not in class, working part time, practicing with his debate team or hanging out at home with his three cats and a dog, Plank is running the nonprofit he started more than four years ago while in sixth grade. Project Unconditional Love, now a state and federally registered nonprofit, helps feed the local homeless population's pets by distributing dog and cat food at several local sites.

Similarly, 13-year-old James Laker, an eighth grader at Post Falls Middle School, splits his time between school, golfing, Boy Scouts and volunteering at the Post Falls Library and with Specialized Needs Recreation, a nonprofit in Coeur d'Alene. For that program, known as SNR for short, Laker helps kids and adults with a disability or impairment enjoy activities, sports and field trips.

For both Plank and Laker, volunteering in the community is a fun and fulfilling activity.

"The feeling of knowing I'm doing something good for the community is really nice," Laker notes. "Since I started volunteering, I've gotten better at talking to more people and getting on their level so we understand each other to solve problems."

His mother, Shannon Laker, says her son's volunteer experiences have also helped him overcome his usual shyness. She also notes that James truly loves the volunteer roles he's taken on.

"He's just taking on more leadership roles, pretty much everywhere he goes," she says. "It's helped him be like 'OK, I can do this.'"

James was elected to be his school's student body president for the upcoming school year and recently completed a project required to become an Eagle Scout. Shannon says he organized a project to build raised dog beds with some of the adults at SNR that were then donated to the Panhandle Animal Shelter earlier this summer.

Every Wednesday evening, you can find Plank's Project Unconditional Love

under the Interstate 90 overpass in downtown Spokane, handing out free gallon-sized plastic bags of dog and cat food to anyone who needs it. Plank has been joining the weekly 6 pm distribution of food and supplies (at Fourth Avenue and McClellan Street) organized by local nonprofit Blessings Under the Bridge since May 2015.

Since then, Plank has collected and distributed more than 200,000 pounds of pet food and 5,000 pet coats, along with treats, collars, leashes, toys and pet waste bags. Project Unconditional Love also brings pet food and supplies to Meals on Wheels Spokane, Serve Spokane and Transitions' day shelter Women's Hearth. Each month, he estimates up to 5,000 pounds of pet food goes out to people in need.

"The demand is much greater than what we have the ability to do," Plank notes.

"He has about 50 offers from different groups that do distributions," adds his father, Matt Plank. "They would love for him to do pet food, but we don't have it."

The public can support Project Unconditional Love in a number of ways. Cash donations can be made to the nonprofit's account with Columbia Bank, and donations can be dropped off at both Spokane area Northwest Seed & Pet stores and Regal Veterinary Clinic. There's also an Amazon wishlist for supporters to purchase items to be delivered directly to the nonprofit. Project Unconditional Love also maintains a Facebook page, at facebook.com/pulspokane.

While Plank and his dad are the nonprofit's two main workers, Project Unconditional Love has also received crucial community support in the form of bagging parties, where volunteer groups get together to sort donated dog and cat food into zip-top bags for easy distribution. The nonprofit mostly gives out dry food, but Plank notes that they'll accept anything, including canned, prescription and puppy or kitten food, along with opened bags of food as long as it's not expired.

"The animals, if they are healthy and happy, they are providing stability," Matt Plank says. "It's in everyone's best interest if the pets are fed, too. A lot of them feed their pets before they feed themselves."

"The pet gives them something to work for and fight for, and people will get sober for their pet," Avery adds. ♦