You can tell a lot about a person from their domestic surroundings and even more by their workspace.

Inside Melanie Lieb's north side home, two dogs have the run of the living room, crammed with estate sale and thrift shop finds, assorted plants, remnants of Lieb's travels and past art exhibitions, as well as works by other artists. But when it comes to Lieb's studio, the excitable and uber-friendly Pekingese Pomeranians named Arthur and Rose are blocked by a baby gate.

And, oh, what a treasure trove is Lieb's studio, packed with works-in-progress from Mutation, her upcoming exhibition at Kolva-Sullivan Gallery.

On the floor are several paintings that started it all: self-portraits from images morphed via the kind of face-altering apps you often see on Facebook. To those she added 3D elements — fluff balls, spiky things, bits of paint — nudging ideas around. Or maybe the ideas nudged her.

"I'm overwhelmed right now with our universe... politics, issues, social media," she says, noting how the idea of change itself mutated, prompting the name of the show and guiding the many forms of expression she chose for what is her second solo exhibition at the Kolva-Sullivan.

The puffballs ended up as part of several large, amorphous, soft sculptures, including a star-like one several feet across with an umbilical-like cord extending from it. It sits safely behind the baby gate on the floor of her studio. Other works — all untitled — sit on small pedestals on top of her workspace, gathered like alien pods. The textures, forms and some of the colors — browns, pinks, peaches, yellow — evoke a sense of body parts: breasts, mouths, vaginas, penises, fingers and the assorted lumps and bumps of the human body witnessed from unusual angles. 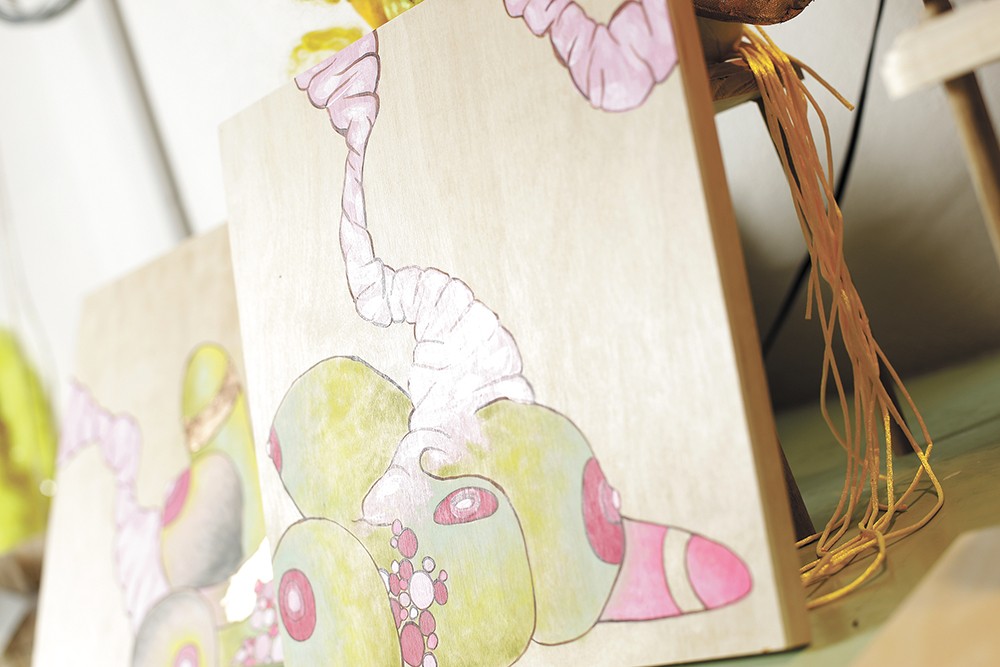 Nearby are several peachy-pink ceramic cylinders that will be mounted on the wall above the soft-form sculptures when Lieb finalizes the gallery installation. A pile of 4-6 inches wide irregular strips of fabric laying on the floor will become the "guts" emanating from the wall-mounted cylinders. Lieb is improvising, yet focused.

Stacked against a worktable are a series of monotype drypoint prints Lieb created with help from fellow Saranac Art Projects gallery member Margot Casstevens. Elsewhere: raw wood panels in various states of completion that will form the bulk of paintings in the exhibition. They, too, echo the theme of body and of change.

Lieb pulls up on her iPhone the soundtrack she created for the exhibition, which combines a heartbeat, sounds from space, Albert Einstein talking, water. Although Kolva-Sullivan is her favorite gallery — it reminds her of her native Chicago — she wanted there to exist a sense of fullness and presence in the space, especially when people aren't there.

She likes science, she explains further, and watches shows about dinosaurs, ancient works and worlds, evolution, PBS's NOVA series. Indeed, her jewelry business — she sells at festivals and online, and through Pottery Place Plus — is called Nucleus. Necklaces, earrings and other jewelry often feature sciencey elements: irregular round shapes melded together like a cluster of cells, pendants of meticulously fused glass or brightly colored enamels resembling miniature universes.

When she's not ramping up for an exhibition or making jewelry, Lieb works as a floral designer, a lifelong pursuit that she began as a young woman. And her father, a cartoonist, was an influence from the beginning. "I was born with a marker in my hand," says Lieb, who had several of her father's cartoons transformed into tattoos on her arms.

She attended but didn't graduate from the Art Institute of Chicago and the Milwaukee Institute of Art and Design, pursuing instead a self-directed course of study, mostly in painting and drawing. She worked in conservation framing, jewelry design and exhibited artwork, including at the Opposite Gallery, which she founded.

After her mother passed away when Lieb was 24, she travelled both nationally and internationally, returning to Chicago for another 10 years or so before relocating to Michigan's Upper Peninsula where she ran a flower shop and met her husband David. They moved to Hawaii and in 2014 to Spokane, where Lieb has steadily built large bodies of work.

Lieb has participated in Terrain, Bazaar, Window Dressing, Art on the Green and had exhibitions at Saranac Art Projects, Object Space, 29th Avenue Artworks, Little Dog Art Gallery and Kolva-Sullivan, where she most recently showed The Comeuppance of a Lazy Antisocial Rabbit, an all-encompassing show similar to Mutation in its variety of media and attention to detail.

For the Mutation opening, says Lieb, she's planning on serving assorted confections, some of which will be spherical and boob-like. At this Lieb smiles a little smile.

"I have a tendency to create my own universe," she says. ♦

The original print version of this article was headlined "Universal Appeal"