More Grub in the Pub

Kelly’s Irish Pub has doubled its menu. Save room for a Guinness. 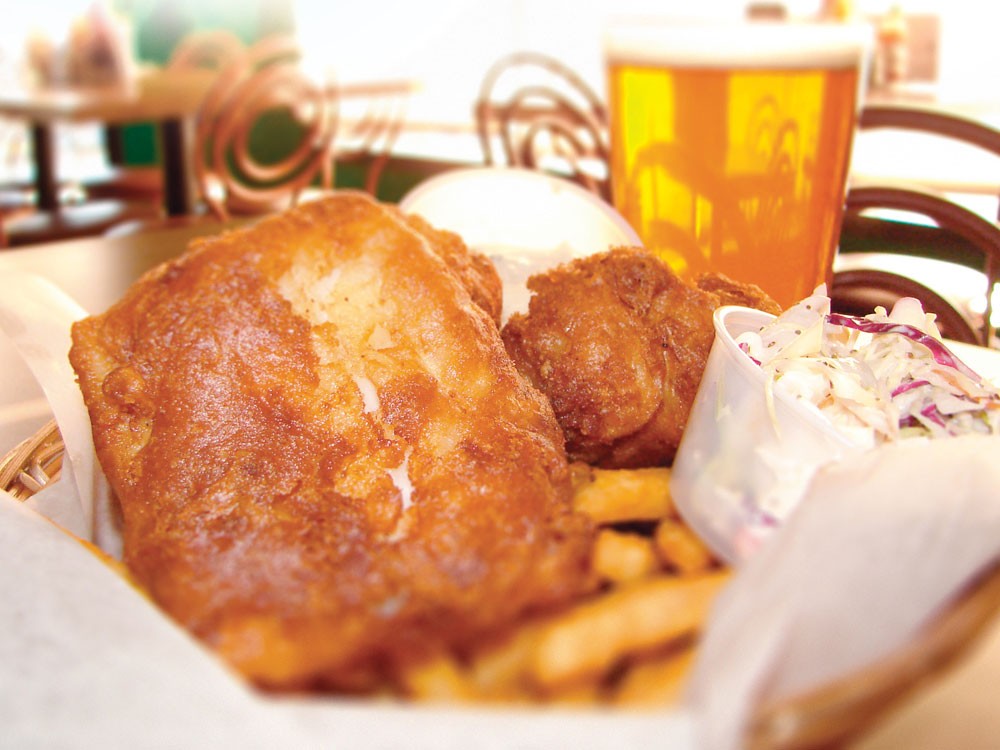 As a geologist, Chris Coscia is used to handling ancient materials and making new discoveries. Yet when the new owner of Kelly’s Irish Pub read about the availability of this five-month-old Coeur d’Alene restaurant on Craigslist, he didn’t have to dig too deep to see its potential. And since buying the place, much to his credit, he has managed a nearly seamless transition.

The least visible change is the interior of Kelly’s, with its dark green walls festooned with Irish memorabilia, although Coscia has installed several televisions — an addition which seemed to be going over well with the cadre of working men bellied up to the bar with pints in hand.

Food service, however, changed quite a bit — including new head chef Ronikae Achord, who has more than doubled the menu offerings. Under Achord’s direction, Kelly’s kept many of the foods you’d expect in a conventional Irish pub: fish and chips ($10), the Reuben sandwich ($10) and bangers and mash ($10), the latter of which we adored when the restaurant was under the management of original owner, Walter “Duke” Keith. The Reuben, in fact, is Kelly’s signature sandwich. It so impressed patron Brad Holcomb he snapped a photo of it on his phone.

“Can’t beat the price,” Holcomb said, noting he and his dining companions were working their way down the sandwich menu ($10, with fries), which also includes the Blarney (roast beef, sourdough, horseradish sauce, caramelized onions, and Swiss, American and cheddar cheese).

True to his name, Mr. Meat-and-Potatoes ordered the new Irish Meatloaf served with mashed potatoes ($9.25), which is one dish I rarely make for him in the summer. This was two thick slabs of meatloaf with tiny chunks of carrot, onion and celery, and a nice kick provided by a dollop of tangy chili sauce. The gravy was much too salty, although the grilled veggies were firm, fresh and flavorful.

Although a salad actually sounded good, a few sips of beer — Blue Moon, Mac’s, Harp Lager, Bud Light, Smithwick’s and Guinness on tap — persuaded this lapsed Catholic into having the fish and chips ($10), it being Friday and all.

Bargain-priced and beautiful to boot, this dish featured three thick cod fillets, each nearly 4 inches square and lightly battered with perfectly done, moist fish inside. The fries were reminiscent of Capone’s famed battered-fries, while the slaw was homemade with lots of poppy seed and a nice ratio of bitter-to-sweet.

Typically with fish, a slice of lemon ought to have been included or at least offered — the other option being vinegar — and yet when we mentioned that to the owner, we discovered the menu was sort of new.

How new? Two days old. Oh. And one of the chefs was unavoidably detained, so only there was only one cook, Achord, for peak dinner hour. A review two days into a new menu? The luck of the Irish (and quite a bit of planning on the part of the staff) was apparently with them, as the meal was generally good and the pricing was very reasonable.

Dessert could have been a brownie with hot fudge and vanilla ice cream ($4.75) or fried apple dumplings with vanilla ice cream ($4), the discussion of which tipped us to future plans for the space adjacent to Kelly’s. Two owners ago (when it was Grumpy’s), there were plans to put in a gelato machine; Coscia is sticking with ice cream like Blue Bunny. He plans to call the new space Kelly’s Ice Cream Shoppe.

What else is planned?

They’ll keep fine-tuning the menu, adding an actual grill for burgers (they’re currently griddled) and more beers, said Coscia, who sees Kelly’s as a neighborhood kind of eatery in an area that is becoming more known for dining.

“We want Fourth Street to be found.” Spoken like a scientist.