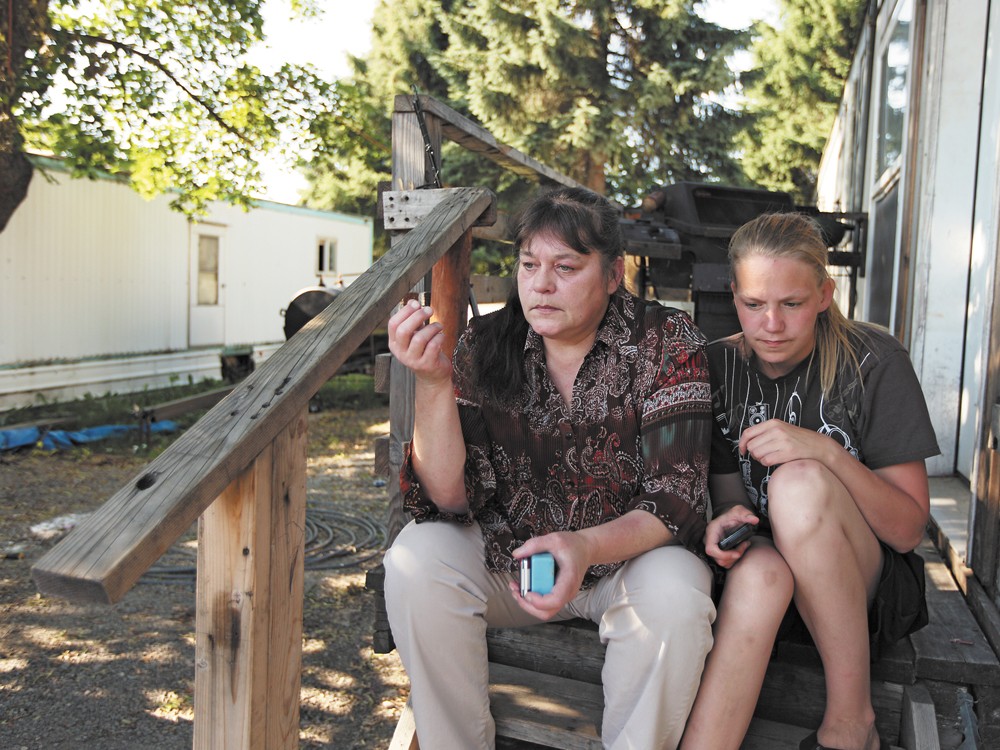 Lisa Cornett, left, and her 23-year-old daughter, Nicole, aren’t sure how much longer they’ll live in El Rancho Mobile Home Park in Post Falls, Idaho.
Sonya was the first one to go. She lived a few houses down, in No. 8. Then a family a little farther down the row went. They took their belongings and left their homes, some in the middle of the night. Soon, it got closer. Both houses next door were empty.

Lisa Cornett, 53, lights a cigarette in her crowded single-wide as she counts on her fingers all the people she knows who’ve left the neighborhood. Her bangs part in the middle over her tired eyes.

Cornett lives in the El Rancho Mobile Home Park in Post Falls, where only about 20 of 75 lots are still inhabited. The residents here, who own their homes but rent spaces in the park, received eviction notices in late January, giving them six months to get out. Some of them moved their homes out. Others couldn’t afford the cost and just left them.

Cornett lives with her son, daughter-in-law, daughter and two granddaughters and supports them all on her wages as a department manager at the Super One two miles up the road. Her kids are looking for jobs, she says, but the economy is tough. For right now, she’s all they’ve got, and she has no idea how she’ll afford to move them all somewhere new.

It’s an unusual plight — to own a home but not the land it sits on, to be responsible for upkeep but at the mercy of a landlord — and Cornett says it’s one most people don’t understand.

“Just because we live in trailers doesn’t mean we’re trailer trash,” she says. “Don’t treat us like trash.”

But the lot owners say they’re doing the community a favor.

“This thing is so dilapidated and old. It needs to go away,” says Rod Plese, one of five owners of the land. “We aren’t the enemy.”

A group of seven developers and real estate investors bought the property in 2007, but the economy tanked before they could develop it. So last year, the group split their assets and five investors, including Plese, took control of the park. The owners — the newly formed Foolish Five, LLC — went to the property last fall for the first time since 2007 to “see what we had.” They found 17 empty lots, nine abandoned homes and a few that had been gutted, as well as gravel roads with massive potholes and outdated water and sewage systems.

“How do you allow three people to stay on a multimillion-dollar piece of dirt?” Plese says of the holdouts. “It isn’t that we are heartless. It’s that we’ve made the decision that we can’t go in there and replace waterlines and septic systems.”

Plese says they don’t have specific plans for the lot. They just want to get it on the market and off their hands. The area around the park, which is at the corner of Mullan Avenue and Highway 41, has developed rapidly over the past decade. Strip malls, fast food and a chain carwash share the intersection. Post Falls City Administrator Eric Keck says residents have seen the park as “kind of a blight.” It’s unsightly, and police have responded to some domestic violence and drug calls there, he says.

“From the complaints we’ve received, the majority of people are [saying], ‘What are you going to do to get this cleaned up?’” Keck says.

The next to leave was Cornett’s best friend, Denise. After she got her eviction notice, she moved to California because her husband got a job there, making it the only place they could afford to go.

“That just about killed me,” Cornett says. “We’ve lost so much of our community.”

Zoe Ann Olson, a housing attorney at Boise-based Idaho Legal Aid, says it’s not a new concern. While some states offer relocation help or require landlords to help pay tenants’ relocation costs, Idaho doesn’t have any sort of protections, Olson says. As Washington established a fund to help low-income people move and a program to help resolve disputes between manufactured home owners and the landowners they rent from, Idaho’s conservative Legislature has focused on property rights, Olson says.

Parks like the El Rancho often close when development sweeps through an area, Olson says, so situations like this were widespread until the recession hit. In 2007, 11 mobile home communities in northern Idaho closed, she says, plus more around the state. That puts people who can’t find a place to go in homeless shelters or on waiting lists for Section 8, government-subsidized housing. (In Idaho, the Section 8 wait list can range from one to three years.)

“Affordable housing and housing vouchers and those types of programs are really scarce right now,” Olson says. “You cannot afford to have a community closed.”

A notorious park in Pasco, Wash., was emptied last year after the city sued the landowner for failing to fix code violations. Inspectors cited health and safety concerns like damaged smoke detectors, missing locks, mold and cockroach infestations. In Airway Heights, Fairchild officials and housing groups are trying to find alternative housing for residents of some mobile home parks there. Housing advocates argue the conditions in some of the homes are unsafe and unsanitary.

About 17 million people nationwide live in manufactured homes, but some of them own the land they live on. There are about 56,000 communities like El Rancho in the country, housing about 2.9 million families, says Ishbel Dickens, executive director of the Seattle-based Manufactured Home Owners Association of America.

“A lot of people just don’t understand manufactured home living and what those communities are,” Dickens says. “I call them gated communities for low-income families. There’s a real neighborly sense.”

Mobile home owners who have no control of the land underneath their houses are especially vulnerable, advocates say. They are often low-income and without healthy savings to pay for a sudden move. Many of them depend on each other for help around the house or rides to doctors’ appointments. For landowners, the parks usually make less money than other types of development, and they’re often seen as an eyesore, so the chance to sell is seen as a relief.

“Every manufactured home community is for sale for the right price,” Dickens says.

When a lot sells in Idaho, owners have to give a minimum of six months notice. Then, it’s up to the residents to move. It costs about $5,000 to move a mobile home, and for some a lot more. State regulations and the rules of some other parks mean older homes need expensive renovations before they’re allowed to be moved or set up somewhere else.

Bob Flom, 68, bought his gray-blue 1978 home in the spring of 2008 for $3,000. Since then, with the help of a local nonprofit, he’s had the windows and heating and air systems upgraded. Flom is a retired truck driver and musician with a snow-white beard, deep laugh lines and long white hair. Back then, he played mostly old stuff — he likes Elvis and Jerry Lee Lewis. These days, he lives off Social Security and Medicare, and says he rebuilds old computers to give to low-income families. The edges of every room in his two-bedroom single-wide are stacked with furniture, knick knacks and computer parts.

“This thing’s airtight,” he says, tapping his finger on his kitchen table next to a phonebook and two packs of Necco Wafers. “I’m not giving it up.”

Flom expects it’ll cost him about $10,000 to get his trailer up to code and then move it to a new park. Right now, he guesses he has about $10 in his savings account, but he’s hoping a legal fight with the landowners could get him the money he needs.

He, Cornett and a few others left in the park asked Coeur d’Alene attorney Dan Sheckler to see if he can find anything that might get them a settlement from the landowner. Sheckler says he doesn’t have any official plans to file a suit, but he’s looking into whether all the residents were given written rental agreements, as required by law.

“This is the destruction of a community,” Sheckler says. “I’d like to see some effort by the landlord to create an alternative housing situation.”

Some residents at the El Rancho say even if they could afford to move their homes, they have nowhere to go. Their rent costs them $260 a month, utilities included. Most other parks have higher rent or more stringent requirements for the types and ages of homes they’ll let in. Apartments are often even more expensive.

The small rose bush at the front of Cornett’s home might be the last thing gone. Its single pink bloom is resilient, even under the blistering afternoon heat and dust of the occasional passing car, but it’ll be no match for the moving equipment that’ll take the home to its next piece of rental property. Cornett knows she’ll have to leave eventually, but she wants the landowners and the courts to hear her complaints first.

“I’m not taking this lying down,” Cornett says. “We need to make a statement for all low-income people.”