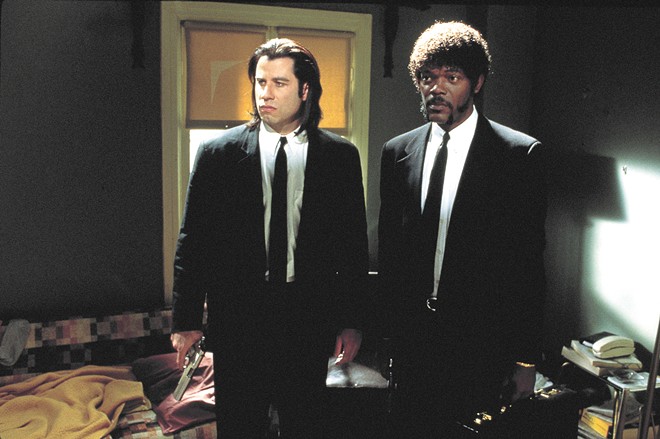 Whenever I told people I would be watching Pulp Fiction for the first time, there was a gasp. Undoubtedly, someone would question my love for movies and who I am as a person. If I watch movies so much, how could I have not seen one of the most storied films in recent memory?

Pulp Fiction was released in 1994 to great critical and commercial success, getting nominated for seven academy awards and winning Best Original Screenplay. Quentin Tarantino was still up and coming, and other classics like Forrest Gump and The Lion King were just coming out that year as well. Pulp Fiction brought John Travolta's dying career back to life and boosted the likes of Samuel L. Jackson and Uma Thurman to greater stardom.

Admittedly, even though I watch a lot of movies, my knowledge can be limited when it comes to films that came out before my time. I'm a millennial born in 1998 and most things I've watched from the '90s and before were for my college film classes, like Citizen Kane, Battleship Potemkin, The Maltese Falcon and other super-old films. They are the film textbooks that every class looks to for the fundamentals of moviemaking, but they also were the same reason that I didn't have much of an interest in older movies. They taught me a lot, but they were dated in terms of trying to retain the attention of younger people. For me, these were the overanalyzed films that I wrote essays and took mountains of notes on.

"Did people think this movie was really good?" I'd think, "or was it good because they watched it when they were younger and more impressionable?" I often ask myself the same thing when it comes to TV shows, video games and music I liked when I was younger, and it was the question in my mind approaching Pulp Fiction.

Further, Pulp Fiction would be my first Tarantino movie. All of the others slipped through my movie radar. I was diving into Tarantino's wacky world with no prior knowledge, other than that there were many fan theories surrounding the movie, like the suitcase or the Band-Aid on the back of Marsellus Wallace's neck. Besides that, I had no clue of what I was about to get into.

The early scenes in Pulp Fiction were pivotal in keeping me glued to the screen. I realized immediately the dialogue was great when I first heard the menial yet punchy conversation between Vincent and Jules involving the "royale with cheese" and the foot massage that may have gotten someone murdered. It mixed mundane, everyday talk with more serious situations, a theme prevalent throughout the film. The dialogue, while pedestrian by nature, kept me hooked. Vincent and Jules were dangerous hitmen of a notorious gangster, but I saw them as my unlikely friends. Even in the crude business of murder, they were searching for philosophical answers to even the smallest questions in life. They were on the search for happiness, which was very relatable. I was wary of my initial trust of the two characters, though, as I realized the movie plays with your perception of people and the roles they play.

There is a certain unpredictability in Pulp Fiction that gives it a chaotic edge. The couple in the diner hold everyone hostage, only to be held hostage by Jules and Vincent. Coffee seems to be a little bit of an afterthought to the friend of Jules who is forced to help the duo hide a body stinking in his garage, but it becomes the main focus when the Wolf comments on it minutes after. Marsellus Wallace, possibly the most powerful character in the movie, is put in a very vulnerable state and saved by Butch, the very person he was hunting. It was ultimately refreshing to watch a movie where I could never truly tell what was going to happen in the next scene, even though I surprisingly didn't get lost either.

I mentioned some older films were overanalyzed, but how can you not with Pulp Fiction? It has the perfect balance of things you know and things you don't know.

Why are bathrooms so prominent in the movie?

What does the use of each song mean for the scenes they're in?

What's in the suitcase?

Why does Marsellus Wallace have that bandage?

I found myself analyzing the movie in my head for days after watching, and I understood why it stuck in the minds of so many. I knew that I would only scratch the surface with one screening.

I hardly felt the two-hours-and-34-minute run time. My favorite scene was when Vincent injected Mia with the adrenaline. The pacing was so good when the characters were working at a recklessly fast pace only to stop for a dilated three seconds before actually injecting Mia. I held my face in anticipation. It was the same when Butch was about to leave the store where Marsellus was getting raped. I actively spoke to my screen, urging Butch that "you can't just leave him like that, man." I grew more on edge when Butch took his time to choose a weapon from the front of the store. Just take the bat and go! This masterful time manipulation by Tarantino got me really excited.

Watching Pulp Fiction gave me a new urge to watch all the other classic movies that I never got around to, since I realize that I may be missing out. My own perspective on filmmaking has been broadened in terms of how a movie can fit and stray away from audience expectations while still delivering on great performance, dialogue and scene construction. I'm going to watch the movie again, and I'll make sure my friends watch it as well. ♦

The original print version of this article was headlined "Zed's Dead, Baby"

Speaking of Film , My First Time