Religion, politics, history, the natural world, fantasy, scenes from everyday life — these major themes comprise much of the art history timeline, the tail end of which includes modern subsets like expressionism, abstraction and conceptualism.

Where does motherhood fit in? Good question. And one to which Mya Cluff's current exhibition Where Do I End, and You Begin? at Spokane Falls Community College provides numerous entry points, if not answers, for discussing the maternal experience.

"The short context of where my work is and where it came from is I had my oldest daughter in the middle of getting my [bachelor of fine arts]," says Cluff, who in 2017 graduated from Oregon College of Art and Craft, concentrating in ceramics.

"I had the double kiss of death being a ceramicist and wanting to make work about mothering," Cluff says, acknowledging that clay and other so-called "craft media" have not enjoyed the same status as classic art forms, such as painting.

From an art history viewpoint, Cluff's content is also atypical. Although '60s and '70s era feminists shone a light on disparities in art by or about women, motherhood in western art has been mostly whitewashed. Improbably asexual Madonna figures populated painting and sculpture into the early 1600s. By the 1700s, rosy-cheeked mothers and their progeny are depicted in lavish detail, no dirty diapers in sight. But it isn't until the late 1800s that motherhood is rendered with more candor by artists such as impressionist painter Mary Cassatt. Even so, rarely is there an exposed boob, belly or — heaven forbid — actual childbirth depicted.

Cluff realized that although motherhood can be accomplished by roughly half the population, it's surprisingly underrepresented in art history. And when it is shown, it lacks depth, she says.

"I found how on the surface [motherhood] can be very much sentimentalized and kind of sugar-coated and really wanted to figure out what the authentic view of it was," Cluff says.

In her research, Cluff cultivated connections with an online community of like-minded artists and others whose maternal experiences were integral to their worldview and artmaking. She found Kaylan Buteyn's Artist/Mother podcast, and Kate Fisher, whose website shows her working on a ceramic wheel with a toddler strapped to her back.

The influence of Janine Antoni's skeletal artworks can be seen in Cluff's depiction of a large white pelvic bone atop a terra cotta-colored female bust entitled "Crown."

"When I was making it I was thinking about more regal terms," Cluff says. "I wanted it to be something that commemorates motherhood."

But then someone suggested their own interpretation: "Ass hat," says Cluff, laughing. She's OK with that, she says, noting that making her work accessible to all — not just mothers — is important.

Broad-based accessibility is one of many reasons SFCC gallery director Cozette Phillips invited Cluff to exhibit at the college after seeing her work at the Emerson Center for the Arts and Culture in Bozeman, Montana.

"So many of our students are balancing the role of motherhood," says Phillips, who took over the gallery from Tom O'Day after he retired last year. That includes students in unconventional mothering roles, caretaking for siblings, partners, parents and friends during COVID, Phillips says. 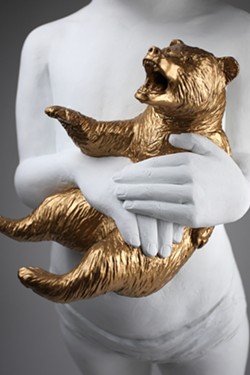 Detail of the roaring bear in "Heirloom"

Another goal with the exhibition is to present numerous views of motherhood, says Cluff, who will lecture about her work and demonstrate sculpting techniques on Feb. 8, the closing day of the show.

"Cry It Out" is another terracotta female bust whose eyes leak, its contrasting white glaze suggesting both tears and milk.

"Mother in Memoriam" is a stoic, all-white, wall-mounted bust with the word "MOTHER" carved into it. A crack running width-wise bisects the figure's downcast eyes, literally going through her head. The crack is filled with gold leaf, however, emulating the Japanese tradition of kintsugi or "golden joinery" to repair broken pottery and implying that cracks and repair work are integral to motherhood. It also reminds of the saying: That which doesn't kill us makes us stronger.

"The Myth of Complete Balance" shows a kneeling, nearly life-size nude female figure balancing a gold-covered baby on her forehead. Some of the gold is flecked onto her upturned face, reminding of the enduring connection between parent and child.

"Heirloom (What is Passed Down)" may be the most accessible piece, regardless of one's biology or parental inclinations. It shows a life-size girl painted white, holding a small but realistic-looking roaring bear against her bare chest — a riff on a child's teddy bear, perhaps. We can easily put ourselves in the child's place, looking warily out at the world, conscious of how we are distinct from but forever connected to our parents. In that way, "Heirloom" shifts the focus from motherhood to childhood, from the creator to having been the one created. ♦

The original print version of this article was headlined "Maternal Instincts"