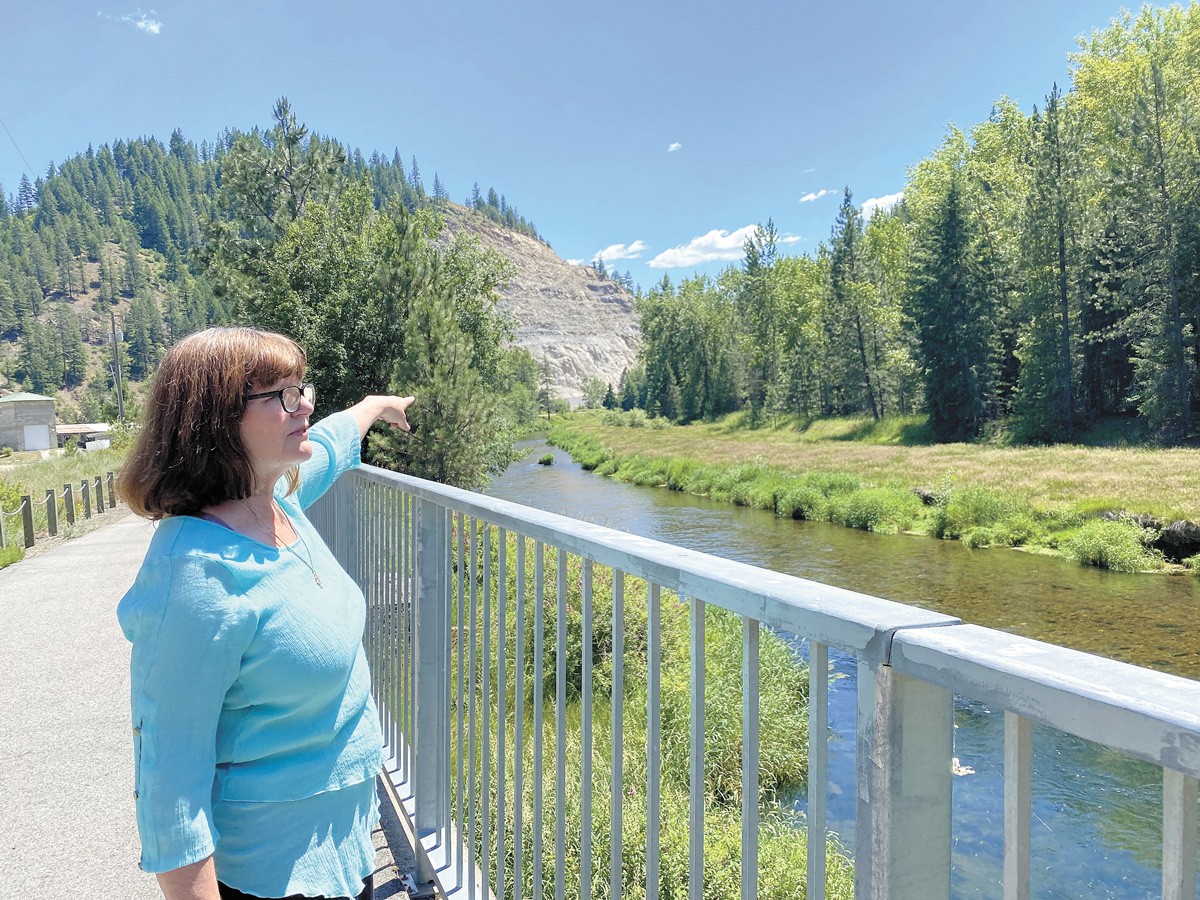 Samantha Wohlfeil photo
Dawn Wiksten, who founded Friends of the River Coalition, points out an old county dump site across the Coeur d'Alene River. A campsite (now for private family use) was built right next to the contaminated area.

Last Saturday, just as a historic heat wave hit the Northwest, thousands of people took to the north fork of the Coeur d'Alene River in Shoshone County, Idaho.

Groups on inner tubes and unicorn floaties and kayaks and rafts floated the crystal-clear waters after parking wherever they could find space along stretches of road lining either side of the river.

Some park their RVs for weekend getaways throughout the summer on private property rented along the river in this county of about 12,600 people. Others set up canopies and barbecues on any beach or rocky "sand bar" they can find. Locals say litter and trespassing can be common problems.

Meanwhile, kids splash each other as they run up and down the shores playing in the shallows — shallows that, in many places, are highly contaminated with toxic levels of lead, arsenic, mercury and more.

Booming recreation has come with a swath of problems for the region, but the risk to kids is what concerns some residents like Dawn Wiksten and her husband, Sid Clark, who live at the confluence of the north and south forks of the river.

"When you see the children playing there, you just go, 'Oh my God,'" Wiksten says.

The contamination isn't new, and neither is the lack of alarm among many who choose to live, work and play in the Silver Valley.

Home to the Bunker Hill Superfund site, which is heavily contaminated with metals from historic mining and smelting, the region is undergoing a decades-long cleanup spearheaded by the Environmental Protection Agency.

But as waters that once ran gray and orange with mining waste and sewage now run clear, and hills that were once yellow and barren are again forested, many people are drawn to areas that old-timers say they were not allowed to play in.

"All of the bare-naked land from the mining is done, we're green again, so people figure now, 'Let's go back to it,'" Wiksten says.

But like other parts of the Superfund site that are being capped or moved to landfills, the beaches along the Coeur d'Alene River contain dangerous pollutants. Government agencies say the river is uniquely difficult to clean.

"We've remediated over 7,500 properties in the Superfund site itself, but the river itself is a challenge, because how do you clean up a river? It's constantly flowing," says Mary Rehnborg, program manager for Panhandle Health District's Institutional Controls Program, which works on cleanup in the valley. "There's places we have that have got 20 feet deep of contamination. It's still something EPA, [the Department of Environmental Quality] and [the health district] are all working on together to come up with different approaches to."

For Wiksten and Clark, their concern is largely about Shoshone County and other government agencies allowing families to camp and play along contaminated parts of the river. At first, they worried about a neighbor renting out 10 RV spaces starting last year. Not only are kids at risk, but the area is a floodway, so contamination could shift anytime the river has a high water event.

But as they got involved in fighting that campsite — which has since been sold to a family that doesn't plan to rent it out — the couple learned far more about the larger issues with recreation along the river and decided to form a nonprofit called Friends of the River Coalition.

The 900-member and growing coalition — mostly made up of Shoshone residents, Wiksten says — intends to step in to help the river where they feel agencies in the area won't, from helping pay for dumpsters so river users don't leave their garbage everywhere, to posting their own signs to ensure everyone who plays there knows the risks.

"What else is going on on this river that is dangerous and opens us up as a county to problems down the road?" Wiksten asks. "If you don't know that an area is contaminated, you're playing, your kids are there, you're camping there, you're recreating in these areas. There's a certain amount of right and wrong going on here that is so evident."

First and foremost, Wiksten and Clark worry that people newly visiting the area won't know what they're letting their kids play in.


Clark has worked in the Enaville area for 30-plus years and says while camping along the river here isn't a new thing, the number of visitors has absolutely exploded in the last two or so years.

"Idaho has been exposed as a cheap date," Clark says.

Neighboring Kootenai County has seen rapid growth, with roughly 27,000 people moving in over the last decade, according to census data.

While Shoshone County's population hasn't grown during that same period, many who live in Kootenai and other close Idaho and Washington counties come there to recreate. With Idaho open for business while Washington was closed to prevent the spread of COVID-19, the issue got worse, Clark says.

Wiksten, who has a 17-year-old autistic son, and Clark, who has small grandchildren, have been aware of pollution in the area for years.

Panhandle Health, for its part, has worked to educate the public about the dangers of lead and other exposures throughout the valley.

On the properties surrounding Wiksten and Clark, there used to be health district signs that warned visitors not to get in the dirt. But those were removed when the properties were sold.

Rehnborg says the district can't force people to display signs on private properties that access the river, but the district does have new fluorescent signs that can be posted voluntarily. They encourage property owners to inform guests about contamination.

Wiksten and Clark were so worried about the signs coming down that they erected their own large brown metal sign on their land warning people about the nearby contamination.

Meanwhile at public access sites, and on social media and the radio, the district issues warnings, Rehnborg says. People are told to pack in their own water to drink (even filtered river water shouldn't be consumed), wash their hands for 20 seconds before eating anything (hand sanitizer won't remove lead), and to remove as much dirt as possible from clothes and belongings so it isn't tracked home.

"Unfortunately ... a lot of people who grew up here don't think the mine waste is a big issue, and they let their kids play in it, and there's nothing we can do to tell them not to," Rehnborg says. "There's a lot of people here who think it's fake and it's been hyped up."

The new owners of the RV site, Dennis Spencer and his wife, plan only to invite family and friends there. They feel common sense goes a long way in a world full of dangerous things.

"We are so surrounded by pesticides and poisons and contaminants, that there's no way of escaping it in our society unfortunately, so I'm a firm believer in moderation in all things," Spencer says. "If you're not wallowing in the dirt, sticking it in your face, making mud pies, and you clean up good before you head home, I'm assuming you greatly lessen your exposure to anything."

The district can tell people about the dangers, Rehnborg says, but they can't shut down recreation along the river.

"We really do want to protect people out there, but we are in Idaho, and this state is pretty anti-government and anti-regulation," Rehnborg says. "So we've got a tough job of trying to get people to listen, without having strict laws behind us to tell them what they can and can't do."

Friends of the River Coalition will hold its first fundraiser on Aug. 14 at the Shoshone Golf Club to raise money to pay for dumpsters along the river so locals don't have to deal with as much refuse left by irresponsible campers.


They also hope, over time, to ensure things aren't just being rubber-stamped in the area.

"We love the recreation aspect of this area; that's why we live here," Wiksten says. "It's just so beautiful everyone wants to be here, and that makes sense. But we have to have some regulations. ... Or we just need the agencies we have to be serious about the regulations that are already there." ♦