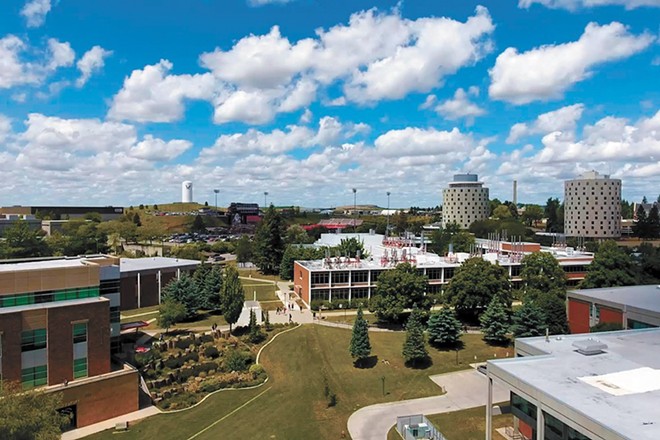 Less than two years ago, Eastern Washington University announced a partnership with Microsoft that it touted as one unlike any other in the country: It would be the only institution with the Microsoft Professional Program in data science integrated into a B.S. degree.

Now, the students in that program are benefitting from yet another EWU partnership. This time, it's with the city of Spokane, analyzing data counting the local homeless population.

"We only have so much in the way of resources," says David Lewis, manager of the city's Homeless Management Information System. "It seemed like a natural fit to reach out to [EWU] and see if there was a way to develop a sustainable program."

By working with the city, students say they've been able to apply their learning to issues directly impacting the local community. The first set of students in the degree program graduated last year as part of a pilot, and this year a new cohort of students is graduating from the program.

"It gives them real-world problems and they have to apply what they've learned to come up with solutions, to do research," Lewis says.

The collaboration started about a year ago, says Elizabeth Tipton, professor of decision science at EWU. When talking with Lewis, Tipton realized the city was only able to go so far with the data gathered as part of the annual homeless count.

"So we decided: Let's see what we could do by having out students work on it," Tipton says.

Groups of students were tasked with building a "dashboard," or a visualization to present the data taken from the point-in-time count up through 2018. One group chose to focus on racial disparities in homelessness, showing that black and Native American populations were more likely to be homeless than white people in cities around the Pacific Northwest. Another looked at how much funding for homeless services correlated with their homeless population.

Nicole Standley, an EWU student graduating this year from the program, has worked on developing a questionnaire to explore how to ensure the new Spokane Resource Center serves the community the best it can, before a presentation with city officials in June.  Lewis says that's a major value of this partnership: Students can help identify gaps in services.

"That particular point represents where I wanted things to evolve to," Lewis says.

Taptej Sidhu, another data analytics student graduating in June, says he's focused on reworking the database system to make it easier to manage. Sidhu says he was excited when the data analytics degree was announced because it's a valuable tool that many companies could use.

"We can come in and tell companies, 'This is what your data actually means,'" he says. "A lot of companies don't realize what a data analyst is capable of doing."

Tipton says elements of the data analytics degree have been available at EWU for decades. But when the partnership with Microsoft was announced, the department decided to focus on giving students the skill sets they need when they graduate. She says the students who have gone through the data and business analytics courses have an "impressive" skill set.

"I'd love to hire them," Tipton says. "What they're capable of is absolutely amazing."