New music we love: Fiona Apple's thrilling Fetch the Bolt Cutters is a rush of lacerating lyrics and swirling sonics 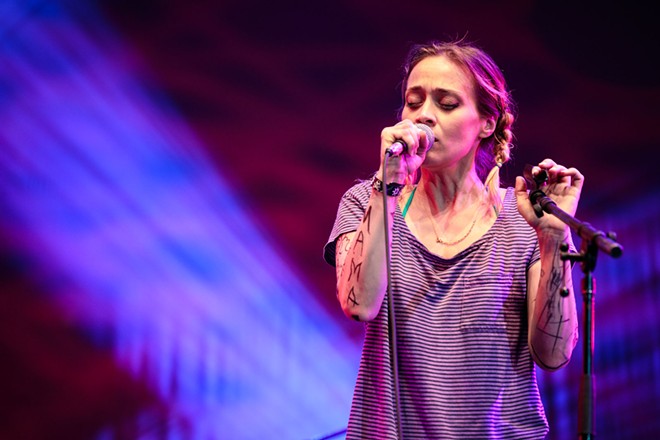 
You don't have to wander around the internet long before bumping into a rave review of Fiona Apple's new record Fetch the Bolt Cutters: It has inspired breathless acclaim, has already been labeled a masterwork and is notably the first new album in nearly a decade that Pitchfork has assigned a perfect 10/10 rating. (The last one, for reference, was My Beautiful Dark Twisted Fantasy by Kanye West, himself a noted Apple acolyte.)

Well, add our acclaim to the heap. The record has been available for a week now, and what's most undeniable about it is its stylistic restlessness and its emotional surety, as is its weird timeliness: Is there a more appropriate moment for an LP this jittery, reflective and cathartic to be dropped in our laps?

It's been eight years since Apple last released an album, and while so many of us are newly isolated, Apple has been living as a self-described hermit in the years since 2012's masterful The Idler Wheel... She has recently detailed the long and unusual process of making Bolt Cutters, part of which involved treating her house as an instrument itself: She and her small band would hole up inside for long stretches, recording fragments of songs in different rooms to achieve varying ambiences, slapping walls and stomping on floors and slamming doors.

That approach of weaving a cloistered lifestyle into the sound of the album itself immediately conjures thoughts of 1960s Brian Wilson, holed up in his Hollywood Hills mansion and chipping away at his ultimately aborted Smile project. (Another Wilson parallel: the snippets of Apple's barking dogs leaking into the recording made me think of a similar canine cameo in the Beach Boys' magnum opus Pet Sounds.) But unlike Wilson at that dark point in his life, Apple seems liberated here — not only from the singer-songwriter pop trappings of her earliest releases (which, it must be said, still hold up beautifully) but from her own insecurities and apprehensions. Isolation may have done her some good.

The lyrics on Fetch the Bolt Cutters are perhaps Apple's most playful, and also her most cutting, like we're reading from the pages of a diary that have spilled out on the floor. She revisits a vivid memory of middle-school humiliation ("Shameika"), vents about a society that pits women against one another ("Ladies"), details her struggles with long-term relationships ("Cosmonauts") and reflects on sexual assault and the traumas reawakend by the Kavanaugh hearings ("Relay," "For Her"). Throughout the album, Apple collects clever turns of phrase and offhand pieces of wisdom — "I would beg to disagree, but begging disagrees with me" or "evil is a relay sport when the one who's burnt turns to pass the torch" — and then cross-stitches them into the fabric of our brains. She'll repeat one over and over again ("Why did you take it all away? Why did you take it all away? Why..."), practically beating it into submission until it takes on the cadence of an anthem, or of a rallying cry, or of a personal mantra.

Fetch the Bolt Cutters is an arduous listen at first, and not just because of the frank subject matter. It's oftentimes deliberately atonal. It swoops and lunges between time signatures. Its compositions are cluttered with squeals and yowls and meows. The lyrics tumble out at us, as if they can't be contained by the speakers. The crazed percussion arrangements are as pushed to the front of the mix as Apple's vocals, and a barrage of drums and bells and cymbals will unexpectedly swerve into lovely piano balladry — and vice versa. But the album opens up and invites you into its secrets the more time you spend with it, revealing perfectly accessible, deceptively catchy songcraft.

Apple has said she lifted the album's title from a line of dialogue in U.K. crime series The Fall, but the phrase "fetch the bolt cutters" is most about the notion of breaking free from confinement, either societal or self-imposed. Apple does just that, and she pulls us along with her, plunging deeper and deeper into her beautifully controlled chaos. "Kick me under the table all you want," she taunts. "I won't shut up." Here's hoping.

A musical ray of sunshine during the pandemic: X has a new album out today

Fresh Spokane music from Windoe, Lavoy, Crystalline and many more just in time for summer