Nice to See You... Again

What’s the deal with Tech N9ne playing Spokane so often?

Even Spokanites who know little about the Kansas City rapper Tech N9ne have noticed how often he has played at the Knitting Factory over the past few years. Having just embarked on his “Independent Grind” tour, he is about to pass through Spokane for the seventh time since 2008. Inevitably, his show here will sell out; playing our city is apparently a sure thing for Tech. Inquiring local minds want to know:

What’s up with that?

It’s obvious Tech N9ne (who is not a fan of the letter “I” and whose real name is Aaron Yates) is tireless in his touring and self-promotion efforts. He has been a co-owner of the independent rap label Strange Music since a brief flirtation with Interscope disintegrated early in the decade. He’s been in the game for around 20 years, many of which have been spent struggling to get noticed and furiously touring just to get by.

Despite all that, he has attained a measure of notoriety as a slightly more radio-friendly cousin of oft-ridiculed horrorcore artists Insane Clown Posse and their ilk. For example, Tech’s amusing, mildly irritating alcohol anthem “Caribou Lou” can frequently be heard on the MTV program My Sweet Sixteen during the requisite “the party is starting!!” scenes. It is unlikely that anything from ICP’s catalog will ever be a part of that particular television program’s storied legacy.

It’s one thing to tour relentlessly; it’s another to constantly play shows in one particular city — especially one that, like Spokane, could be described as an unlikely market.

People in Spokane possess an abundance of theories regarding his visits here: that Tech has a house on Lake Coeur d’Alene, that he is originally from Spokane, that he has a “baby mama” here, etc. These diverse theories were met with predictable laughter from the emcee himself.

“Basically, in 2005 we were on our way to play our first show in Spokane,” Yates says. “We were leaving Billings, Montana, in a 15-person tour bus. There was a blizzard, we slid off the road, and we were told after the accident that we should have been dead.

“We wanted to make it to the show in Spokane anyway, so we took a jet over and got onstage with champagne bottles in our hands, just celebratin’ that we survived. So I think there’s been a connection with us and the city since that show. We get so much love in Spokane. I feel pretty personal about it.”

So what of Tech’s rumored houses and women in the Lilac City?

“Man,” Yates says, “I’ve partied in Spokane for years. With women. But I don’t have my own spot out there. We was at their houses.”

By Leah Sottile and Young Kwak 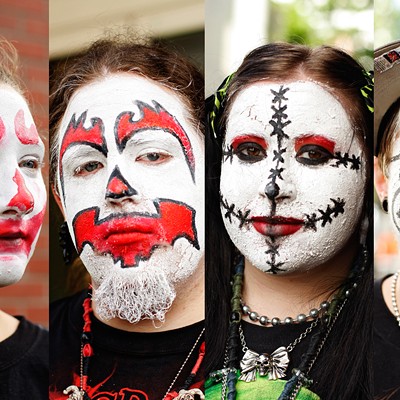