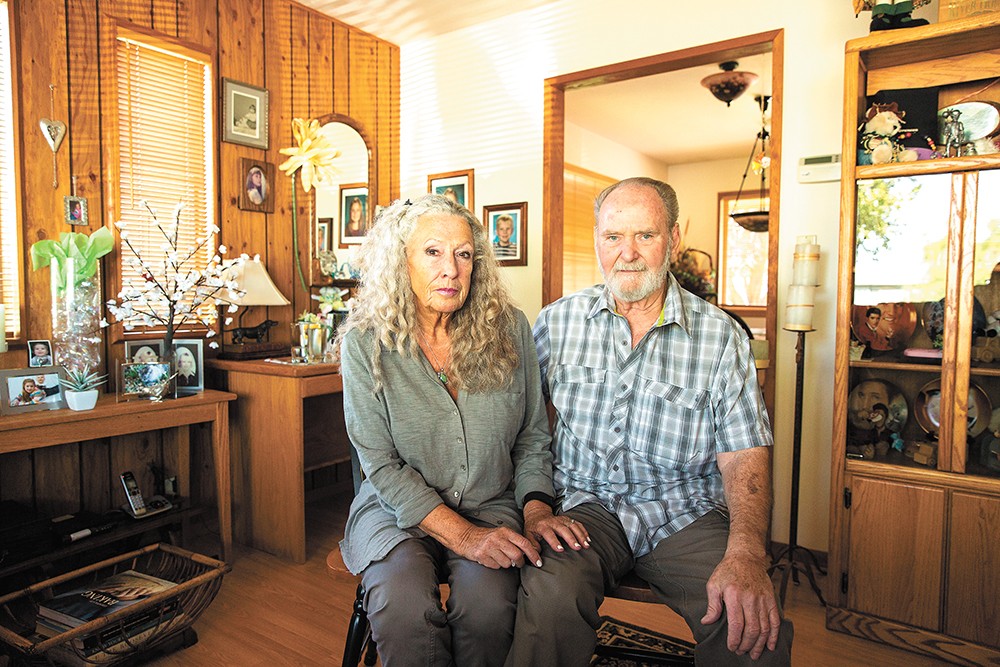 Institute for Justice photo
Terry and Ria Platt in their Prosser, Washington, home.

Terry and Maria "Ria" Platt, a couple from the small town of Prosser, Washington,

haven't been to Arizona in decades.But because of that state's civil forfeiture laws, prosecutors in Navajo County, Arizona, are trying to seize their car.

Earlier this year, the Platts, who live about 170 miles southwest of Spokane, loaned their 2012 Volkswagen Jetta to their son Shea for a road trip to Florida.

Shea Platt was pulled over by Arizona Highway Patrol because his elderly parents' window tint was ostensibly too dark, according to police reports. The cops eventually found a "personal amount" of marijuana, a pipe and a little more than $31,000 in cash in the car. Shea Platt was arrested, and police seized the drugs, the cash and his parents' car.

The Platts, both in their 70s, have never been charged with — much less convicted — of a crime, according to their attorneys. They were not in the car or even in the state of Arizona when police found the drugs and money.

Shea Platt was arrested in connection with the drugs and on suspicion of money-laundering in May of this year, but there are currently no criminal charges filed against him in Navajo County. The Navajo County Attorney's Office says it has received the police report and is currently reviewing the case.

Still, prosecutors there will not give up the Platts' Volkswagen, and technically they don't have to. In Arizona, prosecutors only need to show probable cause, not a criminal conviction, to take your property, according to state law. Attorneys for Terry and Ria Platt call those laws unconstitutional.

In court filings, attorneys from the Institute for Justice, the Virginia-based public interest law firm that represents the Platts, argue that Arizona's civil forfeiture laws give prosecutors, not judges or juries, decision-making power, create an inherent conflict of interest for police and prosecutors who benefit from the seized assets, and exploit property owners who are forced to navigate the confusing civil procedure.

Notably, Arizona's laws differ from Washington's and Idaho's. In Washington, property owners must first be convicted before police can keep their possessions. In Idaho, asset forfeiture is mostly tied to suspected drug activity.

"It seems bizarre that this can happen in the U.S. It doesn't seem right," says Terry Platt, who, along with his wife and with the help of the Institute for Justice, is suing the Navajo County Attorney's Office. "I don't feel like there's been any due process at all so far. Not being a lawyer, I just kind of gave up. I figured if we went after the car, the cost for representation would probably be more than I could get for the car, so I just decided, why try?"

'UNDER PENALTY OF PERJURY'

The elderly Platts didn't even know what civil forfeiture was when they got a letter from the Navajo County Attorney's Office. Confused and frustrated, they responded with a handwritten petition opposing forfeiture within the 30 days required by law.

Prosecutors determined the Platts' response was "null and void" but did not explain why, nor did they show the Platts' petition to the court, says Keith Diggs, one of the Platts' attorneys.

Not until the Institute for Justice got involved did Navajo County prosecutors explain themselves. In court documents filed in response to the Platts' lawsuit, prosecutors claim the Platts' petition is null and void because they omitted four words next to their signatures: "Under Penalty of Perjury."

"The implication of the State's argument is breathtaking," Institute for Justice attorneys wrote in response.

Prosecutors, who stand to gain from keeping the car, decide whether or not Terry and Ria Platt's petition is acceptable. No judge's eyes are needed for this case, prosecutors argue.

Diggs points to other problems with Arizona's civil forfeiture laws. The entire process takes place in the civil realm, meaning that property owners don't have a right to a publicly funded attorney like criminal defendants do, he says. Arizona law doesn't require a criminal conviction to seize assets, only probable cause. The law also allows the state to recover its own attorneys' fees if property owners don't get 100 percent of their possessions back. Property owners have no such rights.

Diggs says those reverse attorneys' fees create a "chilling effect" for people even attempting to reclaim their property.

Finally, Diggs says, Navajo County has no claim to the car based on the evidence. Arizona law requires that at least two pounds of marijuana be found before police can seize property — hardly a "personal amount" as described in police reports, Diggs says.

And the more than $31,000 in cash? Diggs says the only evidence of money laundering prosecutors have presented is that the cash was found "bundled" in the car. (Terry and Ria Platt, meanwhile, offer no explanation for their son's cash or weed, according to court documents.)

The Institute for Justice lawsuit is the second to challenge Arizona's civil asset forfeiture laws in as many years. In 2015, the American Civil Liberties Union filed a suit in federal court on behalf of Rhonda Cox, whose $6,000 pickup truck was seized by the Pinal County Sheriff's Office. Deputies stopped her son, who had installed a stolen hood and cargo bed without her knowledge.

Cox says she didn't fight the seizure because the cost of an attorney would have exceeded what she paid for the truck in the first place. In the complaint, the ACLU claimed that some asset forfeiture funds bought a home security system for the Pinal County Attorney's home and padded county attorneys' retirement funds. Pinal County asset forfeiture funds also have been used to pay for a political campaign pamphlet for Pinal County Sheriff Paul Babeu, who is running for Congress.

For Diggs, this case exposes a rigged asset forfeiture statute in a state that seized $36 million in assets in 2015 alone, according to Institute of Justice calculations. The process allows prosecutors to exploit property owners and requires them to prove their innocence, rather than asking the state to prove its case, Diggs says.

"That's not how the system is supposed to work," he says. "They should be doing their job to protect the public, not getting themselves assets." ♦

The contradictory and confusing process that is civil asset forfeiture in Sunnyside, Washington