6 Foot Swing doesn't just play the music of the Jazz Age - they recreate it. 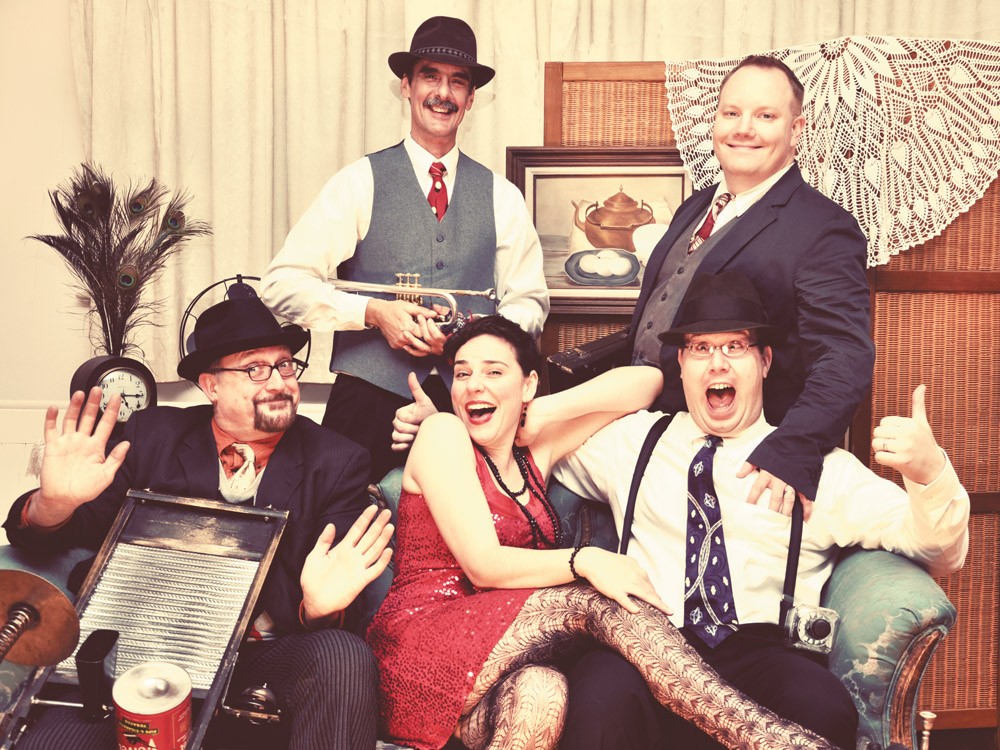 Heather Villa has a pet theory. The lead singer for 6 Foot Swing, a local six-piece jazz/blues outfit, says that when times are tough economically, bands like hers thrive.

“When things are shitty and the world is falling apart, you want to escape and you want to be happy.”

And escapism is precisely what 6 Foot Swing offers. Of course, the very nature of the music — timeless ballads like Gershwin’s “Summertime” and the sprightly standards that came to define the repertoire of artists like Ella Fitzgerald and Duke Ellington — has a lot to do with that.

Yet there’s another component, too, which might as well be considered a form of time travel. That rests with the band and its ability to evoke the authentic zeitgeist of an era that lies well in the past.

Crucial to that ability is the band’s strict adherence to songs from the 1920s to 1940s. That means no original material (for now) and no Bee Gees covers at weddings.

Then there’s their innate theatricality, which manifests itself in the way Villa (who is also an account executive at The Inlander) and her bandmates deliver vocal harmonies or solo on instruments like washboard, clarinet, and trumpet. Her own background in arts administration has been channeled into 6 Foot Swing. “This has kind of become my theatrical outlet,” she says. “We’re very showy. We all dress vintage, so I think that makes it very enticing for people.”

Anecdotal evidence abounds. There was, to name just one example, the incredibly positive audience reaction to their performance of “Summertime” in Coeur d’Alene Park last summer.

“I know it’s a song that a lot of jazz musicians pooh-pooh, as if everybody does it, but we really paint a picture with it. It’s a number I can really belt out, and the way [trumpeter] Michael [Lenke] does the fabulous Louis Armstrong intro to it — it’s beautiful, and he does it with a lot of the same purity that Louis did,” she says.

As their fourth album nears release, Villa is brimming with even more enthusiasm than usual. The CD, titled It Don’t Mean a Thing ... If It Ain’t 6 Foot Swing!, is clearly the band’s most polished to date. Their talented lineup — which includes founding member Jamie “Papa Scrubs” Flanery on washboard and veteran guitarist Steve Bauer — is as strong as it’s ever been. And their performances are turning the region’s lindy hoppers into ardent fans.

Nor is their music finding favor only among the growing swing community. Although Villa says they tend to play with the twisting, twirling acrobatics of swing dancers in mind, that certainly hasn’t limited their appeal. In fact, 2012 marks the fifth straight year that 6 Foot Swing has been voted Best Local Cover Band in The Inlander’s annual readers poll.

That string of good fortune might have made it harder for the band to sing the blues, but there is perhaps one potential cause for concern. What are the implications of those five consecutive wins if Villa’s theory is correct?