On The Way Up 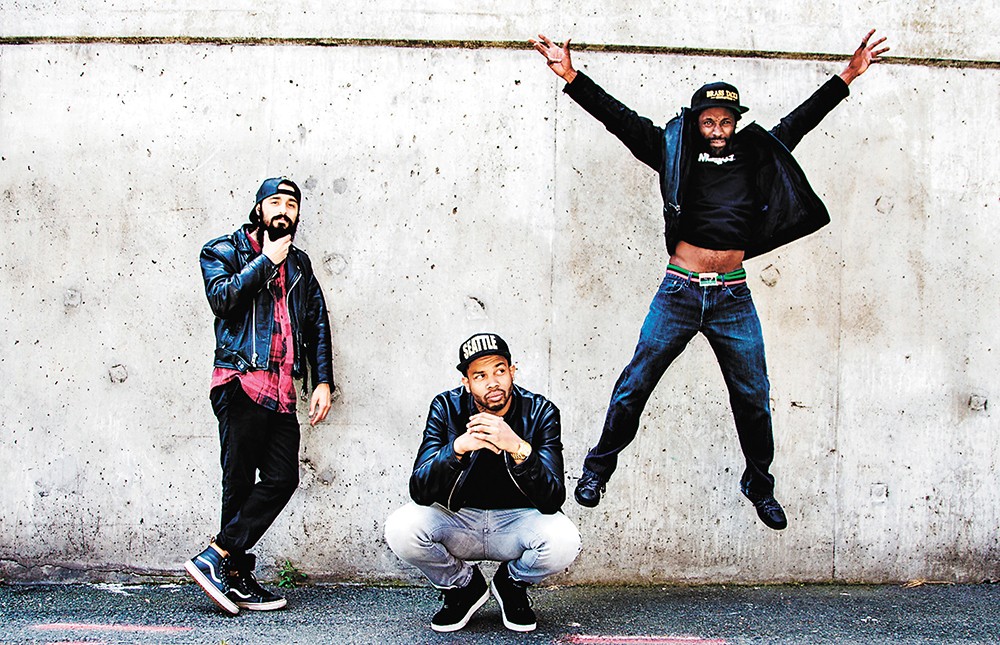 Karen Mason-Blaire
Ayron Jones (center) and his band The Way are on the fast track to Next Big Thing status in Seattle.

can drop some big ones.

"I'm being well taken care of by the Seattle circle of royalty out here," he says by phone. "You've got your Duff McKagans and Mike McCreadys, your Kim Thayils and Pearl Jams and Soundgardens and all these cats. They're taking care of me and putting the word out and helping me get pretty set."

If it sounds like Jones — white-hot guitar player, charismatic bandleader and prodigious vocalist — has led a charmed life ... well, that's partially true. The past few years have seen him and his two-man backing blues-rock band, The Way, elevated to Next Big Thing status in Seattle, where Next Big Things have a habit of blossoming into just plain Big Things.

They've had help along the way. For one, Jones has been cosigned by a gaggle of Rain City rock stars, including but not limited to those mentioned above. His debut album, 2013's Dream, was produced by Seattle rap godfather Sir Mix-A-Lot. And he recorded his follow-up full-length — Audio Paint Job, due out June 2 — with Barrett Martin of Screaming Trees and the legendary Jack Endino, aka the guy who recorded Nirvana's Bleach for $600.

"I'm a firm believer that if you hold your intentions, things will show up," Jones says. "I kept grinding and putting myself out there... As I did that, people started popping up to help me out."

But things weren't always so simple. Raised by his aunt in Seattle's Central District, Jones, 30, was surrounded by the music not only of his neighborhood, but also the city at large.

"The Central District was predominantly a black neighborhood full of middle-class and poor black families, so hip-hop was very prominent where I came from," he says. "But I'm a product of '90s music, and growing up in Seattle, grunge was everywhere, so I listened to all that stuff. Also, I grew up in the church, so I really got all that gospel and Motown influence, too."

Jones picked up playing on his own, teaching himself guitar and piano. He also received some formal training on the violin. "The only instrument I was taught," he says with a chuckle, "is the one I was terrible at."

By the time he reached his mid-20s, Jones was a raw and talented guitar player and singer with little idea of how to organize his musical thoughts into song. Halfway through working on Dream, Jones says, Mix-A-Lot halted the process and told him he would need to learn how to write a song with a hook, or his music was never going to sell.

"He kind of put that bug in me. Like, 'You are selling records, so you have to write music that's going to sell,'" Jones says. "That stuck with me [into the making of] my next album."

Indeed, the songs on Audio Paint Job are fully formed monsters that effortlessly fuse Jones' influences into one intense and aggressive sound. Lead track "Take Me Away" is a firestorm of heavy blues stomp, barbed guitar licks and hip-hop scratching. "Emily" swings a bit more, with The Way — drummer Ehssan Kirimi and bassist Bob Lovelace — digging into a grimy, subterranean groove as Jones wails about a lost love and wrings otherworldly noise out of six strings.

Elsewhere, Jones lets off the gas on "It's Over When It's Over," using a lush string section to showcase his somber side. "Play Me A Song" is a dusky, piano-driven ballad with an easygoing melody. And the electric guitars that drive "Boys from the Puget Sound" and "Lay Your Body Down" recall his hometown grunge heroes more than, say, Jimi Hendrix. Throughout, Jones belts his way through defiant and downcast lyrics fueled by a painful divorce and the addiction-related death of his mother.

"That whole time period was a blur for me, and music was really my only way to stay focused and see the light," Jones says about the making of Audio Paint Job. "Eventually it all settled and ended up being great for me, but it was tough emotionally."

And where Jones is now may be very different from where he is in a year. He's currently working toward the June release on Martin's Sunyata Records, but he's also considering several other intriguing business offers from record labels, management companies and more.

So Jones' future is up in the air, but of this he's sure: Good things are coming his way.

"We'll just have to see what comes down the pipe, man," he says. "Either way, this thing's gonna hit hard." ♦