Young Kwak photo
Maple Street, just north of the Spokane River, has a speed limit of 30 mph. Not everyone follows it.

Historically, more driving equals more deaths. That's why the stretch of time between Memorial Day and Labor Day is often referred to as the "100 Deadly Days of Summer." As the roads crowd with holiday travelers, traffic fatalities increase. It's a correlation that's stayed consistent for decades.

So when the pandemic hit in March 2020, Staci Hoff saw a silver lining. Of course, she worried about the virus' impact on other aspects of society, but with fewer cars on the road, it seemed like fewer people would die in crashes.

"We were really optimistic," says Hoff, a research director with the Washington Traffic Safety Commission's research and data division. "We were like, 'At least fatalities will go down, right?'"

Hoff says it only took a couple of months for researchers to realize that things were trending in the opposite direction. Despite a sharp decline in traffic, roadway deaths actually increased in 2020. Things got even worse in 2021. Car crashes killed 670 Washingtonians last year — the highest number since 2006. Fifty-seven of those deaths were in Spokane County.

As pandemic restrictions and remote work faded, people returned to the road. But across the country, the number of people dying in fatal crashes is still well above historical averages. It's not just because of speeding — data also indicates a rise in drivers dying in crashes because of drugs, texting, drinking and not wearing seat belts. Anecdotally, people are also reporting a sense of increased aggression on the roads.

Hoff has been with the Traffic Safety Commission for 10 years and says she's never seen anything like it. The way people drive and take care of each other on the road shifted during the pandemic, and it's unclear what it will take to turn things around.

"Something has fundamentally changed," Hoff says.

The most common explanation for the increase goes like this: In March 2020, roads emptied, and the few people still driving realized they could push their foot down just a little harder and get where they were going faster with little consequence.

Some people took it to the extreme. In April that year, several drivers took advantage of the empty highways to attempt what's known as the Cannonball Run — an illegal and very dangerous road race where drivers compete to see who can drive between New York and Los Angeles the fastest. A 2019 Audi sedan reportedly broke the previous record that spring and made the 2,789 mile trip in 25 hours and 38 minutes. Miraculously, they didn't crash or get pulled over.

The average speed for their odyssey across America's empty highways? 110 mph. For more than a day. It's not safe, don't try it.

Most people weren't going that fast, but there was a noticeable increase in speeding across the board, sometimes by just a few miles per hour. A study of metro areas across the country by INRIX, a Washington-based analytics company, found that, between July and April 2020, drivers were going 33 percent faster than normal. That means someone who normally went 60 mph was now going closer to 80.

Nick Briggs, a corporal with the Spokane Police Department, says officers in the department's traffic unit have seen an increase in the average speed of violators. People used to go 10 or 15 mph over the speed limit while speeding. Now they tend to break the speed limit by 20 mph or more, he says.

The convenience of empty roads might not be the only reasons people state driving faster in 2020. The pandemic was — obviously — a stressful time for everyone, and anecdotal and qualitative data suggests that a greater number of people started engaging in all sorts of irrational, risky behavior.

Think about all the viral videos of airplane fights or the people consumed by online conspiracy groups or causing trouble at school board meetings. Think about the people who, in record numbers, bought guns, gambled online, drank heavily and used drugs. Murder rates rose by nearly a third. Everytown, a gun safety organization, found that road rage shootings in 2021 were double the pre-pandemic average.

All of those things are tied to a number of complicated factors, and it's hard to pinpoint any exact cause. Some people tie the uptick in bad behavior to police reform efforts, stimulus checks or the political climate. Others argue that things were just tense and people snapped.

"We saw some more of that risk-taking behavior, which can definitely manifest itself as speeding and reckless driving," Briggs says.

On the road, people weren't just speeding in greater numbers during the pandemic. National data suggests an uptick in texting while driving, not wearing seat belts and driving under the influence.

The data is a bit tricky to parse at the local level, Briggs says, because the Spokane Police Department drastically reduced traffic enforcement violations to limit contact with people during the early stages of the pandemic. In 2021, officers from the traffic unit were moved to patrol to deal with staffing shortages and increased crime. Four officers returned to the unit this March.

At a statewide level, Hoff says she was shocked to see a big increase in deaths caused by people not wearing seat belts.

John Griffin was also surprised. He's the manager of Spokane County's Target Zero Task Force, which is part of a statewide initiative to reduce traffic deaths.

"I'm amazed because we have a really high seat belt use rate in Washington," Griffin says. "But I see over and over again, crashes come in where somebody's not made it through a crash because they weren't wearing a seat belt."

Substance use increased during the pandemic, and it continues to play an increasingly large role in crashes. Hoff says there's been an especially concerning increase in the number of fatal crashes related to people mixing drugs with alcohol or taking multiple drugs at the same time.

Observational studies conducted by the Washington Traffic Safety Commission also found an increase in distracted driving during the pandemic. Cellphones are the main culprit, but Hoff says the agency also saw a significant increase in other distractions, like eating, fiddling with the dash and people looking away from the road to talk to passengers.

It's not just drivers who are at risk. Hoff says there's also been a dramatic increase in bicyclist and pedestrian deaths over the past two years. That group used to represent about 1 in 5 traffic related fatalities, now it's closer to 1 in 4. Griffin says Spokane County has the highest pedestrian incident rate in the state.

Fatal crashes are historically concentrated on weekend nights when people were out drinking at bars. But in 2021, the trends shifted and weekdays — Mondays in particular — became the deadliest. It's unclear why. Hoff says she's looked back through decades of data and hasn't found anything comparable. The "100 Deadly Days of Summer" researchers were accustomed to has also shifted. Since the pandemic, Hoff says deaths are now spiking in the fall.

"There's a lot of discussion and pivoting and testing right now," Hoff says. "The assumptions we thought we knew have been flipped upside down the past couple years."

As pandemic restrictions fade, the number of cars on the road has returned to normal, but people keep dying in abnormally high numbers.

Nick VinZant, a senior research analyst at QuoteWizard, a Seattle-based insurance comparison company, has studied the increase. He thinks people got used to driving fast during the early days of the pandemic and stayed stuck in the habit even as traffic returned.

In the first half of 2022, nationwide traffic fatalities appeared to level off for the first time since spring 2020. But Washington was an outlier. The state saw 327 road deaths in the first half of this year. That's 31 percent higher than the same time period last year — the sixth-highest increase in the country.

It's hard to draw conclusions, and VinZant says it could just be a statistical anomaly. But it's also possible that driver behavior is returning to pre-pandemic levels across the country, and that Washington is taking longer to catch up because the state's pandemic restrictions were in place for longer, he says.

Some changes in driver behavior are hard to track with data. Anecdotally, Hoff says many drivers have reported an increased sense of aggression and frustration playing out on the roads.

"It's hard to describe what changed," Hoff says. "We all feel it, we all experience it, but the way that it's playing out on the road is just something we're trying to catch up on."

A few weeks ago, Ryan Overton was driving along North Division Street to pick something up at Home Depot when a car whipped past him doing 70, maybe 80 mph. The speed limit on that part of Division is 45 mph.

It's an unsettling encounter, but anyone who regularly drives on Spokane roads has probably seen something similar. Overton, a communications manager with the Washington State Department of Transportation's eastern region, notes that the state agency has seen a big increase in the severity of collisions over the past two or so years.

Last week, Griffin, with Target Zero in Spokane, watched as someone pulled up to a red light, came to a stop and then then blew right through it.

"I don't know what's going on, what's changed in the pandemic, if people are still stressed out or not fully recovered," Griffin says. "I'm just seeing more risky behaviors that normally you wouldn't see." ♦

CORRECTION: The original version of this story misattributed the last quote to Higgens, when in fact it should have been attributed to Griffin.

The original print version of this article was headlined "Faster, More Furious" 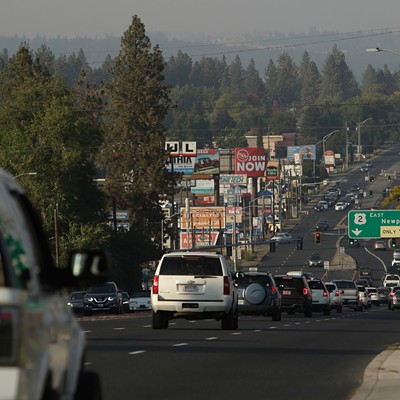