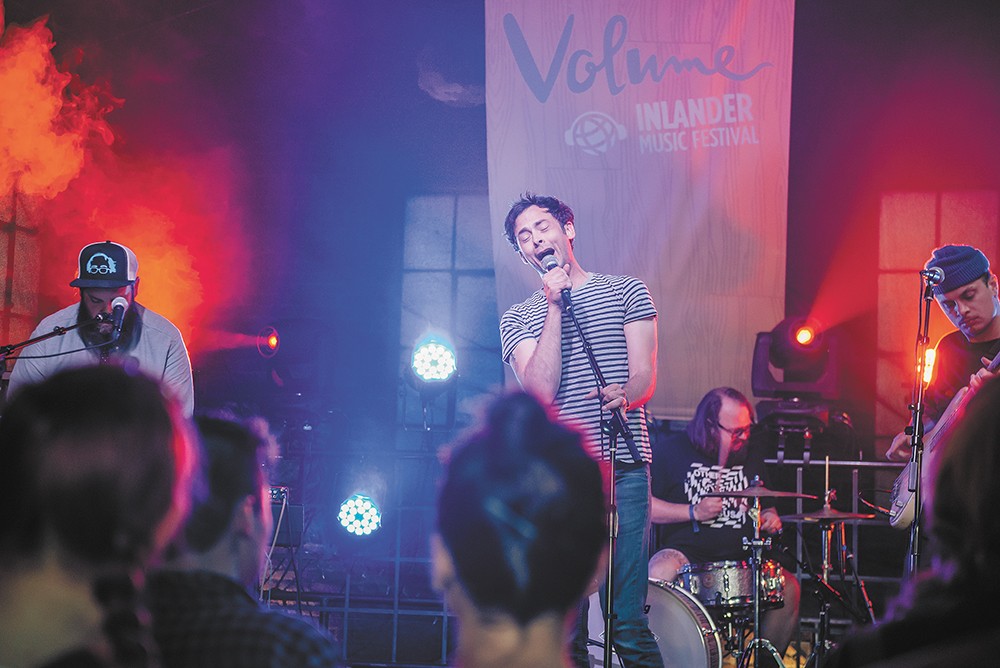 Erick Doxey
This year's Volume was Nat Park and the Tunnels of Love's first show.

First there's a scream, and then a crash.

"It sounds like a pool table just fell on someone," says Gawain Fadeley, guitarist for the new soul act Nat Park and the Tunnels of Love.

The culprit is actually a super-sized Jenga set toppling over on the Observatory stage. Fadeley and his bandmates, Ryan Dean Tucker (vocals) and Jeff Glinski (who's drummed for seemingly every band in the region), met up at this downtown bar last weekend to discuss how music just keeps pulling them in — even with so many distractions in their lives.

The Spokane music scene, for better or worse, is full of musicians who used to play in other bands, and this group came out of the instrumental surf-rock act BBBBandits, with the addition of William Brasch on keys and Alex Morrison on bass.

"We always wanted to do a soul band next," says Fadeley, whose guitar skills point to his devotion to the genre.

But it still took a year to get the group up and running. And with bands like Fitz and the Tantrums and Leon Bridges and even local act Super Sparkle on the rise right now, they didn't want to be seen as copying anyone.

"I hate that soul is being modernized," says Tucker. "I don't want to bastardize it. But no, this music isn't a reaction to the new trend of soul music we're seeing. We're making this our own."

So far, they've only played two shows; their third is Friday, the final Saranac rooftop concert of the summer. In that short amount of time, they've started to build a fan base and have shows booked for the next couple of months.

At the band's past two performances (at Volume and Riverfront Park), everyone has danced. When you hear this tight-knit sound, with its easy chord progressions, infectious beat and wildly enthusiastic lead singer, it'll make you want to, as Tucker says, "flip a wig or cut a rug."

"This is a band made up mostly of dads who dad pretty hard," says Fadeley, who occasionally freelances for the Inlander. "But to be clear, this isn't dad rock."

Down the road, they don't plan on getting famous or touring nationally, but they want to keep practicing most Sundays and write songs when they're supposed to be doing other things. They plan to record their first album soon; they just need five more songs.

"We're too young to be in a cover band right now," Fadeley says. "So this is it for the foreseeable future." ♦