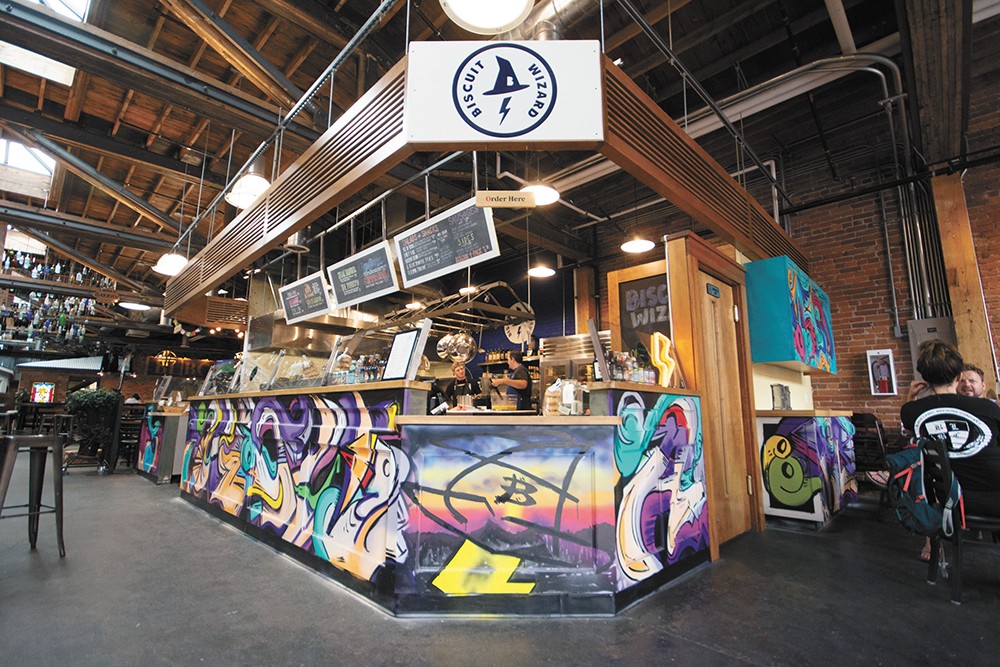 In a recent Facebook post, Spokane restaurant owners Kate and Jeremy Hansen shared the news that their two businesses inside the Saranac Commons would close effective Sunday, June 23.

"There are so many factors that have led to this decision, and it isn't one Jeremy and I take lightly," Kate Hansen writes. "Over time, some of our key players moved on to new ventures, and with our time being shared with our other locations, it became harder to maintain the consistent production and quality the business required. This has been one of the most joyous, but also the most heartbreaking journeys for us personally."

I love location-inspired cuisine, especially when I don't actually have to travel to get it, so the news that a spot offering Chicago-style hot dogs was opening in downtown Spokane was welcomed with open mouth.

A Chicago dog is a specific species of edible hound, and Chicago Dogs on Main gets it right, covering their Vienna Beef hot dogs with the required yellow mustard, electric-green sweet relish, onions, tomato wedges, kosher pickle spear, celery salt and (in what is my favorite topping) sport peppers. Those crunchy little gems add just enough spicy kick — they're roughly equal to a jalapeno, for comparison purposes — to what is a mouthful of food. All of it is delivered on a quality steamed poppy seed bun. And in case you didn't catch it on the menu, ketchup definitely does not come on the Chicago dog — but you can ask for a packet and add it yourself if you absolutely must.

While the Chicago Dog ($4.95) is the star of the little patio restaurant that opened in May adjacent to Luigi's Italian Restaurant, it's far from the only option. You can get a Polish sausage ($5.95) dressed with everything that comes on the Chicago dog, and because they know not everyone wants their hot dog "dragged through the garden" (as the menu describes its Chicago dogs' toppings), you can create your own Freestyle Dog ($4.95 hot dog/$5.95 Polish sausage) with any of the available toppings. A Lost Dog ($3.95) is basically a bun filled with whatever nonmeat options are available, or you can get the Seattle Dog ($4.95/$5.95 Polish option) with a Vienna Beef hot dog slathered in cream cheese and covered with caramelized onions — although I have no idea why you would do such a thing when a Chicago Dog is available. To each their own I suppose.

Chicago Dogs on Main is open Tuesday through Saturday from 11 am-3 pm, and there are a few patio tables to sit outside on the sidewalk. The counter plans to open for occasional weekend late nights and during major downtown events, too. Watch for flashing lights on the awning at 245 W. Main to indicate the dogs are waiting. (DAN NAILEN)

Jeff Messinger had three children depending on him by age 21, while he was working his way through the food service industry and navigating an assortment of bumps in the road. Illness, loss of transportation, an unexpected bill, the change of seasons and a downturn in work — Messinger understands how precarious it can be for those in the service industry. A couple hundred bucks, he says, can make or break you.

Now he's the general manager at Shooters Bar & Grill and Black Rock Marina and serves as one of many volunteers for CDAIDE, a grassroots organization serving hospitality industry workers in need since 2014.

CDAIDE started as a church committee from concerned parishioners at First Presbyterian in Coeur d'Alene, says Rebecca Smith, board president and co-founder.

It's similar to Big Table, a Spokane-based care organization which pastor and former food writer Kevin Finch — he's also friends with the pastor at First Presbyterian — developed in 2009. Like Big Table, CDAIDE fundraises through events like the annual February Care Affair dinner to provide services including financial aid and access to health care through word-of-mouth referrals.

"One really big difference is Big Table has a lot of staff but we're all volunteer," says Smith, who notes that CDAIDE is working on filling out board positions and connecting with care partners, such as mechanics, doctors and dentists.

The organization is also growing its network of industry supporters, which includes chefs like Laurent Zirotti of Fleur de Sel, Jim Barrett from Beverly's/Hagadone Hospitality, and Doug Johnson of Fire Artisan Pizza, who currently serves on CDAIDE's board.

One of their ongoing challenges, says Messinger, has been simply getting the word out about the organization. "If you know about it, you're eager to help," he says. (CARRIE SCOZZARO) ♦

Historic Iron Horse Bar & Grill in Coeur d'Alene has a new chef-owner, plus other food news