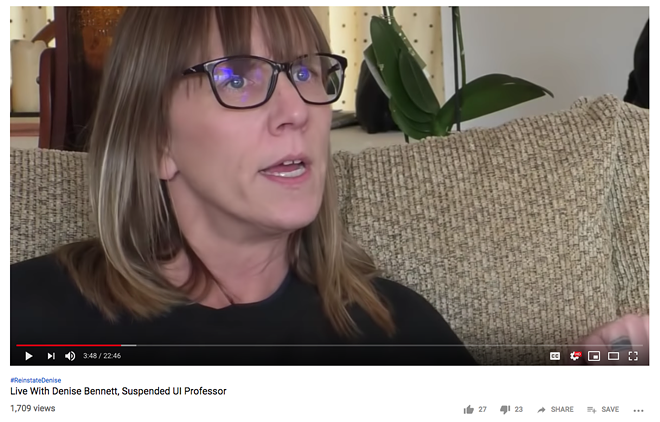 Screenshot of MLH Films live YouTube broadcast
Denise Bennett reacts to a letter outlining the reasoning behind and terms for her paid administrative leave, in a Jan. 29, 2019 live video.

The police report that University of Idaho officials said sparked a campus-wide alert about a professor on administrative leave this week does not indicate that guns played a violent role in the argument she was having when police were called last year.

The Moscow Police report from Nov. 4, 2018, obtained by the Inlander in a public records request, indicates emotional distress and substance use, but does not point to violence being involved in an argument between Denise Bennett and her husband.

Officers responded to a report of a domestic argument in progress with a firearm around 11:50 am that day. When officers arrived, Bennett told them "she was attempting to hide firearms from her husband to 'hurt his feelings,' but no guns were used during the altercation," the report states.

Bennett and her husband told officers she was trying to hide the guns under a blanket in her car so she could later sell them without his knowledge, according to the report. They both denied their argument got physical in any way.

They explained that problems in their marriage revolved around Bennett's drug use, and she told officers she'd last used methamphetamine the day before the argument, according to the police report.

She denied having the substance on her, and officers didn't find any in her purse or in plain sight in her car, the report states.

Officers tried to direct Bennett to resources including counseling and medical assistance. She denied being a threat to herself or others and denied medical assistance, but accepted counseling from a liaison from Alternatives to Violence of the Palouse, the report states. The scene was cleared without further incident.

That information was provided to the University of Idaho within about 12 hours of University President Chuck Staben making the call to issue a Vandal Alert on Wednesday, said Jodi Walker, U of I communications director.

The alert stated: "Denise Bennett has been barred from Moscow Campus. Recent admittance to police of meth use and access to firearms. If seen on campus, call 911" and led some on campus to wonder if they were in danger.

Walker later explained there was no indication of any threat to campus, but that officials worried about several converging factors.

Bennett had been placed on paid administrative leave Jan. 24, after arguing with a superior and emailing many administrators a message riddled with all-caps and expletives that expressed her frustration at bureaucracy at the university and the way grant money was being handled.

Students supporting her, who hoped to get her reinstated to teach in the Journalism and Mass Media school, were scheduled to hold a protest Wednesday before the university sent its alert and the event was postponed.

"The erratic behavior we had seen of Ms. Bennett in recent days led us to uncertainty about what could happen if she came on campus," Walker said Wednesday evening. "We’d rather err on the side of caution. Knowing there's a gathering of students gathered in one area definitely increases the potential for something to occur."

"We believed the situation to be very serious and the information relevant and important to convey the reality of our concerns to the community," says the statement, which notes Bennett is "banned" from campus.

Bennett has not yet responded to requests for comment made by the Inlander through multiple avenues, but she did respond to the Chronicle of Higher Education.

'I am not a threat to campus. I don't own a gun. There are no guns in my home,' she said. 'I'll be taking a blood test here soon,' she added, presumably referring to the accusation of methamphetamine use," the Chronicle reported.