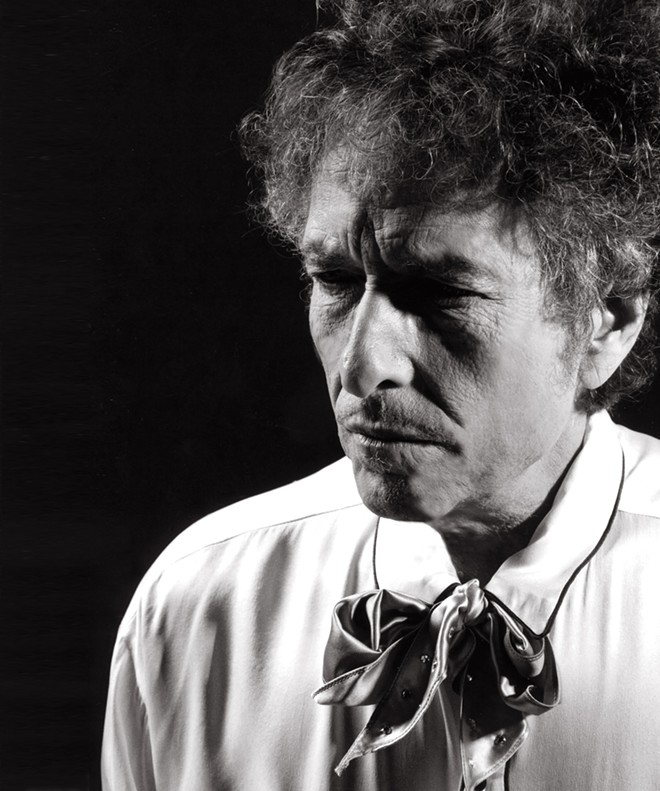 Bob Dylan kicks off his tour in Spokane on May 28.

I've already got my tickets for the folk legend's May 28 tour opener in Spokane, but I keep hearing the same refrains from people who have seen him in the past. For every person who has told me they saw a Bob Dylan concert and it was just the worst, I've had another say, "You know, he's a lot better live than most people say." These are fans who worship at the altar of Dylan, and yet they can't agree.

This is nothing new. When Dylan went electric in the mid-'60s, purists heard the barreling rock 'n' roll of "Subterranean Homesick Blues" and branded him the Judas Iscariot of folk, and some fans (especially those in the U.K.) booed him in concert. When his newfound Christian faith wormed its way into his early '80s output, Dylan found yet another way to alienate diehards: A Spokesman-Review write-up of Dylan's Inland Northwest concert stop in 1980, with a set that leaned heavily toward gospel, describes disgruntled audience members walking out of the venue halfway through the show.

Blowin' in the Wind
Don't Think Twice, It's Alright
Subterranean Homesick Blues
It's Alright, Ma (I'm Only Bleeding)
Like a Rolling Stone
Desolation Row
Visions of Johanna
Stuck Inside of Mobile with the Memphis Blues Again
Tangled Up in Blue
Hurricane

And in the 21st century, he's still ruffling feathers. The L.A. Times wrote about a 2012 Hollywood Bowl concert that had elicited divisive audience responses, saying that "there's one thing Bob Dylan fans will never agree on: whether his concerts over the last decade are terrible, excellent or just plain weird."

I wanted to explore this strange phenomenon, and so I reached out to a few local music writers past and present — the people who get paid to have opinions about live music — to get their thoughts on Dylan's live persona.

The Spokesman-Review's Carolyn Lamberson has seen Dylan just once, when his 1987 co-headlining tour with the Grateful Dead stopped in Eugene, Oregon. Of all the concerts she's seen, both personally and professionally, she says this particular show remains a low point.

"I went for the experience, but I remember being so bored by the Dylan set," Lamberson says. "He was intentionally doing stuff that not a lot of people were familiar with. ... There was nothing as an audience member for me to get really engaged with. I really wasn't able to pay much attention to him because he's just not a charismatic presence."

"He was not a performer that grabbed me and made me want to watch and listen. It was like bizarre background noise."

Jim Kershner, a former arts editor for the Spokesman-Review, reviewed Dylan when he performed at Pullman's Beasley Coliseum in 2000.

"Bob Dylan seems to do just about everything wrong," the review begins. "He alters the melodies of his beloved old songs, he mumbles his way through his famous lyrics, he plays guitar just about the way he plays harmonica, which is to say erratically, and his adenoidal voice has become alarmingly similar to that of Tiny Tim's."

(Kershner also shares with me a line that he recalls hearing over the years that mostly sums up his feelings about many a Dylan concert: "[He] performed many of my favorite songs, but I'm not exactly sure which ones.")

That 2000 review isn't all negative, though: Despite any misgivings about the actual performance, Kershner called the show "a huge, happy, memorable celebration" and called Dylan "one of a kind, like Woody Guthrie or Louis Armstrong, or to go even farther afield, the Grand Canyon."

Dan Nailen, the editor of this very paper, didn't become a serious Dylan fan until the musician's late-'90s/early 2000s renaissance, when albums like Time Out of Mind and Love & Theft brought Dylan a new wave of critical appraisal. Nailen has since seen him eight or nine times, and he has come to appreciate the acquired taste that is late-period Dylan's craggy, old-timer voice and the stable of talented musicians that back him in concert.

"A casual fan might wish he had played 'Subterranean Homesick Blues,' except he doesn't have the voice to do that anymore," Nailen says. "He's playing the old songs and completely pulling them apart and putting them back together, and they're virtually unrecognizable — in terms of the music and the lyrics — to what you're expecting."

"That's a bummer [for a fan] if you think that's not what's going to happen."

Don Adair, a longtime freelance music writer for the Spokesman-Review, has seen Dylan at least a dozen times over the years. He even tried to see him at the Spokane Coliseum during Dylan's 1966 world tour (though Dylan was a last-minute no-show), and saw him in the '70s when Dylan was still performing with the Band.

Adair says that some Dylan shows are noticeably better than others — he's also seen his share of walkouts over the years — but he appreciates the unexpected artistry Dylan brings to his live shows, even if it isn't to everybody's taste.

"I just truly appreciate the fact that this guy has found a way to continue on and make himself so relevant," Adair says. "He always comes up with new and interesting arrangements."

The most common complaints Adair hears about Dylan's stage demeanor — that his voice is shot, that he deconstructs his classic songs too much, that he doesn't have any banter with the audience, that he rarely (if ever) picks up a guitar anymore — aren't entirely unjustified, he realizes. But Adair says that walking into a current day Dylan show requires a recalibration of your most basic expectations: If you're going in hopes of sitting through the straightforward greatest-hits retrospective, you're simply not going to get it.

Besides, a musician who's been on a self-professed Never Ending Tour for nearly 35 years has to find new ways to keep audiences on their toes.

"There are a million reasons people can find to be unhappy. For me, it's just a matter of accepting the fact that he's an artist who's going to continue to change," Adair says. "I believe he'll be onstage until they can't prop him up longer. And then they'll just put him in a chair." ♦

As the folk quartet Mama Doll comes to an end, singer-songwriter Sarah Berentson reflects on their place in the local music scene