When Spokane went dark, the boundaries between wealth and poverty were sharpened in some ways — and blurred in others 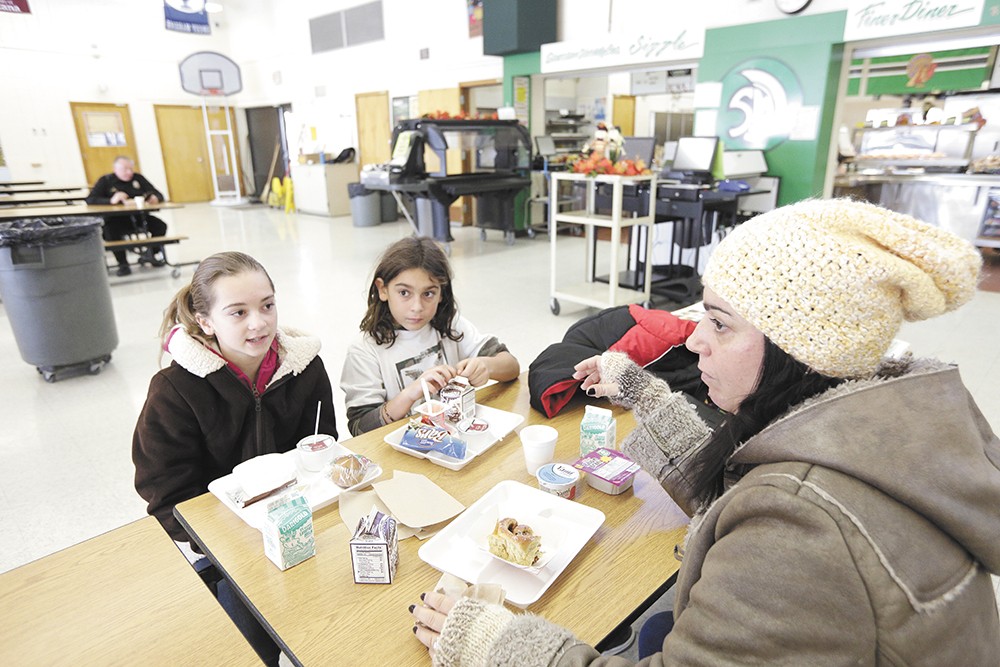 Young Kwak
On Nov. 25, Alisa Vashon and her children, Arona and Arlis, eat a meal at the Salk Middle School warming center, regaling each other with stories about the windstorm.

On 3:45 am on Friday, the day after Thanksgiving, Avista finally declared victory.

It had taken 10 days and unceasing work by around 100 crews, but finally the lights came back on for all 230,000 Spokane and Kootenai County residents who had lost their power in the near-hurricane-force Nov. 17 windstorm.

That morning, a sign on the doors to Ferris High School still greets any weary travelers with a message of hope: "Food, Power, Coffee, Movies. Enter here."

Crayons and coloring sheets are laid out for the kids, and games like Jenga and Battleship are provided for the families.

"Need Some?" reads a cardboard sign with a heart, above cardboard boxes filled with red and yellow apples from the Second Harvest food bank. "Please, take some."

"Even though people got their power back, they didn't have any food," Johnson says.

Food quickly spoils when fridges lose power. If you're living on the narrow edge of poverty, losing an entire fridge full of food in one fell swoop can cut into your budget in a way that's difficult to recover from.

Johnson knows this well. Like so many in Spokane, she had to throw out most of the food in her fridge. Nutrition services workers aren't paid much money — one reason their plight became a rallying cry for the Spokane Education Association's salary negotiations this fall.

Johnson was among the last few thousand to have her power restored. But it wasn't a damaged power line that was the problem. "I come out to find it was just a fuse," Johnson says. "I thought, 'wow'"

The powerless days were miserable. She'd go home in the late afternoon, check to make sure her two kitties were OK, and immediately try to get to sleep. She'd wear gloves and a hat, but she'd wake up in the cold in the middle of the night. "I just crawl in my bed," she says. "It got down to 42 degrees."

During the first few days after the windstorm,

Spokane Public Schools opened five warming shelters, at Ferris and Rogers high schools, Salk and Glover middle schools, and Grant Elementary. With school still shut down Thanksgiving week and power still out in parts of the community, a donation from Avista allowed the school district to keep Ferris and Salk open until last Friday.

Some came for the warmth and the power. Julian Gonzalez, a Shadle Park student in a bright green sweatshirt and a Seahawks hat, sits in the Salk cafeteria the Wednesday before Thanksgiving and says the power to his house nearby has been out for over a week. He talks about trying to sleep in the cold with a fire going in the fireplace.

"My throat, like — smoke builds up in the room, so it hurts your throat," Gonzalez says.

Not everyone who came to the warming centers lost power. Alisa Vashon and her children, Arona and Arlis, lunch on Raisin Bran, muffins, cinnamon rolls and chocolate milk.

Arona, 12, smiles giddily as Vashon, in her Bulgarian accent, recounts how Arona rescued their family dog during the windstorm, barely dodging the neighbor's trampoline before it smashed into the side of their shed.

For families like these, school being closed is a hardship itself, no matter the weather or power situation. They often rely on the social services that schools provide, like free or reduced lunches and weekend food packages provided by Second Harvest's Bite 2 Go program.

"I cannot budget for everything," says Vashon. "I do depend on those reduced meals. It's kind of embarrassing, but that's what it is."

The school system didn't forget about their family, Vashon says.

Vashon says the principal of Browne Elementary knocked on the door a week after the storm to make sure she was OK and bring them some food. "She sent me a text and said, 'I'm outside of the house, and I'm bringing you the Bites 2 Go,'" Vashon says. "You get little snacks — pretzels, nuts, individual packets of cereal."

many who never had to rely on services like shelters and food banks found themselves asking for help.

"We had 90 families come through on the Friday [Nov. 20]" says Sheila Geraghty, business administrator of the local Salvation Army. "And 20 of them were clients who have never come to our food bank before."

The Salvation Army managed to save all their food. They kept the freezer closed and put the milk on ice. All the food in danger of spoiling was cooked up on gas burners, feeding families a feast with turkey and bread and cranberry sauce.

Dean Whisler, social services manager for the men's shelter at the Union Gospel Mission, says that normally, only about 200 people come to get meals from UGM each day. After the storm, 300 to 325 were flooding in daily.

"We saw quite a spike of non-homeless people," Whisler says. "People of all economic statuses who were without power who were coming in here and eating. A couple of nights we came close to not preparing enough food. We got overwhelmed."

Avista mailed $150 Rosauers gift cards to approximately 3,000 customers who were the last to get their power restored, and donated about $75,000 to groups including the American Red Cross, the Salvation Army, Catholic Charities, and St. Vincent de Paul.

Several pairs of missionaries from the Church of Jesus Christ of Latter-day Saints volunteered in the Salk cafeteria warming shelter. Elder Chase Peterson, dressed in a Superman T-shirt, says he and other Mormon missionaries walked across the community after the storm, offering to aid anyone in the cleanup efforts, cutting downed trees and stacking wood.

"We were walking down Country Homes [Boulevard]," Peterson says. "I was just in tears, seeing how people would — their houses were broken in, with trees that fell down. It was just so sad."

After a crisis, a community feels compelled to come together. It's why Johnson doesn't understand why people ask her why she gave up her Thanksgiving to serve cafeteria food at Ferris. To her, the answer is obvious.

"I didn't give it up. I met family and friends that I will probably hold in my heart forever. That's the reason why I did it," Johnson says. "That's the meaning of Thanksgiving Day." ♦