A short set of stairs end inside a dimly lit, cellar-like space.

Hogwash is one of two new food and drink ventures by Spokane restaurant owner and chef Jeremy Hansen and his wife Kate. The couple's tally of establishments — including the French-inspired Santé Restaurant & Charcuterie, which opened eight years ago — now totals five, along with the existing Butcher Bar inside Santé and Common Crumb Artisan Bakery at the Saranac Commons.

Just above Hogwash Whiskey Den, on the restored historic building's first floor, Inland Pacific Kitchen is set to open late this month with a series of soft-opening "test" dinners in the days leading up to a grand New Year's Eve dinner, featuring a menu consisting solely of white-colored foods. The reservation-only Winter White Menu with absinthe pairings (+$45/person) is $120 per person. Test dinners are set for Dec. 15-17, 21-23 and 28-30, at 6 pm, for the same price.

The couple first decided to open a fine dining restaurant in the historic downtown building more than a year and a half ago. In the basement beneath the Inland Pacific Kitchen is a large catering kitchen that also services Hogwash.

"We always considered doing something down there; some kind of bar," Chef Hansen says of the Hogwash space. "It was going to be cheaply done, but then these cool ideas came. And we did do it cheaply with recycled everything, utilizing pieces that were in the building. As we were building, it just turned into the Hogwash Whiskey Den," he adds.

A whiskey locker program with annual membership rates of $200, $500 or $1,000 allows customers a variety of options to keep their own liquor on site, stored in a repurposed vintage filing cabinet system behind the bar.

While the underlying culinary philosophies of both new spots are similar — Hansen sources products almost exclusively from the Pacific Northwest, and subscribes to a whole-animal butchering philosophy for meats served at all of his restaurants — the atmosphere and aesthetics of Hogwash and Inland Pacific Kitchen (IPK, for short) present apparent contrasts. 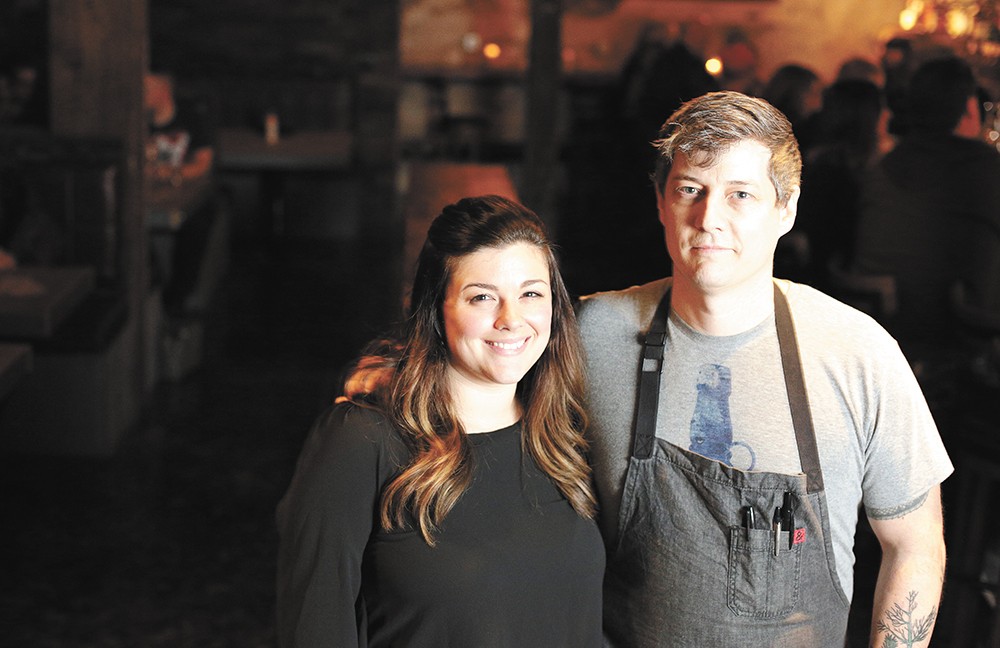 Young Kwak
Kate and Jeremy Hansen have been at the forefront of Spokane's culinary boom.

In the southwest corner of the red brick building,

the tall windows of Inland Pacific Kitchen fill the space with ethereal afternoon light on an overcast day. Walls of white and tones from light gray to deep charcoal create a contemporary, European-inspired setting. All the dining room seating is framed around an open chef's kitchen in the center of the room, enabling guests to see every aspect of their meal's preparation.

Though it would be natural for those familiar with Hansen's flagship Santé to guess that Inland Pacific Kitchen will be similar in style, he's taking a varied approach to what he describes as progressive-style food at this new spot.

"It will be more flavor-forward and technique-driven food that's meant to make you think about what you're eating and experiencing, other than eating to be nourished," he says. "You're eating art, and these are small plates, but I'm not going to have five to six things on a plate — it'll be three ingredients done really well."

Hansen's menu for Inland Pacific Kitchen's debut lists four items each in three categories: vegetarian, at $8 each; local dishes — one includes chanterelles with black garlic, shallots, currant confit and corn-fried brioche — at $10 each; and a protein section with halibut, beef, prawn and pigeon, at $12 each. Guests can sample from each section as they wish, with the option to try all dishes in a tasting-style menu for $100 per person.

"It's going to be really fun. I get to do the cooking that I have been thinking about for years as Santé was building and opening up," Hansen says. "During that time I've been developing a future-wise style of cooking that we get to do here."

Differing from Santé's local-sourcing focus, Hansen also plans to occasionally feature ingredients that can't be harvested in the region. This will open up options to serve a dish at Inland Pacific Kitchen with, say, mangoes or pineapple.

After the staff settle in, the restaurant plans to also serve a weekday lunch menu from 11 am to 2 pm, most likely starting in January. Unlike the small-plates menu offered during dinner, Inland Pacific Kitchen's lunch is set to consist mostly of burgers and sandwiches, and similar to items served downstairs at Hogwash.

The new space with its central chef's kitchen was also designed with cooking classes in mind. As they're planned, these and other future events are to be posted on the restaurant's website or shared via a newsletter.

Though Santé features seasonal menus with rotating weekly or daily specials, this new eatery will change its entire menu every three to four weeks. There are plans to feature special menus for guest chef collaborations and one-off events like beer-, wine- or spirit-pairing dinners.

"The menu will be inspired by cuisines and stories and themes and culture," Hansen says. "We were just in Japan five months ago, and we learned about the art of kaiseki and omakase – which means truly balanced dishes — and at the bar we're going to have the omakase chef's bar, which will be the chef's whim, like at a sushi place."

This reservation-only, all-you-can-eat option offers just six seats each of the four nights a week that Inland Pacific Kitchen is open, and at a price of $100 per person.

"This is what I do. I love it," Hansen summarizes. "I want to do it the best we possibly can. It's a journey to help develop the food culture in Spokane, and I want to live in a city that has all these amazing options." ♦