How the battle for the Washington governor's mansion could be affected by the court fight in the other Washington. 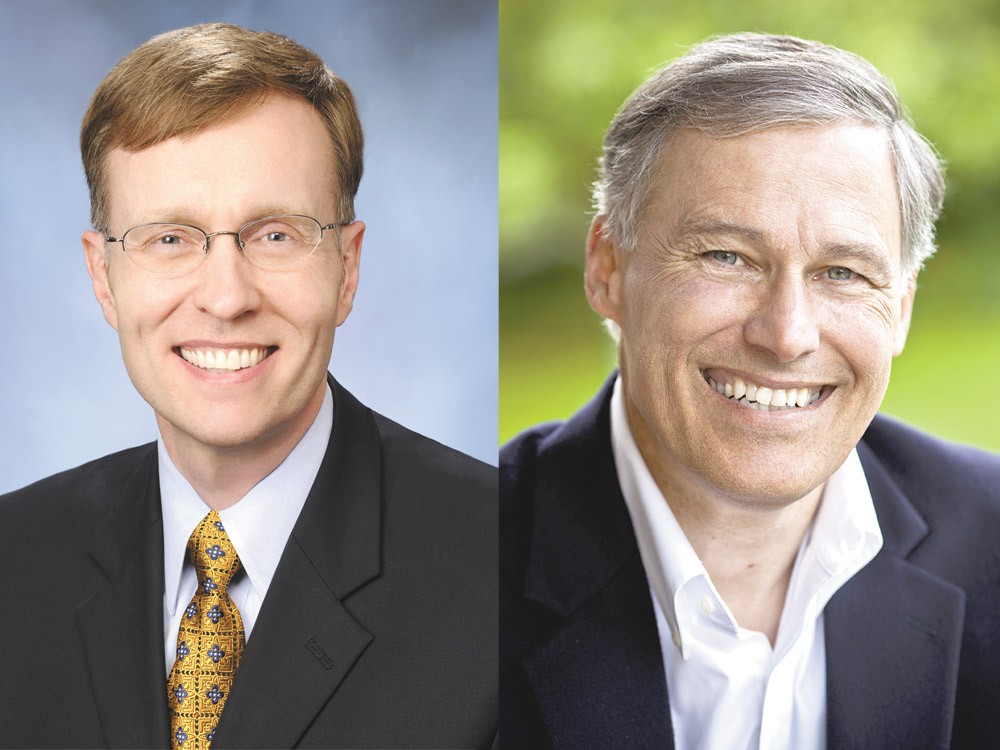 Last week’s Supreme Court deliberations over the Affordable Care Act framed the health care overhaul in terms of federal authority and individual rights, but it could also help frame the race for Washington state’s governor.

Jay Inslee, a Democratic congressman and gubernatorial candidate, pushed for key provisions of the overhaul. His opponent, Republican state Attorney General Rob McKenna, joined 25 other states in trying to get the high court to rule it unconstitutional.

McKenna is opposed to the individual mandate and to the expansion of Medicaid called for by the act but is in favor of allowing people to stay on their parent’s health insurance until they’re 26, as well as a ban on denying coverage due to pre-existing conditions.

“I can imagine both the Democratic candidate and the Republican candidate talking about it,” says Blaine Garvin, a political science professor at Gonzaga University. “The more they emphasize those points, it seems to me … all that would do would be to solidify partisan support and not really change much.”

But others say that the court’s verdict could have unpredictable effects on the campaign, which has already seen Inslee quit his seat in Congress to focus on the race. And if recent polls are any indication, it could be a tight race. Last month, polls had Inslee trailing McKenna, but this week, Inslee was headed 38 percent to 34 percent in a poll commissioned by the Service Employees International Union.

“I think if the Supreme Court says the entire bill is constitutional [and] it needs to stay in place, I think that will definitely energize the conservative base and Republican Party and may energize independents,” says Roger Stark, a health care policy analyst at the Washington Policy Center, a think tank advocating free-market ideas.

If the act is repealed entirely, says Jonathan Seib, a policy adviser to Democratic Gov. Christine Gregoire, the state will be left with a number of derelict, unfunded plans and programs that it will have to figure out what to do with.

“If the entire act is struck down, we have to get together the next day and start evaluating the status of our state laws … to see if the state law is so dependent on federal law that we could not move forward,” Seib says.

For instance, the state’s health benefit exchange, an online marketplace for health plans mandated by the overhaul and scheduled to open in 2014, may not survive a repeal, because it relies on funding and guidance from the federal act. Both Seib and Stark say the pressure would then be on politicians to come up with an alternative to the federal overhaul.

Others thought McKenna’s decision to challenge the individual mandate would come back to bite him.

“What that says to people is we have an attorney general who did not want to see affordable, respectable health care for all. I just think that’s wrong,” says Diane Sosne, president of Service Employees International Union Local 1199NW, which endorsed Inslee.

Beva Miles, former chair of Republicans of Spokane County, predicted that since most Republicans are against the overhaul, the verdict would do little to swing the race. And if elected, she believes, McKenna would figure out a way to reform the system himself.

“I think he understands the need for health care revision, but not like this,” Miles says. “It has to be constitutional and it has to benefit most people.”

Garvin, the professor, believes the race won’t be settled by Democrats or Republicans but by those in between. And it takes more than one issue to sway independents.

“I really think that vote would go for a more global kind of sense of things rather than the details of a single issue,” Garvin says.

He may be right. Considering the state’s revenue forecasts, the fact the state Legislature is once again in special session, and the supplemental budget — whenever it’s finished — may cut education funding, leaving other things on voters’ minds come November.