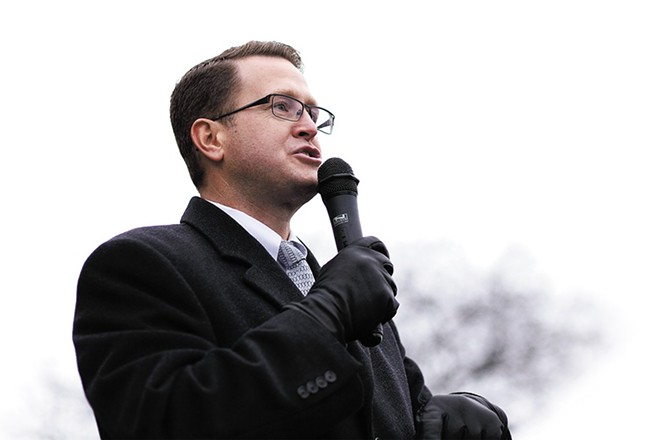 Rep. Matt Shea doesn't want his upcoming deposition in a defamation suit to be public.

Few local court filings are as clearly relevant to the public interest as the deposition of a state representative being sued for defamation.

That's doubly true when he's being sued by a Spokane County Sheriff’s deputy, who alleges the state representative defamed him by falsely suggesting the deputy's gun had been used in a triple murder.

Not only but that representative, Rep. Matt Shea, is on the state public records task force, appointed to determine which legislative records should be open to the public and which should remain shrouded in secrecy.

But now, Shea, through his attorney, is attempting to take extra steps to hide at least one record from the public: Shea's own deposition.

Jarrard declined to share the email with the Inlander, but did read the relevant portion over the phone:


“We ask that you and your client consider an agreement to not disclose Mr. Shea’s deposition to anyone short of subpoena with notice to us, and Casey Law, and Mr. Shea. We ask that excerpts can [be] used with specific pages cited for motions and it can be used for trial impeachment, but it cannot be released to the news, or any other party, including [Spokane County Sheriff] Ozzie Knezovich without Mr. Shea’s consent or a court order.”


Jarrard says there's no way his team will agree to the request.

He has seen parts of depositions made confidential in some circumstances, such as those involving juveniles or sensitive issues. But this one is strange.

"This kind of a blanket 'I don’t want my sworn testimony to be shared with anybody or the public or the news' I’ve never heard," Jarrard says. "In my work, that is over-the-top. Cases like these are public matters."

Originally, Jarrard says, Shea's deposition would have occurred before the November election, but it has since been bumped due to scheduling conflicts.

In a statement to the Inlander, Shea's attorney, John Randolph, says this situation is not rare:


“Thank you for advising me that Mr. Pendell’s attorneys are commenting on a confidential letter that requested a discovery conference. This letter requested a meeting to discuss CR26(c)(6) protection of deposition contents, which is allowed by court rule and is in no way unusual given the circumstances in this case. All I can say is we have great case to put on and that Spokane Community needs to hear what really happened. Out of respect for Judge Moreno, whistleblowers involved, our future jury, and my ethical obligations as an attorney under RPC 3.6, I refuse to comment specifics of this case because I do not want to poison the jury pool.”

"In 27 years, I've been a lawyer, I've only had one case where orders sealing a deposition came up," Beggs says.

But there is a part of Washington law, he notes, that allows for preventing the release of discovery documents when it's required "to protect a party or person from annoyance, embarrassment, oppression, or undue burden or expense."

One issue, he says, is whether a deposition covers broader territory than simply the matter at hand.

If it's just, , focusing on whether public comments from a public figure were defamatory, then the deposition's release is unlikely to be considered any kind of violation of privacy. But if it strays from those boundaries and starts digging into personal or private stuff, then a judge might be willing to issue a protective order.

Either way, he says, the media might have an interest in preventing the deposition from being sealed.

"In the good old days when media people had lawyers to do this, they would bring in a motion to undo that protective order," Beggs says. "If it has to do with matters of public interest, then maybe that wins the day."

Shea has long feuded with the two parties called out specifically in his request to seal the deposition — Sheriff Ozzie Knezovich and the news media. Shea and the sheriff have accused each other of being dangerous and dishonest.

Knezovich says that, to his knowledge, his own depositions have never been sealed.

“I’m just amazed that Matt would want to do that," Knezovich says. "My deposition will be open to everybody. I don’t know why he’s worried about what he’s going to say."

Also named in Pendell's lawsuit was longtime Knezovich nemesis Scott Maclay, who later went on to run against Knezovich for sheriff. Maclay died in a motorcycle accident in September.

As for the media, Shea has called reporters "dirty, godless, hateful" and generally refused to return phone calls or requests for comment. One sore spot for Shea, in particular, was a Spokesman-Review article written a decade ago that relied on court records to detail domestic abuse claims.

The Seattle Times has urged the GOP to remove Shea from the public records task force because of his years of animosity toward the media.

Still, in the United States, defamation cases are particularly difficult to win. To prove defamation against a public figure, you have to prove "actual malice." Pendell would have to show not only that Shea's claim was false and damaging, but also that Shea acted with "actual malice" — either saying something he knew to be false or exhibiting a reckless disregard for the truth.

In 2015, Shea detailed on his podcast what he referred to as a "bombshell," tying triple-murder Roy Murry's weapons to sheriff's deputy Travis Pendell:

"This is unbelievable folks, somebody that was, that is in jail right now on a triple homicide, the gun traces back to a sheriff's deputy," Shea said.

A 2016 Internal Affairs investigation, however, did note that Roy Murry had transferred several of his weapons to Deputy Travis Pendell through a third party dealer back in after an arrest made Murry temporarily ineligible to possess firearms.

In 2015, after Murry's firearm rights had been restored, Murry committed triple-murder. At least one .233 caliber pistol that had previously been temporarily given to Pendell was found in Murry's vehicle, but it was not determined to be the murder weapon. The internal affairs investigation ended with an 'unfounded" determination, concluding that no laws or policies had been broken.