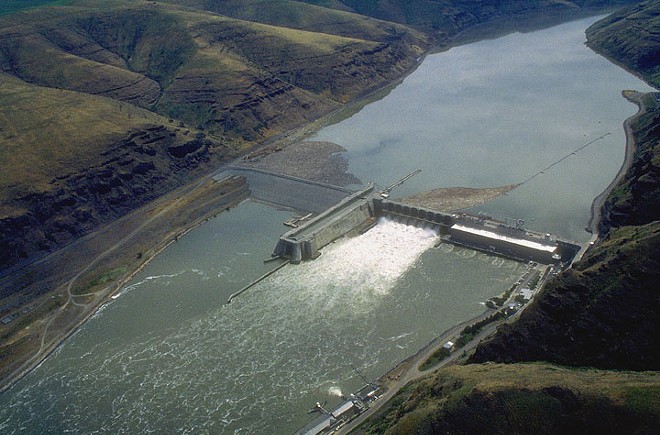 U.S. Army Corps of Engineers photo
The Lower Granite Dam is one of four on the Snake River that some groups want to talk about removing. A state process to study the impacts of removal is being debated as lawmakers decide whether to fund community meetings or not.

A proposal to spend $750,000 to conduct community meetings throughout Washington state to talk about Snake River dam removal has drawn plenty of attention from both proponents and opponents.

As our story this week touches on, many of those opposed to the state "stakeholder process" think that it would duplicate the work of an ongoing federal environmental study. Some take issue with the idea that dam removal is eventually going to be called for to restore salmon and other fish.

"This discussion kind of almost presupposes an outcome, and I think we need to let that [federal] scientific process kind of run its course," says Kurt Miller, executive director of Northwest RiverPartners, a coalition of public utility districts, farmers and other businesses.

But while the federal environmental impact study (EIS) will look at potential economic impacts if the four Lower Snake River dams were removed, it might not get into as much detail as communities would really need to understand and plan for the full impacts of removal, proponents of the state meeting process argue.

For instance, much of the short rail line used by Inland Northwest farmers in decades before the dams were finished in the 1960s and 1970s has since been abandoned. Farmers could highlight where that infrastructure is, where additional grain storage might be needed if barging of grain were to go away, and how else they might be economically impacted with prices if they have to pay to ship their product by truck or rail instead of barge, explains Bryan Jones, a wheat farmer who likes the idea of the state study.

"Agriculture farmers can’t be left holding the bag and not be allowed to have an affordable method to ship their grain," Jones says. "They have to have a voice, they have to be included and they need to have level-headed people that will come to the table and engage in the conversation."

Rather than duplicating the federal work, the statewide community meetings, as proposed by Gov. Jay Inslee's Orca Task Force, could actually inform the official comments that the governor and state submit for the federal EIS, says Jim Cahill, senior budget assistant for natural resources in the governor's office.

"This would include the gambit of things that are part of that, in terms of economic impacts on agriculture, fishing, tourism ... as well as the potential social impacts. What does it do to the communities? How are they impacted in the long run?" Cahill says. "The idea is to collect this information and inform the EIS process as it's moving along."

Those opposed to the state meetings include many who barge grain and other products along the Snake River, business that's only possible in that area because of the dams.

For Rob Rich, vice president of marine services for Shaver Transportation Company and president of the Pacific Northwest Waterways Association, the concern isn't so much about the state collecting more data. In fact, he thinks it'd be good for decision makers to better understand the importance of the Snake River dams. But, he worries whether the state meetings would be fairly conducted, as ports and businesses that operate along the river were not largely represented on the Orca Task Force.

"We thought it was odd that the very people that would be affected by some of the recommendations were not represented whatsoever on the task force," Rich says.

If the state meetings are funded, barge companies would plan to be very vocal about impacts to their industry if the Snake River dams were removed, he says.

"It would take away 50 percent of all of our crew and barging," Rich says. "There’s a big ripple effect. Hopefully the stakeholder process would have the opportunity to have some of that shared."