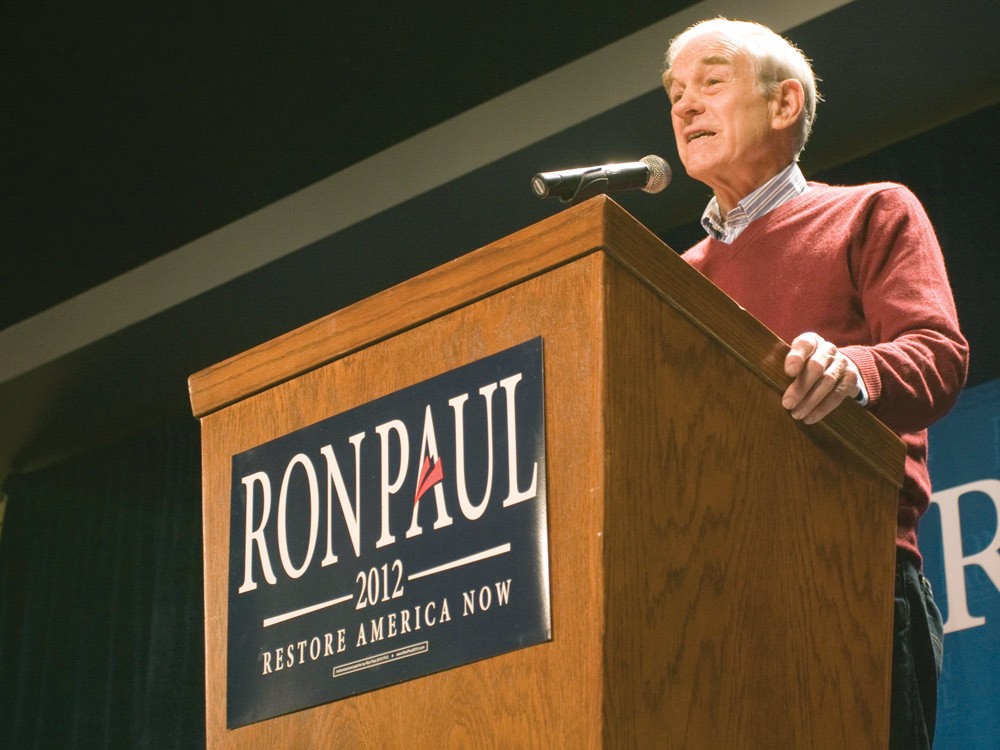 He doesn’t use a teleprompter, or even notes. Republican presidential candidate Ron Paul doesn’t need them — he’s been giving basically the same stump speech for years.

Paul is the first presidential candidate to speak in Spokane during this election cycle, and it’s safe to say no one will speak like him. Instead of lambasting Obama, he targets premises that have long been a part of the Republican Party platform. He goes historical, economic, sweeping and detailed. He attacks wars — all wars — and economic assumptions going all the way back to Alexander Hamilton.

He dives deep into wonky fiscal policy about central banking, the gold standard, and the crowd actually cheers. These are not his B-sides. These are his crowd-pleasers, his encore hits.

“Four years ago, I was told, there was a brushfire started here for the cause of liberty,” Paul tells about 2,500 people in the Spokane Convention Center on Friday night. “Looks like it’s more than a brushfire now.”

The crowd chants, “End the Fed.” They boo whenever the word “bank” is mentioned.

The last time Paul ran for president, in 2008, Washington state used both a primary system and caucuses to determine support for the national race. In the primary, Paul came in fourth in Spokane County, with a mere 12 percent of the vote. But caucus-goers went overwhelmingly for Paul. He polled at 46 percent — far higher than any other candidate. And this year, to save money, Washington state got rid of its primary. It’s all caucus now.

This means that for Paul, little Spokane, Wash., provides quite an opportunity.


State Rep. Matt Shea, R-Spokane Valley, is one of Washington’s most ardent conservatives and outspoken opponents of gay marriage. Kirk Smith, also of Spokane and the former spokesman for the local Tea Party, is a gay libertarian. Michael Cathcart is the top legislative aide for Republican state Sen. Michael Baumgartner, who has mounted a challenge to incumbent U.S. Sen. Maria Cantwell.

But for all their differences, they’re united in their support for Paul.

“What brings people together is freedom and liberty,” Shea says after the speech in the halls of the Spokane Convention Center. Shea also introduced Paul. “For 24 years, he’s upheld the Constitution. He’s always taken the side of liberty and freedom.”

It’s a message of approval echoed by Cathcart and Smith, who previously worked together on Paul’s Campaign for Liberty but later found difference when Smith suggested Tea Party members might find reason to vote against Baumgartner in his inaugural race taking on Chris Marr.

In Paul, there’s almost something for everyone. Some like his anti-war views, others for his promises to gut the federal government, or the way he champions homeschooling. Still more like his views on ending the War on Drugs.

Almost everyone. U.S. Rep. Cathy McMorris Rodgers is the fifth-highest-ranking Republican in the House of Representatives, where Paul serves. She has endorsed Republican presidential front-runner Mitt Romney and is chairing Romney’s Washington state committee.

Paul’s view can be controversial. Where his opponents debate tough methods to prevent Iran from getting a nuclear weapon, Paul opposes both sanctions and military action as acts of war.

“If I were an Iranian, I’d like to have a nuclear weapon, too, because you gain respect for them,” he says.

And where Republican presidential debate audiences cheered Texas Gov. Rick Perry’s execution numbers, Paul tells The Inlander he has come to oppose the death penalty. There’s too much racial discrimination, he says, and too big a chance of executing the innocent.

“I don’t know all the intricacies of the politics here, but she does what she has to do,” Paul says when asked about McMorris Rodgers’ support for Romney. “If I can galvanize supporters for my campaign in her end of the country, that’s the way competitive politics works.”


Ron Paul might not have McMorris Rodgers behind him, but his website proudly trumpets even the smallest of endorsements, including Spokane precinct leaders like Cathcart, Bonner County Commissioner Cornel Rasor, and Spokane County Treasurer Rob Chase.

That fits perfectly with Paul’s local strategy. States like Washington run caucuses, but delegates from these caucuses can vote any way they want at the national convention. Enthusiastic Paul supporters plan to flood the delegate-choosing process, gaining a far bigger voice at the convention.

This happened in Spokane County in 2008. And already Paul supporters have been using this strategy. In one county in Colorado, Santorum received more than double Paul’s support among caucus-goers, yet, according to an email from the Paul campaign, all 13 delegate spots went to Paul supporters. If neither Santorum nor Romney garner enough supporters in time for the campaign, then suddenly those delegates — and Paul’s unique views  — will have an outsized voice.

“You could be outvoted, but people still get elected as a delegate,” supporter Kirk Smith says.