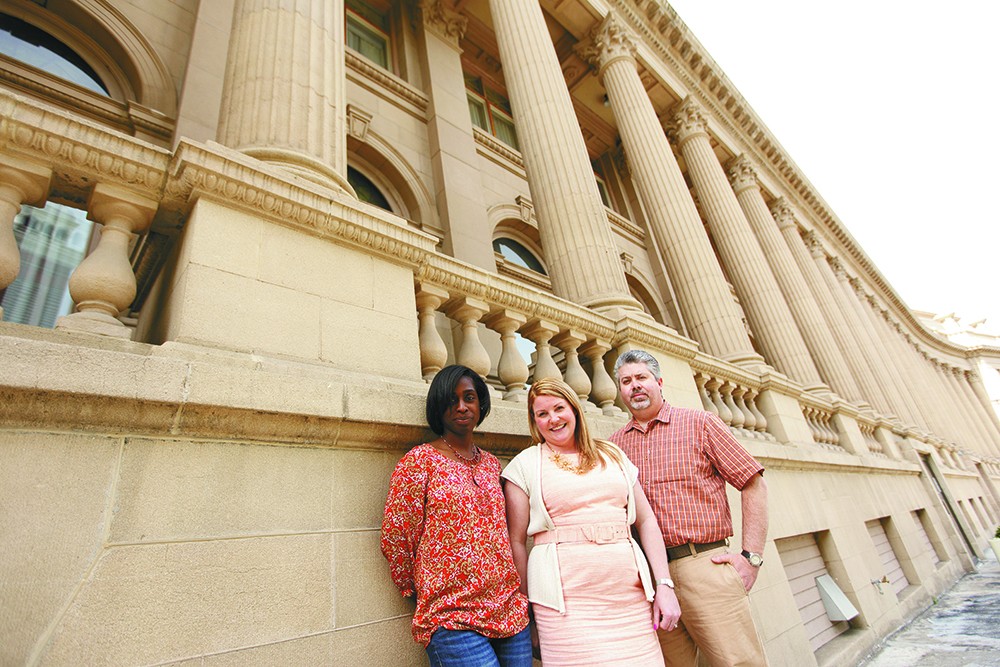 In 109 years, Greg Newell and his wife Luisita Francis Newell are only the second owners of Spokane's stately, columned Masonic Center on West Riverside Avenue. As such, they've uncovered many striking discoveries going beyond the fraternal group's extensive history steeped in culture, tradition and closely guarded ritual.

In the large, theater-style halls used as both Masonic meeting sites and public event venues over the past century, the Newells found original, leather-covered theater seats with wire racks underneath for men to stow their top hats in a time when such headwear was socially required. Walls and columns in one of the stateliest halls, the Blue Room, feature elegant, handpainted Egyptian motifs dating back to the mid-'20s, when a massive addition to the original 1905 structure was built.

The Newells bought the downtown landmark — which they're now operating as the Riverside Event Center — for $1.1 million last fall, after it had been on the market for just over a year. With a fraction of the membership the Freemasons enjoyed at the time the grand temple was built at a cost of $75,000, the Masonic Temple Association opted to sell the facility, which had become increasingly costly to maintain solely for private events.

"It's definitely a big project, but [Greg] is from Australia, and they don't have that same richness of history," Luisita Newell says. "It's always been a passion of his to restore a building... We always hoped that whoever bought the building wouldn't tear it down and would maintain its historical significance to the city. And then that turned out to be us."

When they moved to Spokane about five years ago, the Newells never envisioned they'd take on the extensive task of renovating and repurposing the Masonic Center. It's an endeavor Greg Newell currently estimates at — on the conservative side — more than $4 million.

Throughout the 110,000-square-foot, five-story building, gleaming mahogany furniture has remained for as long as its walls have stood. In a large, first-floor auditorium, the stairs of a stage hinge to reveal an otherwise hidden recessed orchestra pit. Backstage, rigging for backdrops is still labeled with handwritten tags, listing props related to Masonic rituals and other performances hosted there over the years.

And, of course, the former Masonic Temple is replete with the organization's symbolism: carved into its woodwork, in the multitiered levels in lodge halls denoting leadership hierarchy, and by the iconic square-and-compass emblem repeated throughout.

Powerhandling rendering
A rendering of proposed changes to the Masonic Center.

The Newells' plans include a complete restoration to showcase the center's historical legacy as both a Masonic Temple and a space that's hosted many civic events over the decades, including theatrical plays, concerts, proms, weddings and other occasions.

Currently they plan to add up to two full-service restaurants, two bars, two lounges, a cafe, and a supper club, all of which are intended to extend the center's use beyond privately hosted events. The Newells envision those food and drink spots being leased through owner-operator agreements. One of the biggest and most spectacular changes is a planned rooftop terrace with a restaurant/bar and event space, with views on both sides, of the Spokane River and Riverside.

These changes are set to be completed in multiple stages, likely over a few years' time, along with restorations of the building's historical features. All of the main event halls are to remain as currently configured, but will require several safety updates to comply with building and fire codes. Architectural and interior design for all of these upgrades is underway now, says Greg Newell.

Because of the building's listing on both the local and national historic registries, as well as being part of the Riverside Avenue National Historic District, the Newells must maintain and preserve much of its original architectural details, including the 18-columned facade. That exterior underwent restoration back in 2005 thanks to a $300,000 federal grant.

"The renovations are just the next step of reimagining the building and how to repurpose it," Luisita Newell says. "We're making this a place to go. We want to bring it back to what it was before, which was a cultural hub for this particular area."

Some parts of the building were remodeled and converted to offices in the 1970s; those areas are to be used for most of the newer additions. Those spaces are also to be designed to complement the 1920s-style aesthetic throughout.

As the newly named Riverside Event Center, the facility already has hosted weddings, nonprofit fundraisers, concerts and other performances since the beginning of the year, starting with a New Year's party. Even though many changes and upgrades are on the way, the center is still well-equipped to host events, and has a partnership with an on-site caterer.

Events manager Kimberley Scott says the current setup is unlike other old buildings that have been converted to event spaces. "It's quite ideal that there are already back service hallways," she says. "The building is unique in that most spaces connect to each other."

Though the envisioned future of the historic building is still that — a vision — word is spreading that the former Masonic Temple is open to host events again.

Young Kwak
The Commandry Room at the Riverside Event Center.

Young Kwak
The Falls Room at the Riverside Event Center.

Young Kwak
Tags attached to a backdrop pulley system in the Auditorium. 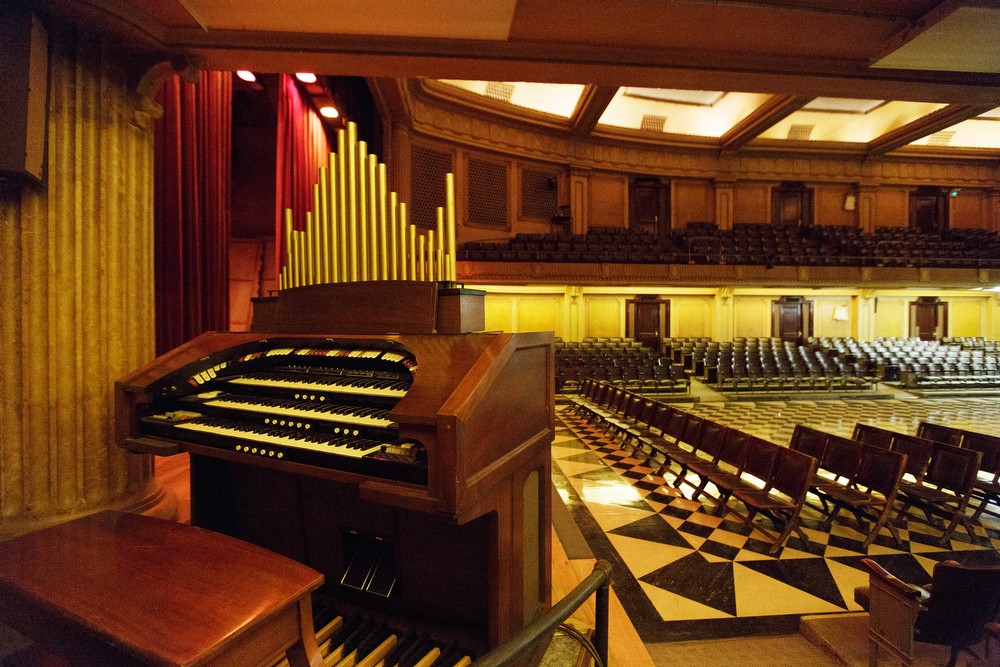 Young Kwak
An organ in the Auditorium at the Riverside Event Center.