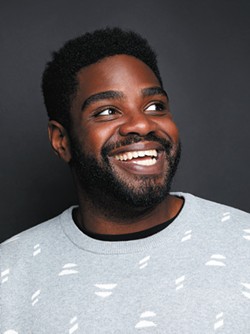 Ron Funches: "I realized very quickly I prefer stand-up and acting and writing for myself."

Most stand-up comedians are driven to take the stage for the first time by a passion for generating laughs, a need for attention, maybe even to slay some inner demons.

Ron Funches probably falls in that first category, a love of laughter, but he also moved to Los Angeles from his Oregon home turf and pursued comedy for an unlikely reason: career security.

"My son was diagnosed with autism when he was 2, and that kind of led me to think, 'I need to find a career, I need to find something to focus on,'" Funches says in an interview from a tour stop in New York City. "Comedy was kind of the only thing I was interested in starting at the bottom of, starting at the ground floor. I knew I had to bust my ass to make money because I have to feed this kid, and I didn't know how it was going to work out — it doesn't seem like it should — but it did!"

Indeed it has worked out. In the 12 years since Funches first tried stand-up — in which his autistic son, his love of marijuana and addiction to video games all generate jokes — Funches has become a force in American comedy. He's a talk-show favorite thanks to his giggly teddy-bear demeanor that belies some razor-sharp observations about society, and his skills as a writer earned him gigs penning gags for The Eric Andre Show and Kroll Show. He also landed major roles on network sitcoms like Undateable and Powerless, and next year he'll film his first starring role in a feature film alongside Luke Wilson in The Shitheads.

Looking at a resume like Funches', there's no denying the hustle involved. But the 35-year-old still considers stand-up comedy his favorite thing, even though he's been taking acting classes for a good five years. In stand-up, he's able to fuel the comedic voice he's developed for more than a decade, a voice that is unlike any of his peers.

"I try to shy away from writing for other people," Funches says. "I was able to do it for a couple of really special things, the Nick Kroll show and The Eric Andre Show, because those were fun people and my friends. But I also had a hard time. The way I write and voice in which I write is very unique, so it always sort of sounds like me. I had a hard time changing that. I realized very quickly I prefer stand-up and acting and writing for myself."

Funches' love of comedy started at home, where his family — first in Los Angeles, then Chicago and eventually Salem, Oregon — watched a lot of stand-up specials. And Funches found himself drawn to the hijinks on I Love Lucy when he was a kid. "That was my favorite show, and still is my favorite show," he says.

He was working various dead-end jobs (like being roadside Statue of Liberty for Liberty Tax Services) in his early 20s in Salem when he started thinking of trying stand-up. He wrote down jokes while he was at work, even though the self-described shy guy was "scared and terrified about doing it." Eventually, Funches looked up an open-mic spot in Portland and forced himself to drive up and give stand-up a shot.

"I'm pretty sure I didn't do that well, but I did good enough," Funches says. "People laughed, and that gave me that buzz that I'd never felt before. I remember I'd parked my car around the block and I couldn't find it for a half-hour. I was just walking around in a daze. 'I don't care if I ever find my car! I found out what I'm going to do with my life!' It was an awesome feeling. I've been chasing it ever since."

When Funches visits Spokane Comedy Club this weekend for four shows, it will be hot on the heels of his taping a new Comedy Central special and album in Seattle. It's an hour of material he's been honing for a long time, and he's looking at the Seattle show as a "way to celebrate it, and hopefully perform it the best I have, then move on and start working on new things. That will be going on in Spokane."

The Lilac City actually evokes some fond memories for Funches — although they're probably only fond in retrospect now that he's made it.

"I did some bar shows there when I first started out, and I'll try not to hold what happened to me against [Spokane]," says Funches, who considers his newer jokes "more open-hearted and optimistic" than many expect from a comedian in 2018. "[I was] bombing! But it was my fault. It wasn't just Spokane, a lot of cities were in agreement at that time."

Thankfully for Funches and his fans, those days are gone.

The original print version of this article was headlined "Cuddly Character"