At the Spirit of America rally, Republicans set aside their internal divisions to bask in the glow of the nascent Trump presidency — but for how long? 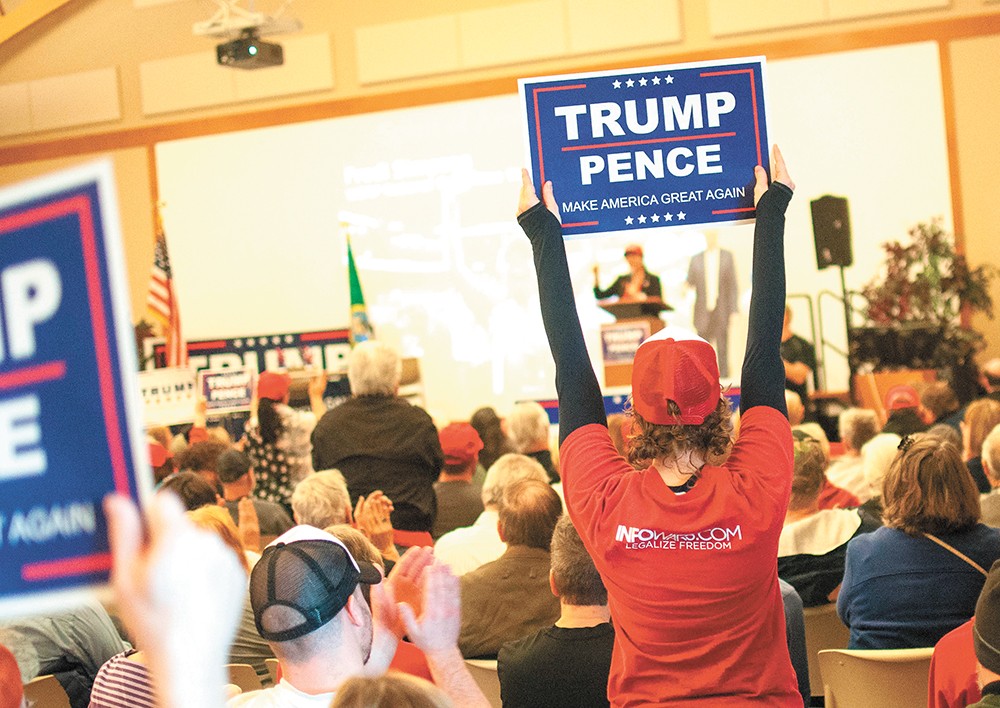 Daniel Walters
Supporters of President Donald Trump gathered across the country — including in Spokane Valley — to celebrate his agenda.

don't have to whisper anymore.

At least, not here, not at the pro-Trump Spirit of America rally on Saturday in Spokane Valley. There's not a liberal, pink-hatted protester in sight. The hats here are all red and white and want to Make America Great Again. Here, "Deplorables" is a badge of honor.

Plenty of those in the crowd have spent years warning that this country was inches away from the economic, political and cultural "abyss." And though there are still warnings here — of liberal forces who want to cause mayhem or violence in their obsession to stop President Donald Trump — now the doomsaying has shifted to an exuberant optimism.

As Northwest Grassroots activist Cecily Wright emcees the event, she sketches the Trump campaign as a tale of a scrappy underdog coming from behind to defy the odds. She remembers a time when many of the people in the local party avidly opposed Trump in favor of his rival, Texas Sen. Ted Cruz.

"It seemed like at that point the world was against Donald Trump!" Wright says. "And now it just makes the Trump presidency and victory so much better."

Today, local Republicans say they're more united than ever. At least temporarily, Trump's election has allowed the local GOP to paper over their internal conflicts and follow the new leader.

"Please help me welcome Sheriff Ozzie Knezovich to the stage!" Wright says to an applauding crowd. "I want you to learn! I want you to learn what it means for the law enforcement community to have a 'law and order' president in the White House."

Knezovich wasn't exactly a Trump fan. He voted for Ohio Gov. John Kasich in the primary. As late as last September, he described the election as "the worst case scenario" and said he was "torn in my own mind about a lot of this."

But today, with a cardboard cutout of Donald J. Trump propped up behind him, Knezovich sets all that aside.

"I'm watching their way of life being destroyed by nonsense," he says.

"What's the first word in the two words we're dealing with? It's called illegal," Knezovich says. The crowd erupts in a standing ovation. "Until Congress changes this word, we do our jobs!'"

He points to the recent spike in high-profile cop killings. The statistics may say that more cops died each year in the 1970s and '80s, but he argues that this is different.

"Never in the history of my industry have we been hunted and assassinated," Knezovich says.

At one time, he placed the blame for these killings not only on the radicals of the left, but the radicals of the right who spread fear about police militarization. He's accused Wright and other local Republicans of spreading lies and propaganda about him and his deputies — urging the public to blame them if anything happened to his deputies.

But not today. Today he points his finger at one target.

The crowd goes wild. He says that Obama could have united this nation. Instead, he believes that, because of Obama's quick-on-the-trigger criticism of law enforcement, the former president took us "back 50 years."

Two years ago, Wright blamed Knezovich for lumping her and her allies in with white supremacists, Nazis, and other extremists. At this rally, she offers nothing but praise for Knezovich.

"We are a lucky county, don't you think?" Wright says.

Spokane County Prosecutor Larry Haskell, by contrast, was a Trump supporter before it was cool. Even for this crowd.

He walks up to the Law and Order theme. He puts on a star-spangled USA baseball cap he got at the Trump inauguration.

"Today, it's funny, you can actually get some looks from people because you wear an item that advertises the United States of America," Haskell says. "But that's changing."

Haskell launches into a paean to Trump, military service, the rule of law and nationalism.

"Patriotism is what motivated me to first listen to Donald Trump," Haskell says.

He says that Trump reached out to every American during the campaign. He says that Trump's going to create jobs, simplify the tax code, stand by law enforcement, and fight illegal immigration in order "to make American citizenship valuable again."

"Resist the resistors!" Haskell proclaims to the crowd, "Use every ounce of strength that you have to help the president make America great again!"

Daniel Walters
Sheriff Ozzie Knezovich hasn’t historically been a Trump fan, but at the Spirit of America rally, he made new waves of controversy by blaming Obama for dead cops.

At work, Spokane City Councilman Mike Fagan is hopelessly outnumbered. He's the sole conservative on the council. But here? These are his people. They applaud. They laugh at his jokes.

Fagan urges the crowd to support reversing a rule mandating that public buildings allow transgender individuals to use bathrooms of their choice.

"If anybody needs to be convinced that this is a policy we need to repeal in Washington state, I'll be more than happy to follow you into the bathroom and see how you feel about that," Fagan says. The crowd chuckles.

Political correctness, after all, was one of the many things that Trump vanquished. That's evident here too.

You can get your photo taken in front of a makeshift, oversized "basket of deplorables" — a riff on Hillary Clinton's controversial remarks about half of Trump supporters. One attendee wears a T-shirt mocking the iconic Obama HOPE poster; it features Bill Clinton and says "RAPE."

Fagan slings one-liners back and forth with Spokane City Council candidate Tim Benn.

"Let's bring a photograph up here, to let the folks know who it is that Tim is going to be running against," Fagan says. A giant picture of 28-year-old city council candidate Kate Burke standing beside former president Bill Clinton is projected against the wall. "You know, I first looked at that picture, and the first thing that came to mind is, 'Hey, where's Bill's hand?'"

A shriek of laughter erupts from the crowd.

Fagan's fellow councilmember, Breean Beggs, gets roasted as well in service of their preferred candidate, Tony Kiepe. They project an old Inlander cover with Beggs' headshot 20 feet high onto the wall.

He slams Beggs' flirtation with a sugary beverage tax, a sidewalk levy, and his "unconstitutional" efforts to regulate oil trains.

"It's about ready to get really, really interesting in the city of Spokane," Fagan says.

Yet even amid the apparent unity at rallies like these nationally, there's a sense of the strain in the Republican Party, a strain that may once again crack into fissures as Congress considers politically dicey questions like immigration and health care.

Clint Didier is a rancher from Eltopia in Franklin County who almost beat fellow Republican Dan Newhouse in Washington's 4th Congressional District election in November 2014 before being routed by Newhouse in last year's rematch. On Saturday, he starts his speech with a bit of Braveheart-style spectacle. He screams "FREEDOM!" as he plunges a sword down into a bucket.

Didier paints Republican politicians in Congress as weaklings who "quibbled" and "buckled" even as patriots like him gave them majorities.

But now, he says, the patriots handed them Trump, a true warrior.

And now, he points to the fact that Republican politicians, despite previous Obamacare repeal bills being vetoed more than 60 times by the former president, still haven't put a new repeal bill on Trump's desk.

"Y'know, I predicted the Democrats would stall, undermine, delay and destroy. But we have the majorities!" Didier says. "Ronald Reagan said, 'When you can't make them see the light, make them feel the heat.'"

The crowd whoops and cheers. Yet it highlights the danger for Republicans ahead, as rhetoric meets the harsh light of reality. The health care bill proposed Monday by House Republicans was savaged by both the left and the right.

And for Republicans like Knezovich — condemned by local Democrats for his comments regarding Obama — there's still the sense that intraparty conflict has simply been put on pause at the Spirit of America rally, instead of being erased entirely.

Spokane Valley Rep. Matt Shea, Knezovich's longtime local nemesis, wasn't at the Spirit of America event. Knezovich says he was told that Shea wouldn't show if the sheriff did.

"[Then] I wouldn't miss it for the world," Knezovich recalls replying.

Knezovich assures the Inlander that he hasn't become a full-fledged Trump supporter, despite his positive comments at the rally. He's still worried about Trump's divisive rhetoric.

"I still have some concerns," Knezovich says. "But I'm going to give this president the same opportunity as the last president, who I didn't vote for, to be successful."

Like more than a few Republicans, Knezovich says he voted for Trump because he just couldn't bring himself to vote for Hillary Clinton. Now, he's waiting to see if he made the right choice, or if Trump will disappoint him as thoroughly as Obama did.

"I held my nose," Knezovich says, "and I hoped that this turns out well." ♦