A man in Chewelah says he can communicate with Sasquatches and aliens, and also find water in the ground 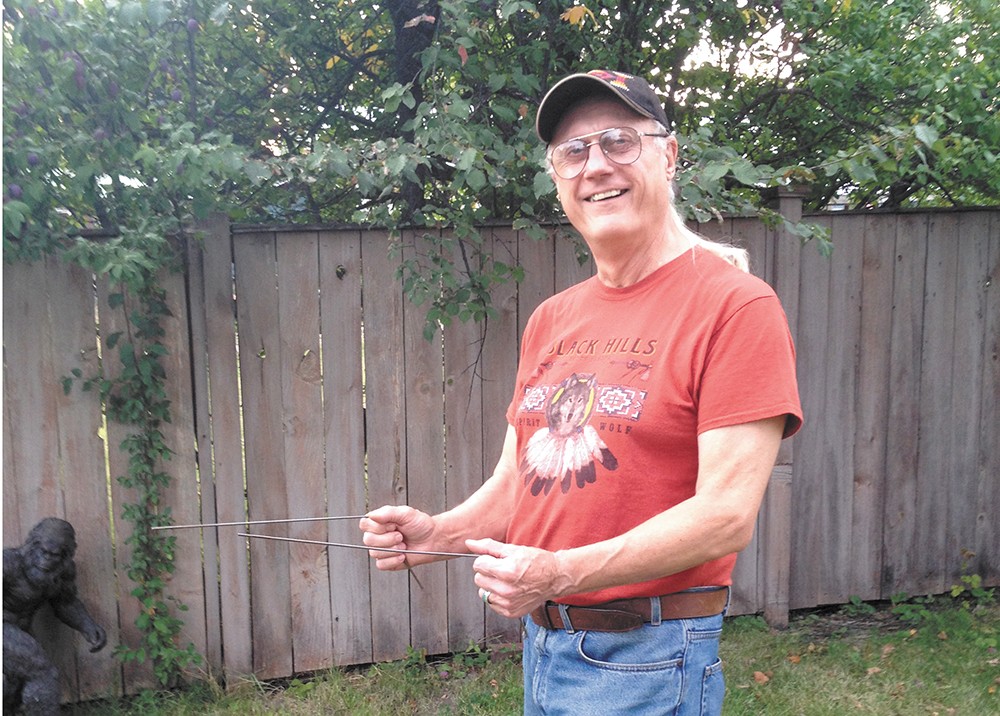 Kewaunee Lapseritis with his dowsing rods.

his first name Apache for "he who travels in search of knowledge and brings that knowledge back to his people." He's a social scientist and anthropologist, and also a master dowser who says he's helped more than 100 people find water.

As if those credentials didn't already have you leaning in with curiosity, just wait. Lapseritis also claims to communicate with Sasquatches and aliens telepathically, a distinction that's made him a frequent guest on paranormal TV and radio shows and has inspired his two books.

Born in Greenfield, Massachusetts, Lapseritis was brought up on hunting, fishing and trapping. When he was 12, he stumbled across a Sasquatch article that inspired him to begin his journey into the world of paranormal phenomena. He began writing to Rutgers University and other research institutions worldwide, seeking more knowledge of these Sasquatch people. He's now 58 years into his research of cryptoanthropology, the study of hidden people.

With a strong, muscular build, Lapseritis is a proud 72 years old. With laughing Rodney Dangerfield eyes, he can throw out some amusing stories, spinning the seriousness of life into comical satire. But he's straightforward and serious about his work, much of which was inspired by a night 36 years ago, he says.

"My first encounter with a Sasquatch started back in September of 1979. He started talking to me telepathically, and I was puzzled," says Lapseritis.

As outrageous as it sounds, every time Lapseritis thought something, the Sasquatch would answer. Then, as if talking to a Sasquatch wasn't enough, he says an alien contacted him telepathically right after that.

"I said 'I don't see you.' The ET answered, 'I'm what you people call a UFO. I'm just above you in another dimension,'" recalls Lapseritis.

He claims they told him to write a book about his experiences, and he has two to date — Sasquatch People and The Psychic Sasquatch & their UFO Connection.

Lapseritis has been a world traveler, living in Japan, East Africa, England and Australia. His ongoing research on the Sasquatch eventually landed him in the Seattle area. Upon wandering deeper into the forest of his research, he strayed away from urban life to interact with the Sasquatch people. He and his wife, Kelly, finally moved to the Chewelah area last year, noting that the Sasquatch said to move to a safer zone.

Exploring more of Lapseritis' unusual world: He delved into divining 36 years ago and discovered he also had the gift of dowsing. He asserts having found missing persons, pets, lost objects, minerals, oil, plants, wild animals and unusual phenomena. When it comes to finding water, he says he's accurate about 85 percent of the time.

"Over the years I have helped people find 123 water wells, in which I can also tell the depth of the underground water source, and how many gallons per minute they will get out of that well," he says.

In the 1980s, Lapseritis became well-known around his southern Oregon community for his dowsing ability. In a 1986 Eugene Register-Guard article, a mechanic detailed how Lapseritis had helped him find a missing carburetor part; others praised his water-finding abilities. Around this time, Lapseritis says he also helped law enforcement agents track down a wanted killer. The same piece ventures into Lapseritis' thoughts on Sasquatch and aliens, and the intersection of the two. Around that time, he was just going public with his claims about communicating with these paranormal entities.

"I totally admit that all of this is bizarre," he told the paper back then. "I know that it sounds very unscientific to discuss this. It's hard for me to share this reality, and it still worries me at times. I could be ridiculed. I could hurt my own credibility."

Nearly 30 years later, Lapseritis has embraced the bizarre and made a career out of it. When people ask how he implements his dowsing magic, he explains the best he can:

"You feel an energy within the body. Keep in mind, as far as water dowsing, our bodies are 85 to 90 percent water, so like attracts like. This also means whatever is in your system, or thinking of, can be attracted. I often start out dowsing on a large map, then go 'field-dowsing' ... I go to the area when possible, using rods and a pendulum."

Lapseritis asserts further that he basically talks to the universe, and the universe will react back in doing so. He chuckles, realizing that his skeptics may roll their eyes at a statement like that.

"Why would I, as a social scientist with 10 years of college, want to dabble in dowsing for 36 years in helping people if it didn't work? I wouldn't waste my time if not... It's never completely been scientifically proven, but to me, science doesn't have all the answers, namely because it's based on an antiquated empirical model," says Lapseritis. "It's limited and does not include universal reality. They can't explain things like Sasquatch, UFOs and psychic phenomena." ♦