Director of food and beverage, executive chef of the Red Lion Hotel's Dam Bar and Grill 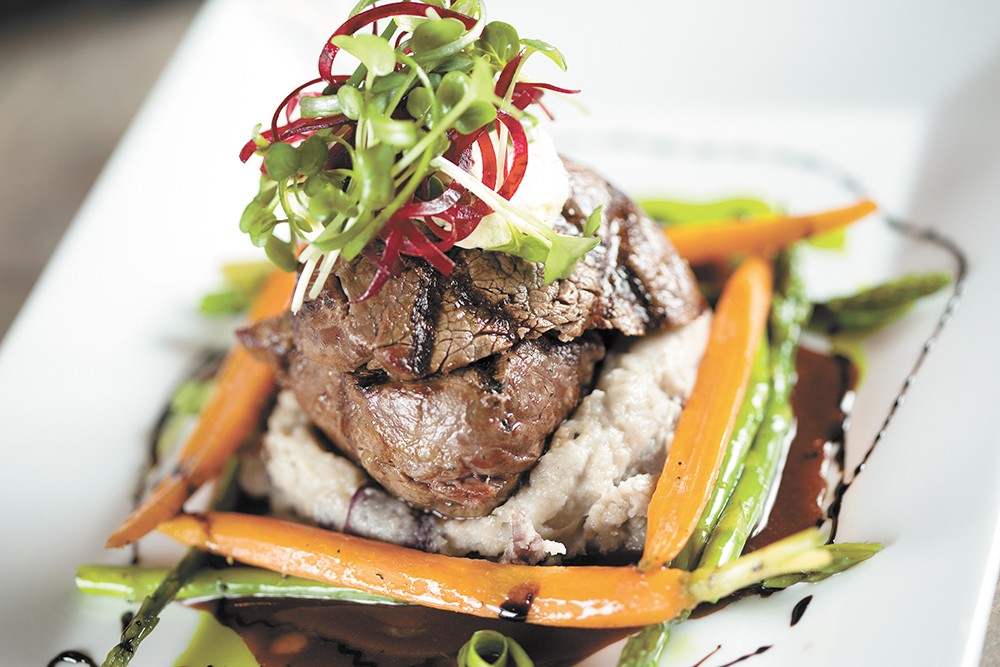 drawn to the area after hearing his fellow National Ski Patrol friends talk about the Inland Northwest snow and the vibrant city in close proximity to ski locales. In his culinary past, he's apprenticed under Chef Jesse Lapitan of the Palace Hotel in San Francisco, worked with Food & Wine magazine and was a producer for the Top Chef season three finale. He joined the Red Lion a few months ago, shortly after the hotel replaced the Park Place Lounge with the Dam Bar and Grill.

How are you incorporating local items into your menu?

RUTTER: The carbon-neutral footprint of that is using [foods] indigenous to the area, Yakima Valley, Green Bluff — I use Green Bluff Granny Smith apples, Green Bluff apple cider, my kurobuta pork loin is using Green Bluff products. I have Harper Farms out of Oregon, because I'm using the Harper Farms hazelnuts. So I've really tried to work with some of these local farmers and greenhouses to go not only farm-to-table from our center of the plate, [but source also] from Snake River Farms in Boise, Idaho, to also looking at [bison], adding some more additional items on our menu — items of roasted local beets with Wyoming Whiskey-macerated dressings.

Why are you guys participating in Restaurant Week?

We're excited to launch some higher-end items. We're going to be featuring the cedar plank salmon [and] the Snake River Farms Green Bluff apple cider brined pork loin with some sweet serrano honey butter [and] sweet potatoes that have a [chipotle demi-glace] ... I want to bring some folks over here and give them an opportunity with Restaurant Week to really taste our mountain eclectic and local, indigenous-to-Spokane vibe that we have here.

What inspired you to put those items on the menu?

I tend to work with the three S's — smoky or savory, sweet and usually some Sriracha or heat. So the pork loin, for example, has a sweet [flavor]. It's brined. It picks up a lot of flavor from the Green Bluff apple cider [brine] ... We're pan searing that. We're adding the sweet potato hash. So we've taken sweet potatoes, we've slow-roasted those. We've then taken them, we've cooled them, we cut them, we take those and caramelize those with a touch of honey serrano butter, and it really coats them nicely. So you have this sweet and heat, even on the sweet potato hash.

The cedar plank salmon... we are even brining the cedar planks, we have a touch of water and liquid smoke, so it really infuses the cedar planks before they hit the grill. But the salmon, we're using wild-caught sockeye and we're taking an Oregon goat cheese and mixing it in with some black quinoa.

These folks that are coming in will have the ability to try some items that take many steps but look visually aesthetic, taste amazing and are done during Restaurant Week at a price that really lets everyone taste the three courses here. ♦

Speaking of Meet your Chef , The Dam Bar & Grill