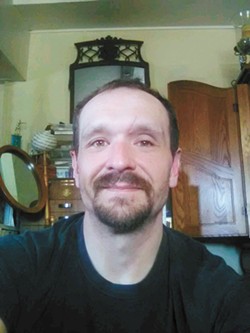 Paul McNutt says, "Life is better than it ever has been."

For a lot of us, this pandemic has been about just hanging on — to our sanity, to our health, to our sobriety.

Paul McNutt knows the feeling. When the Inlander called him a year ago, he was on the ragged edge. He'd gone two months without using meth. But his grandma had died, the pandemic had hit, the lockdowns had shuttered his Narcotics Anonymous meetings, and the temptation to use again had him desperately dialing a number on the Narcotics Anonymous pamphlet for support.

Two months ago, McNutt called the Inlander to tell us he was a year sober. Today, he's overflowing with joy.

"My life is better than it ever has been," he says. "I've got my driver's license back. I've got a newer used truck. I work at Ameristar Meats. I'm a beef grinder. I work with a phenomenal crew. I've got respect in the workplace again. I've got self-respect again. That took a long time to get back."

Yeah, there were tough times, he says. Christmas was even more depressing than usual.

"When you turn on the TV, it's nothing but bad news," McNutt says. "People are dying everywhere."

Sobriety takes a hell of a lot of work, he says, especially during a pandemic.

"You have to substitute the time you were an addict with other things to keep you sober," he advises.

So he says he started going for long walks. He visited every single public park in Spokane. He started bowling with his co-workers. He began attending church on Sundays, redisovering the religious faith that he'd lost after his brother's suicide four years ago.

"I'm definitely willing to send the message of sobriety out to the world," McNutt says. "I sent an email to the Ellen DeGeneres Show, but she never got back to me." ♦

The original print version of this article was headlined "Sobering Year"