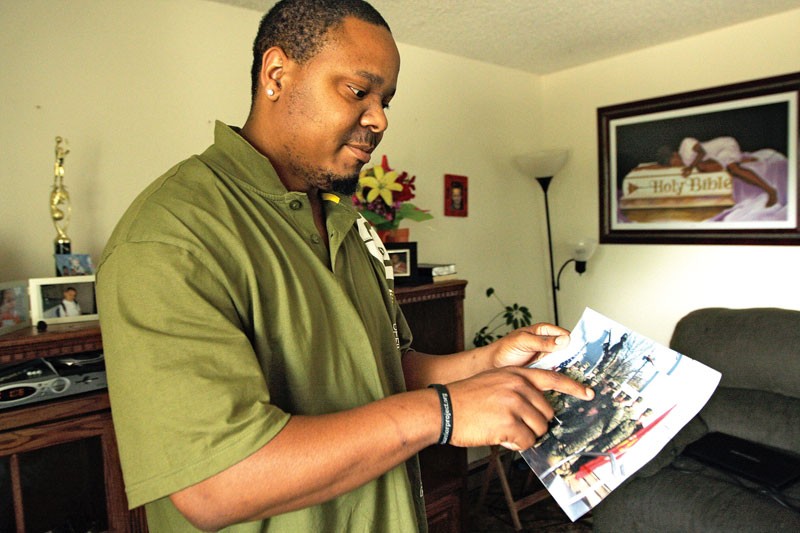 Young Kwak
LaDeitrich Jones served 10 years in the Marines, with two tours in Iraq. Now hes a graduate of an innovative court program in Spokane.

He remembers all that, but he doesn’t remember trying to choke his girlfriend, Tosha, in his Spokane apartment a year later.

Jones, 30, looks the part of a Marine: tired eyes, a weary smile, broad shoulders. His ears are studded with earrings, and his voice is calm as he talks about his three kids and his plans for the future.

“It’s not as bad once you start talking about it, once you start the healing process,” says Jones, who has been diagnosed with post-traumatic stress disorder, and now attends regular counseling sessions and is close to finishing his associate degree at Spokane Community College.

Jones is one of six veterans who graduated from an innovative court program in Spokane in August. The Spokane County Veterans’ Court strategy mirrors that of DUI or drug court: It addresses the problem with therapy, not incarceration; treatment instead of warehousing. The veteran court model started in Buffalo, N.Y., in 2008 and has since spread across the country.

In Spokane’s court, about half of the 60 veterans have been charged with domestic violence and half are facing DUI charges, says Judge Vance Peterson, who started the court last September.

“Most of them recognize they have done something wrong. They recognize they have to be held accountable,” says Peterson, who was a green beret and member of the Army for 28 years. “But we’re not going to brutalize them in the process. They’ve been through enough brutality.”

Qualifying for his court is no easy process. First, charges a veteran faces can’t be serious felonies or sex crimes. Once they enter the program, they receive counseling and other resources aimed at helping them address their particular set of issues. They agree to regular parole stipulations, like avoiding alcohol if they’re facing a DUI, and have to attend at least six sessions of counseling.

The court’s required counseling sessions are part of the Veterans’ Forum, a nonprofit set up in conjunction with the court to offer mental and practical assistance. About a dozen groups from the area, such as Goodwill and the Center for Justice, show up to offer classes, medical care, food and fuel vouchers.

In most cases, the veterans have been diagnosed with post-traumatic stress disorder or traumatic brain injury. So far, only one veteran has failed to complete the program.

“We’re not going to force anybody into this program. That is not successful,” Peterson says. “But once they opt in, we hold their nose to the grindstone.”

This past spring, the U.S. Department of Defense reported that about 137,000 soldiers are deployed in Iraq and Afghanistan. About 15 percent of them will return home with PTSD or TBI related to their combat experience, according to The New England Journal of Medicine.

Paul Nicolai, director of the behavior health program at the Spokane Veterans Affairs Medical Center, says 3,677 Iraq and Afghanistan veterans have sought services at his hospital since 2002, just before the invasion of Iraq. Up to a third of them have shown symptoms of PTSD, he says. While the hospital doesn’t track how many of those veterans have ended up in some kind of trouble with the law, Nicolai says it’s not uncommon.

“You never know who it’s going to be,” he says. “This is a group that is more vulnerable than the general population.”

Veterans’ Court Probation Offi cer Tim Sigler says therapeutic courts work because their principles are fundamentally different than those of traditional courts. They still serve to protect the public, but in a way that he says is more just.

“Our values are looking more toward social justice and the dignity of a person, acknowledging more about a person than just what crime they committed,” Sigler says.

This type of support was lacking when veterans returned from the Vietnam War, but Dr. Anna Medina says she and others are trying to change that for this generation’s service members.

Medina, who teaches a trauma seminar at Gonzaga University and has presented at two of the veterans’ forums, hopes to use the veterans’ experiences to study the homecoming process and help non-veterans know how to be of some help.

In talking with students, Medina says there’s a misconception that “when you come back you either have PTSD or you’re fi ne,” which makes it hard for the veteran and civilian worlds to communicate about veterans’ issues.

“I think there are people who are very appreciative of what these people have been through and we just don’t know how to be of service to them,” she says.

Jones knows his struggles aren’t over. He still feels anger. He still has nightmares. When that happens he thinks about his daughter, Mae’lyiah, who was born just after he returned from Iraq in 2009.

And he’s thinking about the veterans’ court and where he might be without it. “Jumping off a bridge or in jail,” he says. “I’d have nothing to live for.”