How a Hawaiian voyage with a pregnant sea captain, a famous boat and some jellyfish led to beautiful music. 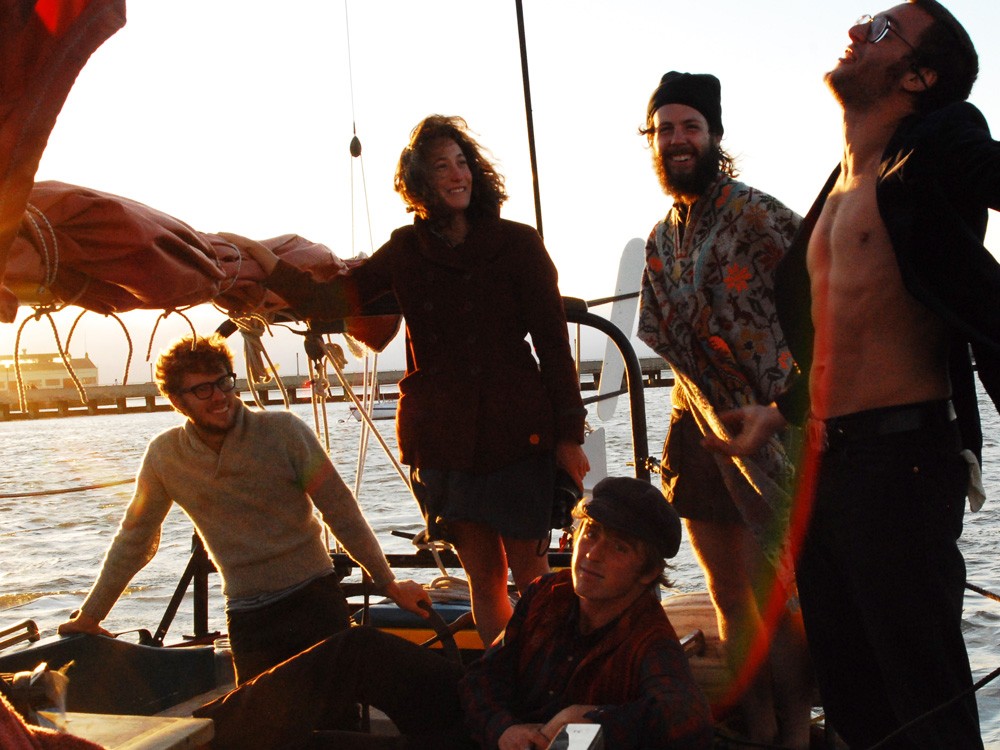 Everyone was sick. Rolling over the huge swells of the Pacific Ocean in a 33-foot sloop has that effect, especially when your only other sailing experience took place on the calm waters of the Puget Sound. So Stelth Ulvang and his new friend Griff Snyder, who would later become the other founding member of their band Dovekins, weren’t particularly surprised that seasickness had taken them. But their captain — she shouldn’t have been as ill as she was. This was just another drop in a bucket of problems that had plagued the trip since its inception.

Ulvang met Snyder through mutual friends, but the two hardly knew each other when Snyder offered Ulvang a spot on a four-person sailing voyage across the Pacific, from Hawaii to the main land. Ulvang accepted without hesitation, but when he arrived in Hawaii, their plans began to unravel.

The initial fray began with their vessel, The Return of Dove. The sailboat’s history is romantic. It was originally owned by world-famous sailor Robin Lee Graham, who had used the boat and its predecessor to circumnavigate the globe alone at age 16 — a voyage that was later made into a book and a movie. Here in front of Ulvang and Snyder sat an intricate piece of Graham’s legacy. But for all its former glory, it wasn’t seaworthy.

“We kept finding things wrong with it,” says Ulvang. “We ended up staying in Hawaii for a month when we were originally intending a week and a half.”

After a somewhat turbulent month onshore (Ulvang got arrested after trying to steal supplies to fix the boat), they finally departed. Then things really started to fall apart. The delay in their departure had pushed their trip into winter, storms making for rough seas, and rough seas making for seasickness. Then, on day three, the captain gave the men a new take on her seasickness.

“The captain decided she was probably pregnant,” says Ulvang.

The trip was over, and they returned to Hawaii with no money, no food and no direct way home to Colorado. But the bizarre series of events that had plagued them for the past month hadn’t been completely without benefit. To pass time, the two had begun to play music under the name Dovekins, as a tribute to the doomed boat.

Their sound now, with the addition of three members, is reminiscent of a symphony warming up before a performance — independent melodies crossing paths, a bizarre ebb and flow of sound. It’s not chaos, but it’s not tightly bound by a rigid structure, either. Despite having written new material since, the band has held onto songs written during their time in Hawaii. Some, like “Jellyfish,” off their debut album, Assemble the Aviary, are a direct snapshot of their experiences there.

“This big prison guard was having all these prisoners cleaning out the bay, and they were scooping out all these live jellyfish,” says Ulvang. “They were cleaning out, you know, trash and cups and all this stuff, and this huge guy is commanding all these dudes to scoop out all the jellyfish, too, and throw them in the trash bags.”

Although “Jellyfish” is tinged with an apologetic tone, that sentiment is not characteristic of the rest of Dovekins’ repertoire. Banjo, clarinet, upright bass, accordion, guitar and drums — as well as a host of other oddball instruments — make for rambunctious, danceable songs.

“We’ll do anything and everything at this point,” says Ulvang. “Because whatever is piquing our interest we’ll try to play.”

This approach to music is a symptom of an overall laissez-faire approach to life — the same tack that took Ulvang and Snyder out to sea and eventually to the rest of their bandmates. It seems like it’s working pretty well for them.