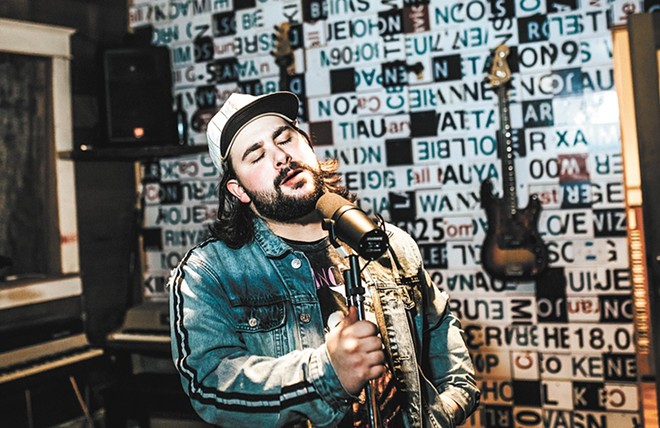 Alicia Hauff
Blake Braley's new EP Darlin' drops on streaming platforms April 24.
The future of live music might still be a big question mark, but local musicians aren't merely sitting on their hands during quarantine: A lot of them are finding a way to connect with their fans and putting out new material, even without the benefit of physical congregation. Here's a batch of some of our favorite new releases from the past month, and there will no doubt be more in the coming weeks.

Blake Braley, Darlin'
With his regular gig at Zola, Blake Braley and his backing band have found a devoted audience with their retro R&B stylings, and they come through loud and clear on his new EP Darlin'.  These six tracks run the gamut from lovelorn ballads to sexy slow jams to up-tempo party songs, driven by velvety smooth horn riffs and Braley's own soulful voice. Darlin' drops on all streaming platforms April 24; see his Spotify profile here.

Heat Speak, "Shimmering Façade"
This nine-piece band started as a vehicle for singer-songwriter Dario Ré, gaining attention with a unique instrumentation that implements cello, djembe and violin. The band plans to release an album titled To Love Wind in September, but in the meantime you can hear the single "Shimmering Façade," which begins mournfully and ratchets up into a bouncy, piano- and string-driven delight. Listen to the studio recording here, or check out a live version recorded at the Bartlett (RIP) here.

Vanna Oh!, "Social Distance Dance"
When we all started locking down, a lot of us wondered what kind of art would come out of the isolation. Lindsay Johnston, aka Vanna Oh!, has made use of the time with a new song appropriately titled "Social Distance Dance," dropping a couple months after the rollicking rocker "Chaperone." The result of a challenge from her followers, it's a funny, Pat Benatar-inspired tune about the perils of standing too close to people, complemented by '80s workout footage. Watch here.

Mike Miller
Jango, "Choices (Remix)"
The Spokane hip-hop artist Jango released his EP Alone by Choice three years ago (we wrote about it back in 2017), and to celebrate the occasion, he dropped a remix of one of its best tracks. In its original incarnation, "Choices" was a laid-back track buoyed by a bell-and-flute sample, but this new version, featuring new verses by Ben10 of Kung Fu Vinyl, is like a totally different song. You can decide which version you prefer; listen here.

Lavoy, "Don't Let It In"
Ever since they relocated to Spokane from their native Alaska, this quartet has been turning out shiny synth-pop that'll bounce around in your head for days after first hearing it. They've been putting out singles that will likely turn up on a future album, and their latest release, "Don't Let It In," sounds like it was beamed straight outta the '80s, shimmery and dance-y and a bit icy, all at the same time. Listen on their Spotify profile here.

Pest the Menace, This Is My EP
Spokane rapper Pest the Menace has been in the hip-hop game for a while now, and last week saw the release of This Is My EP, his first multi-track release since 2015 and the first of a planned three-part series. Conveniently shortened into the acronym "T.I.M.E.," the EP immediately pulls you in with its heavy production and Pest's smooth flow; turn up the bass real loud. Check out the EP on Spotify.

Fat Lady, "Lean On My Shoulder"
If ever there was a band to make you jones for an in-person concert, it's Fat Lady. The blues-rock group is electrifying in a live setting, but they've translated that energy into the new single "Lean On My Shoulder," a 7 1/2-minute slow burn that blends strummy acoustic guitar, spacey synths, ethereal strings and haunting sax. You'd almost swear it was a long-lost Houses of the Holy B-side. It's available on Spotify.