Sounds from the Great Beyond

Kawabata Makoto fights with his guitar to tame the sounds of space. 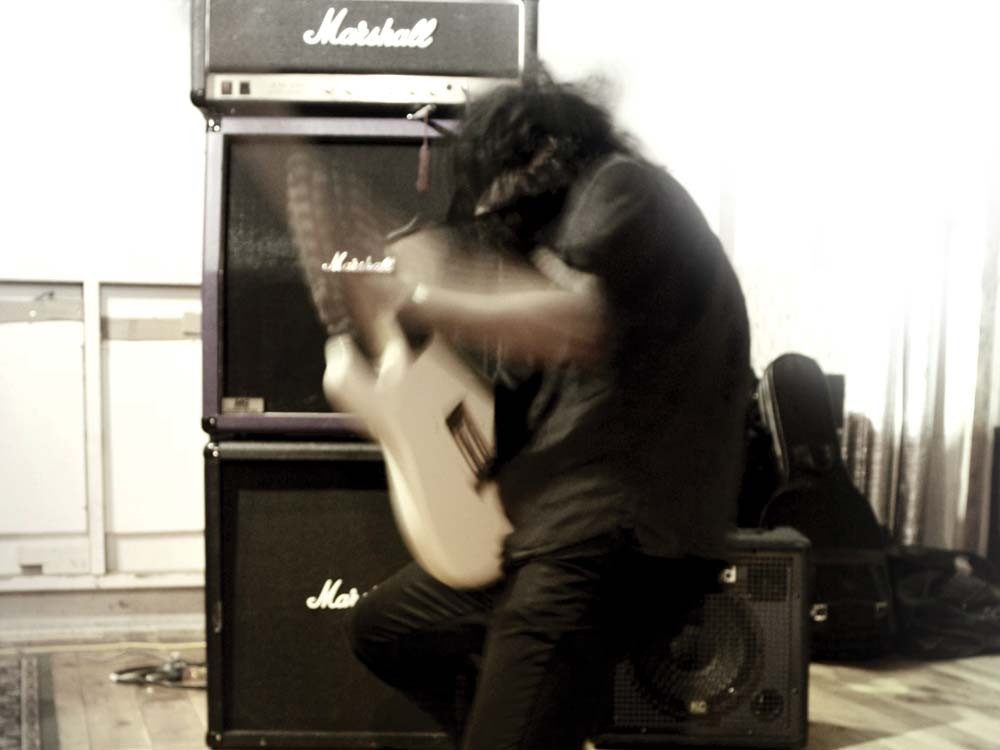 If you’ve seen someone try to hold a really pissed-off cat, then you have a good idea of what Kawabata Makoto looks like as he plays guitar. It’s as if he’s struggling to calm a beast — one that could escape his grip at any second. Playing guitar is a full-body struggle: a human funnel cloud of hair and fingers and wobbly, barely stable legs.

But some of the greatest rock musicians are the ones who beat up their instruments: Jimi Hendrix would embrace his guitar as if he were in a co-dependent relationship with it, only to light it on fire in the end. John Bonham hunched over his drum kit, pounding as if he were exorcising demons from the depths of his soul with every hit.

Makoto, the hypnotic guitarist in the Japanese psychedelic rock band Acid Mothers Temple, might be remembered in the same way if psychedelic, experimental krautrock made by an underground Japanese band ever becomes mainstream.

But Makoto’s newest project, with Pikachu Yasashii (formerly of Japanese girl punk duo Afrirampo), might have the best chance of any of his projects: Afrirampo became a Pitchfork.com favorite after touring with Sonic Youth and performing alongside Yoko Ono in 2005.

In their collaborative effort, simply called Pikachu * Makoto, Makoto’s riffs are sassed up by Pikachu, who wails nasally like Kathleen Hanna of Bikini Kill but plays drums with a Keith Moon recklessness.

Not a lot has been said about the Makoto-Pikachu effort, and setting the record straight is difficult if you don’t know Japanese. In an email interview with Makoto, The Inlander gleaned few bits of information from the guitarist: The duo’s first album is in the works, their onstage performances are mostly improvised, and one of Makoto’s biggest inspiration is Captain Beefheart (really?).

But through lines of broken English, the guitarist made one thing clear: Music is not something he feels he is creating — it comes from elsewhere.

What inspires you to create?

Makoto: All music comes from my cosmos. I try to be just great tuner.

How would you describe your writing process?

My cosmos tell me what to play, that’s all!

How much experimentation do you do onstage?

My cosmos tell me what to play, that’s all!

What are you thinking about as you play?

One thing, I try to be a better tuner for my cosmos.

So maybe Kawabata Makoto (or any of those great rock musicians, for that matter) isn’t wrestling with his own demons. Maybe he is merely a conduit conveying messages from somewhere far, far away.