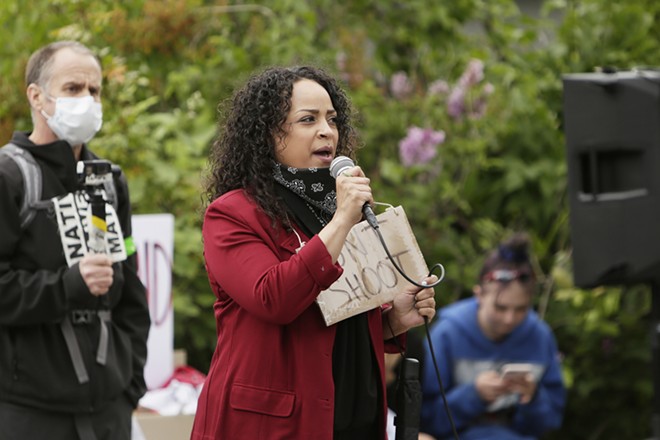 Young Kwak
Attorney Natasha Hill speaks at the Lilac Bowl Amphitheater at Riverfront Park.
D espite threats of violence, despite threats that white supremacists planned to counter-protest, and despite the fact that tear gas and other crowd control measures had been used on people in downtown Spokane just a week ago, thousands turned out to Riverfront Park in Spokane on Sunday, June 7, to hear stories of racial injustice, share calls to reform and defund police, and to support one another in a fight that for many has lasted decades.

Speakers who'd been invited by the Spokane NAACP and Occupy Spokane, as well as impromptu speakers from the crowd, take turns at the microphone, in some cases moving people to tears, in others moving them to calls for action.

Early on, those gathered hear from Kiantha Duncan, vice president of the Spokane chapter of the NAACP, who set the mood for the day’s peaceful afternoon of speeches and marching. She asks the crowd to sit down, center themselves, and prepare to listen.

She shares messages of love and calls for respectful behavior from those who might have come to stir things up. She calls on the crowd to remember that all lives matter, and black lives matter. Duncan also makes a specific point to ask all those in any type of law enforcement to consistently remind themselves why they took an oath to protect people in the United States.

Later, the crowd at the Lilac Bowl Amphiteatre hears from Inga Laurent, an associate professor of law at Gonzaga University, advocate for criminal justice reform, and frequent Inlander columnist, as she shares a poetic love letter to black America.

“Every day in this country we are complicit in a great and grievous lie. We are told in ways big and small, explicitly and implicitly that black folks’ contribution is insufficient,” Laurent tells the crowd. “Yet we all know in our bones, that it is untrue. … The marginalized, those who have toiled on this stolen land, with their blood, sweat, tears and lives, are the ones who created its possibility for prosperity.”

Wealth was impossible until it was pilfered, she continues.

“Make no mistake about it, we know the identity of America’s worst looters,” Laurent says. “Yes, this house, our America is one that was built on shifting sand, rather than a firm foundation.”

After all the Jim Crow laws, the redlining, the designer language that’s been used to attack minorities, the real threat of increased violence from those who are meant to protect our communities, Laurent chokes up as she asks the crowd, “How is it humanly possible that you keep forgiving? How do you manage to keep hope alive after all that you have experienced?”

“How does your heart not harden and ache?” Laurent asks. “Your grace is astounding, your patience awe-inspiring, and your resilience aspirational. If anyone has the right to be proud, it is you. Somehow you continue living out a creed that you could have long abandoned. I’ve read the gospels that preach turning the other cheek, but you act it out daily, and you do it amidst the hypocrisy of professed Christianity, those who lay claims to teachings they do not follow.”

Natasha Hill, an attorney born in Spokane and familiar with racism faced here by the black community, shares a passionate call to remember the roots of unjust racism in this country, including prejudiced concerns that black men might attack white women, white women who were also in many ways considered to be property.

Click to View 60 slides
“This country has continued to honor slave masters, and your symbols of slavery and oppression and racism are offensive,” Hill says. “Police were created to return people escaping from slavery back to slave masters. If you have joined the ranks, you should know your history and be prepared. You are complicit in the worst gang this country has ever seen. State-sanctioned, funded. That is why we are here, to support the message of Black Lives Matter, that the police need to be defunded.”

Many others take their turn, sharing their pain, lived experiences of racism, calls for an end to police killings and militarization, and messages not to lose hope.

Among the last group is Ava Sharifi, who recently graduated from University of Washington and returned to Spokane.

“You won’t know what that mountain top looks like. You have to paint a picture of what it looks like in your mind, because while you’re climbing that mountain, you won’t be able to see the top,” Sharifi tells the crowd. “When the going gets tough, when your hand slips, when your muscles cramp, the vision keeps you strong. You don’t need to know what the top looks like but damn it, you know it’s going to be beautiful when you get there, so you must keep climbing.”

She finishes her speech with a call-and-repeat, “We can. We will. We must.”

MARCHING INTO THE NIGHT

The crowd of thousands marches through Spokane, filling the streets as they walk toward and across the Monroe Street Bridge, later passing by a heavily guarded and barricaded Spokane County Courthouse, and instead continuing onto Boone and back on Washington toward the park.

Many different chants are led in pockets of the crowd, including "No justice, no peace, defund the police," and "Say his name: George Floyd."

Speeches continue for a short time after the group returns to the amphitheater, but the rain picks up and many clear out for the day.

But a smaller crowd of a few hundred sticks around at the Rotary Fountain, spending hours chanting for justice, dancing to music, and angrily calling out unjust violence against black and minority Americans by police. 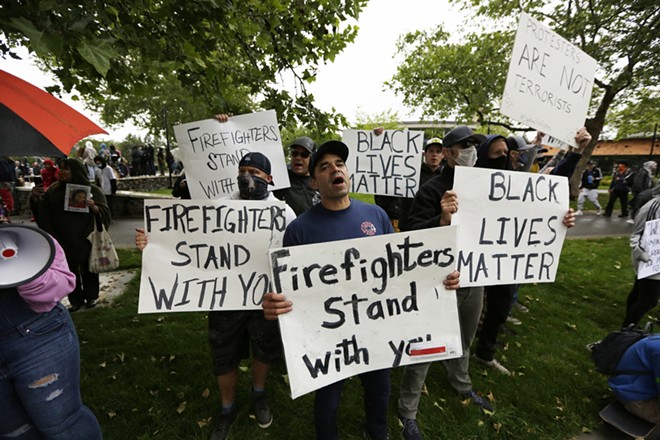 The group eventually leaves to march throughout the downtown core.

Hundreds continue their calls to have their voices heard, chanting "Black Lives Matter," "We have a right to be here," "Hands up, don't shoot," and "We want peace."

Despite blocking a small number of cars traveling through downtown, protesters are met with cheerful and supportive honks as they continue marching, with some vehicles following the crowd as it marches down into Peaceful Valley to continue the call for action.

After more than an hour of marching, the group makes its way to the courthouse, where law enforcement officials from the National Guard, Spokane County Sheriff's Office, Washington State Patrol and other agencies stand ready with riot gear behind metal barricades.

A helicopter that's been watching from above throughout the day appears to swoop over the crowd at one point, as protesters confront the officers about the injustices millions throughout the country have been protesting for weeks.

Renee White, a protester who uses a megaphone to speak to the crowd and officers, tries to bridge the gap between the crowd and police, asking protesters to step back from the barricades, before asking officers why they aren't out supporting the protest on the other side of the fence, and why taxpayer money pays for them if they're not protecting everyone. 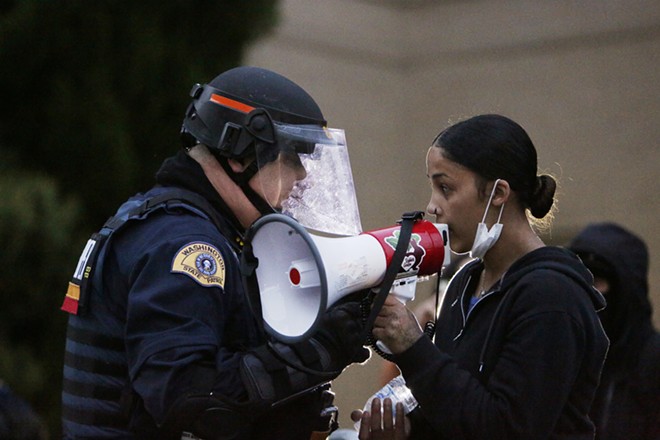 Young Kwak
Washington State Patrol Lt. Kris Schweigert, left, speaks with Renee White to help keep the peace with one group of demonstrators in front of the Spokane County Public Works building.
"There's no need for violence, there's no need for us to be against each other no more," White says. "Why are we paying y'alls paychecks when y'all not out for us? Are they for us?"

"No!" the crowd cheers back.

Soon after, White gets the crowd to march back downtown, with calls to continue protests throughout the week at Riverfront Park, meeting at the Red Wagon nightly at 6 pm until calls for reform are heard and enacted.