A passionate teacher turned North Central High School into a haven for genuine scientific research; now the district wants to do the same with other subjects 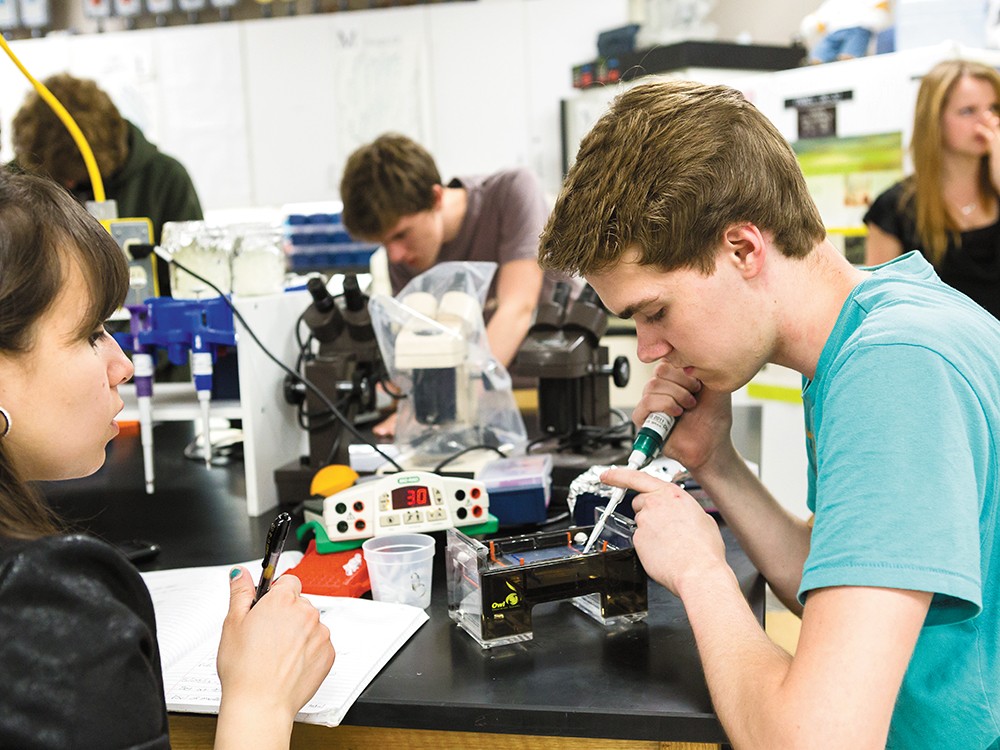 A student in a science classroom at North Central High School holds up a monochromatic slip of paper covered in streaks that look all wrong.

She’s right. The DNA in the sample has become tangled. “We’re going to solve this,” says Randy James, her ruddy-faced, enthusiastic science teacher. “We’re going to put this into a heat block at 65 degrees, see if you can get a release from the wells.”

This is far beyond vinegar, baking soda and paper-mâché. This is actual science. Rather than dissecting frogs or fish, James’ classes have gone deeper, deconstructing the DNA of Piedmontese cattle, minnows, bighorn sheep and a nearly 10,000-year-old ancient bison. They’ve investigated bacteria that break down gluten, which could be a lifesaver for those with celiac disease, and examined noninvasive ways to identify hybrids of spotted and barn owls. Today, they’re testing human DNA for transposable elements — segments that can move across the genome, activating or deactivating important traits. Meanwhile, genomics students work on complicated independent projects of their own design.

In the school’s stairways, student-written scientific papers (“A study of Genetic Variation in Richardsonius balteatus (Redside Shiner) within the Latah Creek watershed”) have been blown up bigger than poster board beside student body election flyers. Parents have transferred their students to North Central specifically because of the science program. And when 500 students filled the auditorium in April, it wasn’t to see a comedian or musician — it was to see Leroy Hood, a 74-year-old biologist.

Organically, without a statewide mandate or orders from a district committee, North Central has created the district’s only Institute of Science and Technology, with the purpose of producing the next generation of great scientists.

Now Spokane Public Schools administrators are examining whether other conventional schools can develop a similar specialization. Lewis and Clark High School is ready to supercharge its engineering program. Rogers is focusing on computer science. And Superintendent Shelly Redinger says someday she could see Shadle Park harnessing its success in business, and Ferris in the arts.

“We just are finding, for our community, that we want more options,” Redinger says.

The robot “Dreadnought” cost about $5,000, clocks in at 114 pounds and was created entirely to fling Frisbees. For a nationwide competition, the Lewis and Clark robotics club designed the machine, modeled after a skeet shooter.

Five years ago, Nate Edmons, then a physics teacher, saw how many students were interested in robotics. That’s when he knew there was an appetite for engineering. “I started to approach engineering companies, [asking] if you could design an engineering class in high school, what would you do?” Edmons says. Today, Lewis and Clark has adopted the Engineering by Design curriculum. Edmons wants his students to tackle real-world issues — and local companies like Triumph Composite Systems and Itron are assisting them.

Edmons say he was inspired by James’ work at North Central. “He’s doing important research,” Edmons says of James. “There’s no reason we can’t do similar research in engineering here.”

The district has given him a team to work with, moving three other teachers with an engineering background over to Lewis and Clark. This fall, he says, the school will launch the first year of a school-within-the-school academy focused on engineering.

At Rogers High School, the enthusiasm for computer science also started at a national competition.

In the CyberPatriot competition, a squad of Rogers students became beleaguered IT professionals, tasked with sitting down at a hacker-compromised desktop computer, plugging security holes, detecting and destroying malware, and repairing damage. Last year, of the 12 open teams competing at nationals, three came from Rogers.

Most Rogers students come from low-income homes, which has branded the school with a rough reputation. But this competition has offered Rogers a new, positive source of identity.

“The CyberPatriot program alone made people stop and think of our school a lot differently,” Yeigh says. “We’re kind of an anomaly. We’re ahead of the curve right now.” He discusses partnering with Eastern Washington University to offer college credit for taking certain computer science courses at Rogers.

Neither program is as advanced as North Central’s, but NC had a major head start. James has been building its program for about 15 years.

“The first $10,000-dollar grant, I realized I couldn’t buy anything,” James says. “I couldn’t even get catalogs from the true biotech and biochemical companies.” They wouldn’t bother with high schools. But then he approached them with the acronym NCHS — he thinks they mistook it for “North Central Health Sciences.” From there, he struck deals for pricey lab equipment with national companies, haggling for $70,000 scientific lab instruments as if they were antique crock pots at a summer flea market. Piece by piece, he constructed North Central’s lab.

“They’re 40-person labs for a reason,” James says. Besides high school students, he’d like to see grad students and Ph.D.s pursuing their own research there. In his vision, the lights in the laboratory would never go off.

If all these efforts sound teacher-driven, that’s intentional.

“I like programs to develop at the grassroots level,” says Redinger, the superintendent. “We want staff to be passionate about certain areas.”

Redinger can envision schools specializing in all sorts of subjects. Every school can’t afford to offer every language course, for example. But Ferris could offer Mandarin, while Lewis and Clark offers Japanese.

But giving students more options can challenge the neighborhood school model: What if students living within the Shadle Park boundary want to attend North Central because of its science program? Will a school bus take them? Will they be given city bus passes? Or are their parents stuck driving them?

The district is still discussing transportation policies, but the new programs face other hurdles. Each of these projects relies on money, community partnerships and, most crucially, at least one indefatigable teacher.

The district is aware that without someone like James, the North Central project would struggle. So in an unusual move, the administration tasked a recently hired science teacher to shadow James for an hour a day, team-teaching his class.

James doesn’t just serve as a teacher for these students — he’s a motivational coach, in a constant state of pep talk, peppering his words to them with dreams of Nobel prizes and scientific revolution.

So in the same way Notre Dame football players tap a “Play Like A Champion Today” sign as they leave their locker room, the students in James’ class slap a goofy sketch of Albert Einstein with the words “You Are the Ones.”